That small step, that giant leap

I mention this in a TGirl blog because for me this man was an icon. I grew up during the Space Race, one aspect of the Cold War which was the dominant international situation during my youth. Yet, in that antagonism and tension, with a fear of human annihilation, mankind also achieved some truly extraordinary feats. I am hard pressed to think back through history as to what might represent a greater achievement than sending men to the moon and bringing them home again. And to think that it happened in my lifetime!

Not only have I had a lifelong fascination with the stars ever since reading about spaceflight as a child, and especially after an inspiring school trip to the London Planetarium when I was 8, but I suppose Armstrong’s small step showed me that, with effort and dedication, extraordinary things can be done if you really want them to happen. With hindsight, the Apollo programme was a typically crazy product of the Cold War – insanely expensive with no proper plan to build on the achievement and mainly an attempt to get one up on the Soviets – but one of its legacies is that it illustrated that mankind’s dreams can become reality.

Don’t worry, I’m not mawkishly and childishly going to suggest that I too am living my dream blah blah, nor that Armstrong achieved stuff in some splendid godlike isolation (no hero does – they all have massive teams at work behind them, notably in this case the US taxpayer), but just to say that for me Neil Armstrong represents the achievable, however incredible, and the aspiration to achieve it.

I never met him – he seems to have elected to live quite isolated. But I met Buzz Aldrin, again through school. It was spellbinding to listen to him and imagine being up there, too.

I still plan to get to the moon myself before I die. My boots will be much nicer than Neil’s, though.

Posted by Sue Richmond at 00:04 No comments:

Yesterday I was invited by Rachel Cole to join a group of girls associated with the Adam & Eve dressing service so, after half an afternoon's shopping and strolling in my favourite parts of Covent Garden, I took the hot Central Line tube out to Brick Lane, best known nowadays as the title of Monica Ali's novel and the place to eat Indian food in London.

I met Rachel and her pals Helen, Denise, Stephanie, Gillian and Mandy at the relaxed Verge bar. Mandy I already knew from the TGirl bar at Erotica but the other girls were new to me and very nice to talk to. Adam & Eve seems to have an enthusiastic following. I used to be a Boudoir girl when I used a dressing service, so we compared notes about style and experiences.

Stephanie, Gillian and I went down Brick Lane for a curry. The food wasn't bad at City Spice and the total bill was perfectly reasonable. The red wine, though, was served at considerably higher than room temperature! Maybe those southern Italian volcanoes were still at work in it! But as it was free we could hardly complain!

A pleasant way to spend an evening in the middle of the week. Stupidly, I forgot my camera! (TGirl + no camera = fail!) so I will be relying on the other girls' charity for a record of the event.

Add: There's a lovely photo of us on Stephanie's Flickr pages - three pretty TGirls amid the bright lights and bustle of Brick Lane http://www.flickr.com/photos/stephaniemonroe/7857488000/in/photostream
Posted by Sue Richmond at 19:32 No comments:

I went out to Camden in North London with a female friend earlier this month and we enjoyed a barge trip on the Regent's Canal before strolling round the fabulous markets.

It felt so normal and unremarkable to me that it shows how far I have come in less than three years since first stepping out dressed as a woman.

So what's weird in the picture below? The giant bronze horsehead? the Indian chieftain's headdress? the steel and glass canopy added to a Victorian warehouse? It's hardly the woman in jeans that's odd, is it? 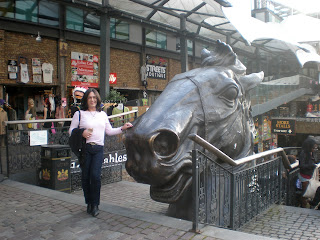 It's so nice to be able to get on with normal stuff without having to feel self-conscious any more.

Sue x
Posted by Sue Richmond at 23:15 No comments:

A year of blogging

So I wrote my first post here exactly a year ago. And, like I said then, I think I took up blogging because it's the thing to do these days. Previously, I had written a lot of my thoughts and adventures on UK Angels but have now shifted more to Facebook and here for that sort of thing.

I suppose I was motivated partly to keep a record of interesting things I was doing, but to make it public in the hope that other trans people might be inspired to go out into the world and try to do something positive and feel comfortable being themselves in public. I know that such tales of outside adventures had a considerable influence on my motivating myself to come outdoors and present myself as female to the world. And it has almost always been a positive and enjoyable way to live since doing so.

This blogging site's mechanics provide all sorts of statistics, many of which are incomprehensible, and some you wonder why on earth anyone would want to know, such as the type of device the site was accessed from (iPad, Android, etc)

But, anyway, as of this moment the stats tell me that there have been 5,828 page views, 60 posts (that's my bit) and I have 21 followers (hello there, lovelies). Most of the viewers are in the UK but a great many in the US and a surprising number from Poland. I wish I knew what "Hi there!" was in Polish. People particularly read about the Nottingham Invasion in March and about my Hell Bunny dress (probably people Googling for Hell Bunny dresses generally and ended up being directed here! - sorry girls, best get back to the shopping sites!). Most people come here from Samanthatgirl, which is Sam's excellent blog. http://samanthatgirl.com/

I've no idea if this is all good, bad or indifferent but competitive statistics is something that men are terrifically interested in and I find tedious and mystifying. So if you've read something here that you liked, browsed some pretty pictures, or have been inspired or interested in any way at all, then I guess this blog has served some purpose apart from amusing me in the evenings.

If you haven't yet visited London this year, you should. The vibe is incredible. Starting with the spectacular New Year fireworks we have seen the unveiling of several buildings, monuments and novelties such as the Shard, the Bomber Command memorial and the Air Line cable car. We have held unique celebrations of the Diamond Jubilee and the most amazing Olympics where many events were free access and the atmosphere was exciting and enthusiastic. London is always vibrant but this year is particularly special. The city is clean, efficiently run and being showcased to the World - enjoy it while it lasts! 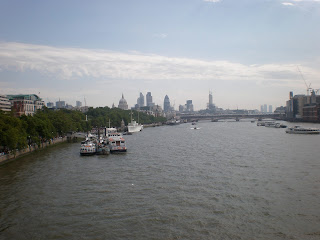 Posted by Sue Richmond at 00:09 No comments: