As an appendix to the last post, I thought I would add an incident that happened whilst out with the Walkeys last summer. I went to powder my nose – as the saying is – in the Chinese restaurant and when I came out of the little powder room a man was at the basin washing his hands. I didn’t think anything of it at first till he came out with “You’re the ugliest bloody woman I’ve ever seen”. “Thank you,” I said in reply to his silver-tongued charm. “Sure you’re a woman? Sure you should be in here?” I looked around and just to confirm to myself that I was in the ladies. His abuse continued so I dried my hands as best I could despite his shoving me and left. Of course, he followed me down the stairs shouting abuse. “Givsa kiss, ya bitch,” he sneered before finally clearing off into the night.

So not only was he not eating in the restaurant, he had evidently just popped in off the street to use the toilets, had selected the ladies not the gents, and decided to make an issue of that.

Not a scenario I’ve heard any other TGirl experience. This man was evidently innately antisocial and abusive (rather than specifically transphobic) and I imagine he would have been happy to abuse anyone given half a chance. I have needed to use ladies’ toilets all over the place – in shops, trains, pubs, restaurants, museums – and have never had a speck of trouble or bad comment at all. I think this was unique and although I was upset at the misfortune of happening to meet this beast at the wrong moment, it hasn’t put me off.

There is one thing guaranteed to get TGirls enraged and that is discussions of the law on the use of toilets. Nobody seems to know the exact answer on whether a venue may bar you from using the ladies (or the gents) at their discretion. The law is likely a grey area but the most intelligent interpretation I have seen from a TGirl with legal background is that matter is essentially one of convention, that there is actually nothing to debar anyone using any loo they choose, but that toilets in private establishments such as clubs may be selective on access, as they are on entry into the venue in the first place. The law on causing a nuisance is clearer, so how you use is more clear-cut than where. Nevertheless, Mr Abusive in my scenario was out of order despite now please washing his hands. Occasionally I have heard of TGirls being abused for just going for a pee, but I can say this is rare. In understand that in many other countries the public loos have no gender distinction and are free for all. Britain still has a rather antiquated view that ladies and gentlemen should be separated and our toilets still carry the quaint labels accordingly, but in some venues this is now relaxing, probably for the better.

Posted by Sue Richmond at 19:16 No comments:

Looking ahead to summer


This is one of these posts where I say to girls: look, if you want to get out in public and be treated nicely as a woman, here are some ideas for places to go, things to see and do and stuff to consume!

I mentioned last year that when the weather got autumnal I’d look back to the sunny summer and describe a few days with my friend Emma Walkey and her wife. But there has been a delay and now it’s appropriate to post this reminiscence from 2013 as we look ahead to another summer.

Normally Emma joins me for a few days in July before we head up to Sparkle but work prevented her from doing that this year. But she and Mrs Emma came to London in August instead and we had a few days visiting the city.

They stayed at the Tower Bridge Hotel, which was where the first TGirl London lunch I ever went to was held back in the snowy winter of 2010. This time we had lunch at St Katharine’s Dock near the bridge. And it was from their room that I saw a sight I have never seen before despite having been resident in this city all my life, and that was Tower Bridge opening. What’s more, it opened twice within an hour! Like London buses, you wait a lifetime and then two come along at once! 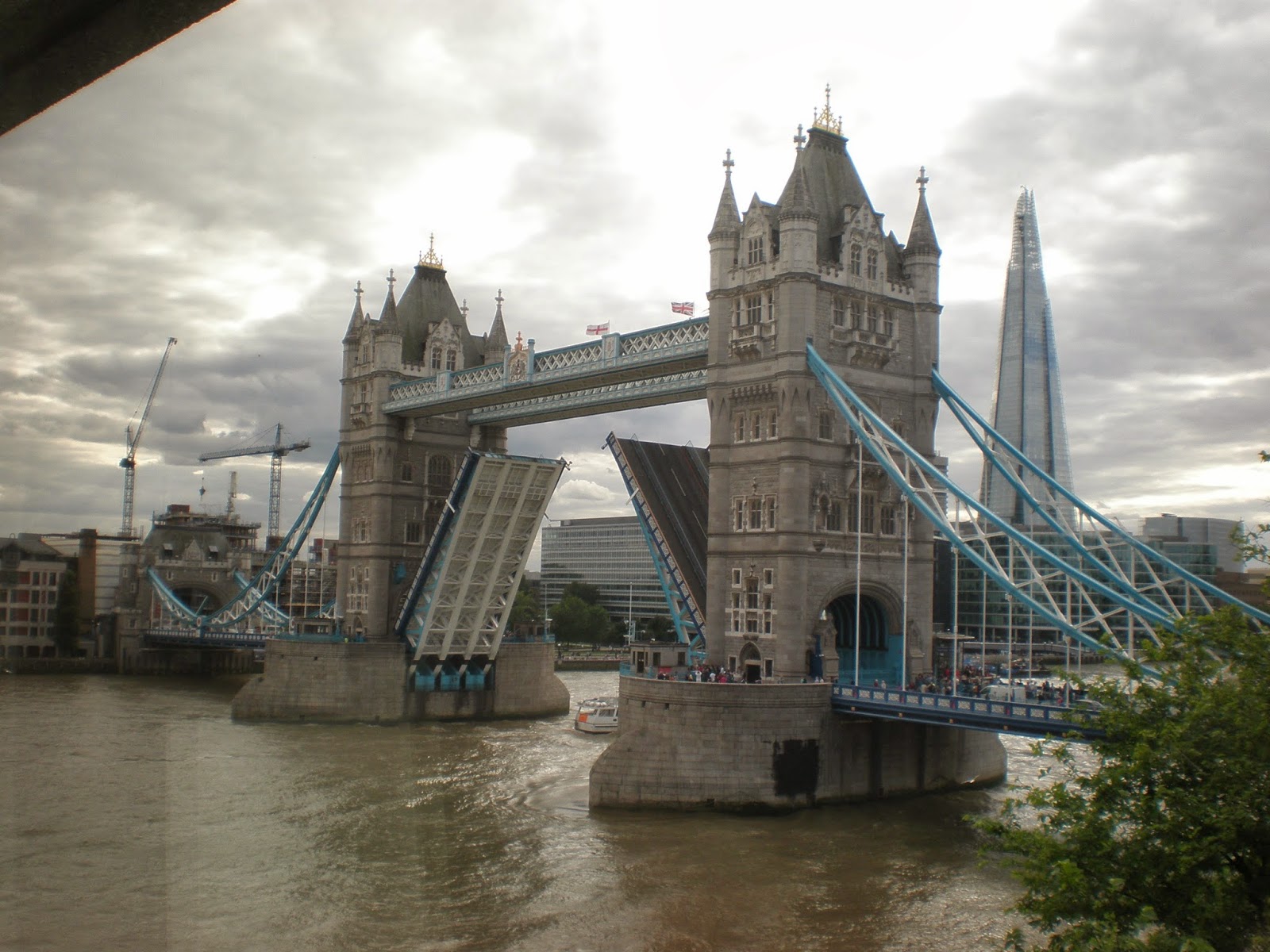 That evening we went to see We Will Rock You, the long-running musical based on the music of Queen. Written by comedian Ben Elton, this show is brilliant – hilarious and exhilarating with remarkable stagecraft. I’ve seen it before but it was good to see it again. It’s been running for 12 years but they will be closing at the end of May 2014 so get your tickets now.

The following day I met them at Embankment tube station and we had morning coffee at the pleasant café in the leafy Embankment Gardens looking over to the statue of the camel, one of the very few animal statues in London. We took the tube to Warwick Avenue (made famous in a hit song by Duffy – what happened to her, incidentally?) 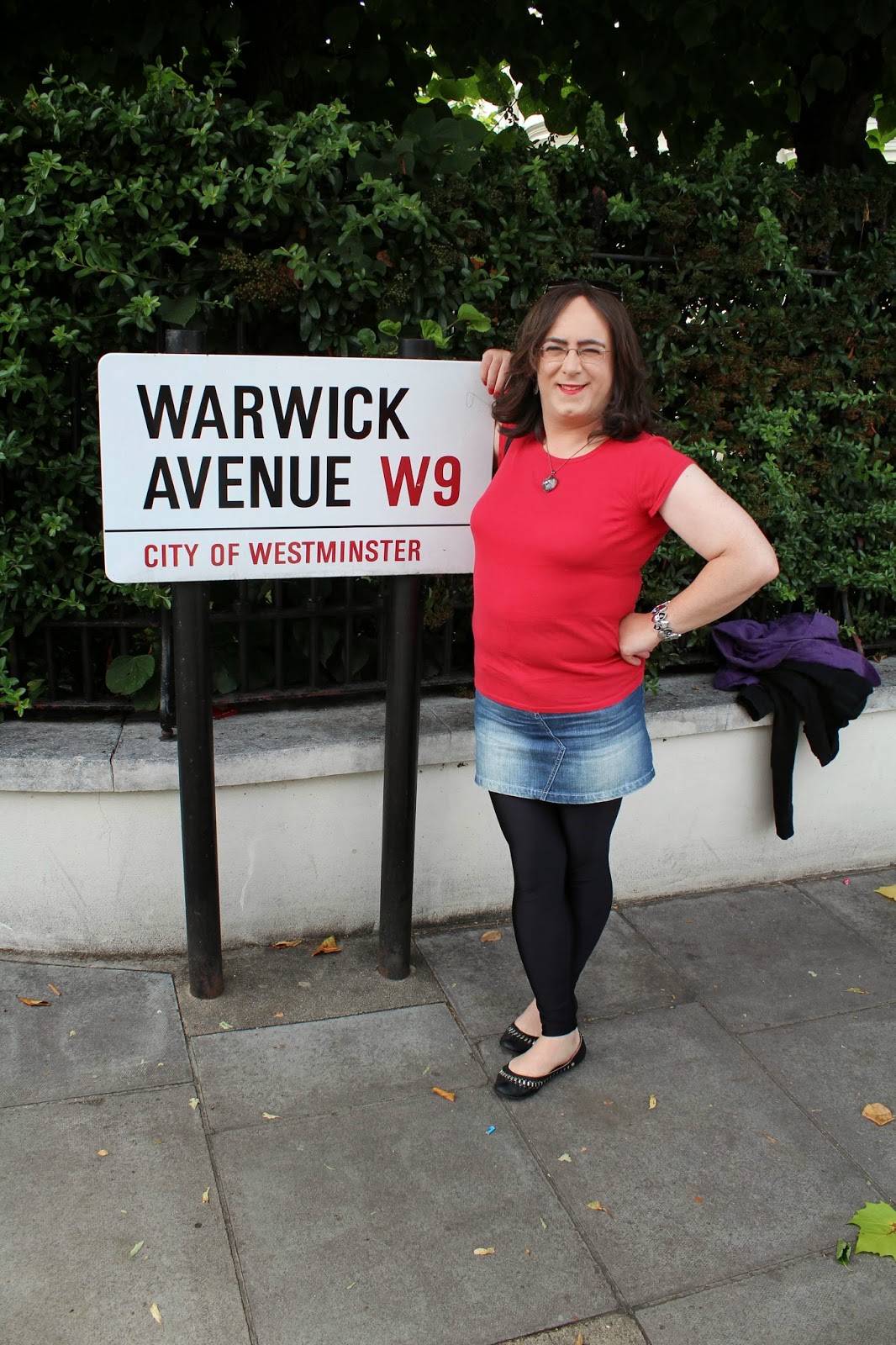 and had a juice at the barge café at Little Venice 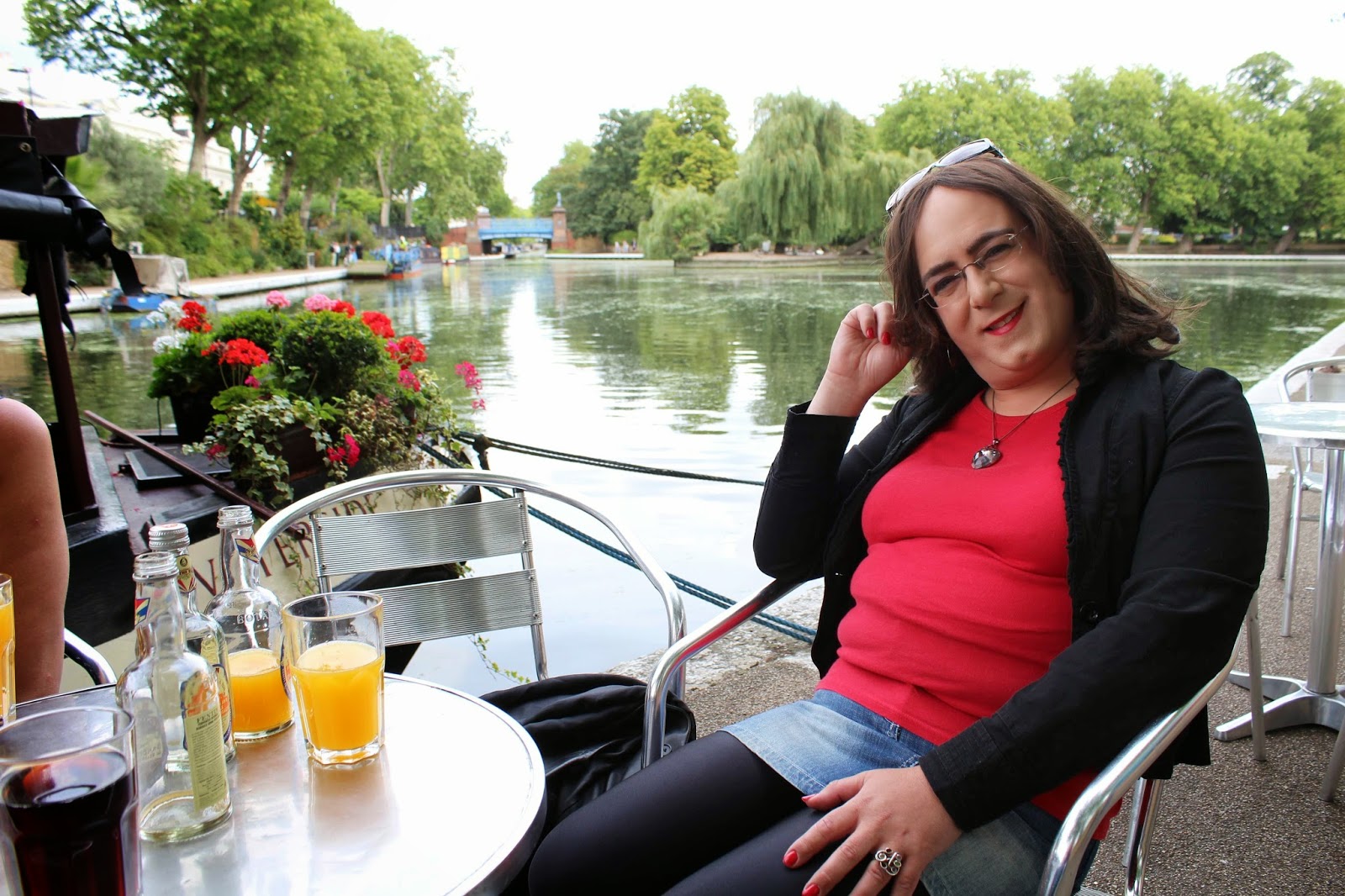 while waiting for the water bus that took us along the Regents Canal to Camden Lock. The Camden markets are a delight and go on for ever. You could easily spend all day there and we pretty much did! Lunch at the Cuban bar there restored us before we plunged into more stalls. 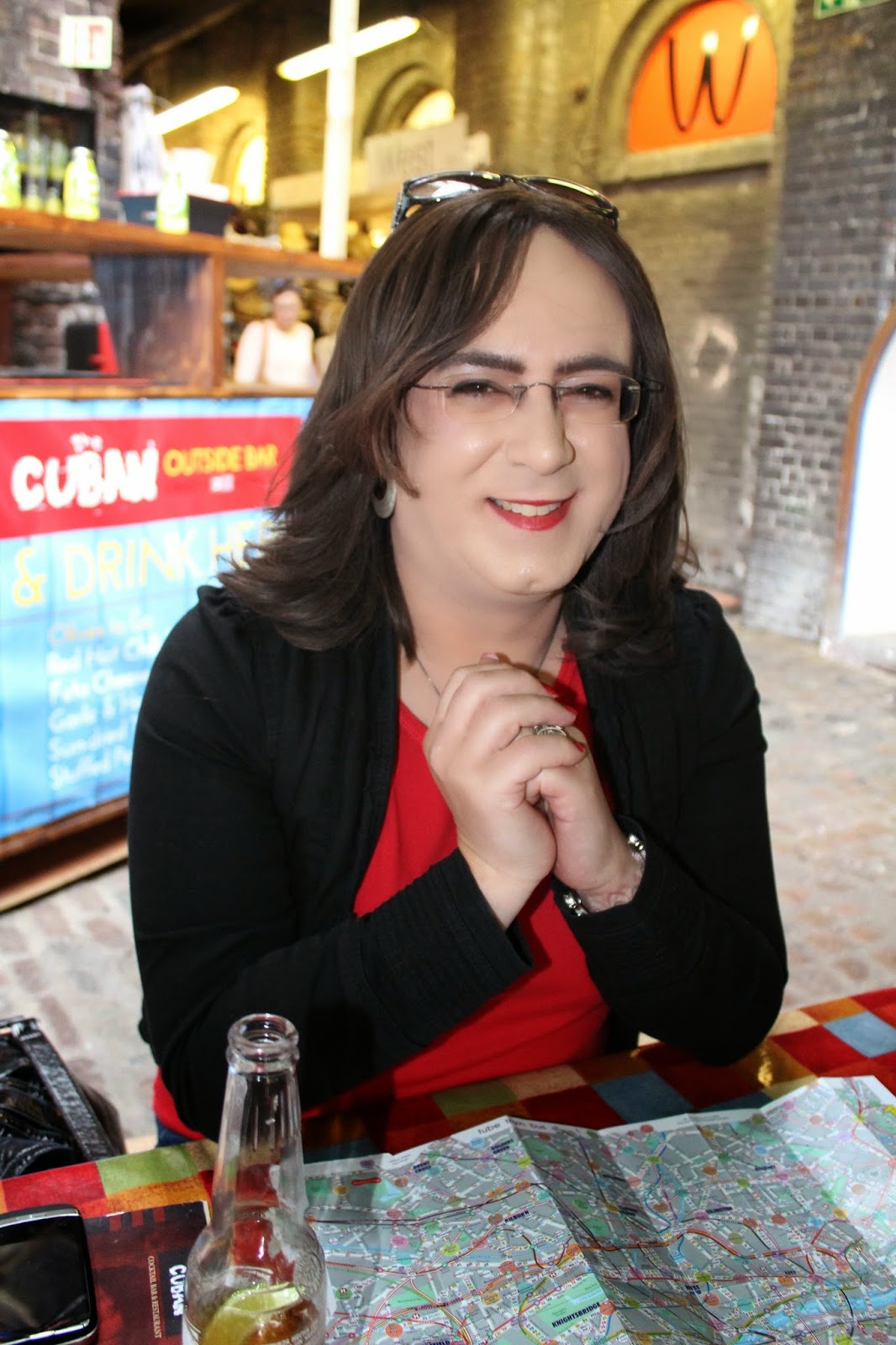 Emma needed reviving after all that browsing so we dropped into the Elephant’s Head pub in Camden High Road which is a decent, popular pub that often has classic rock and roll playing. We were intrigued by the complex takes on classic cocktails. Bloody Mary with Worcester, Tabasco and horseradish sauces? Is this true? Only one way to find out. 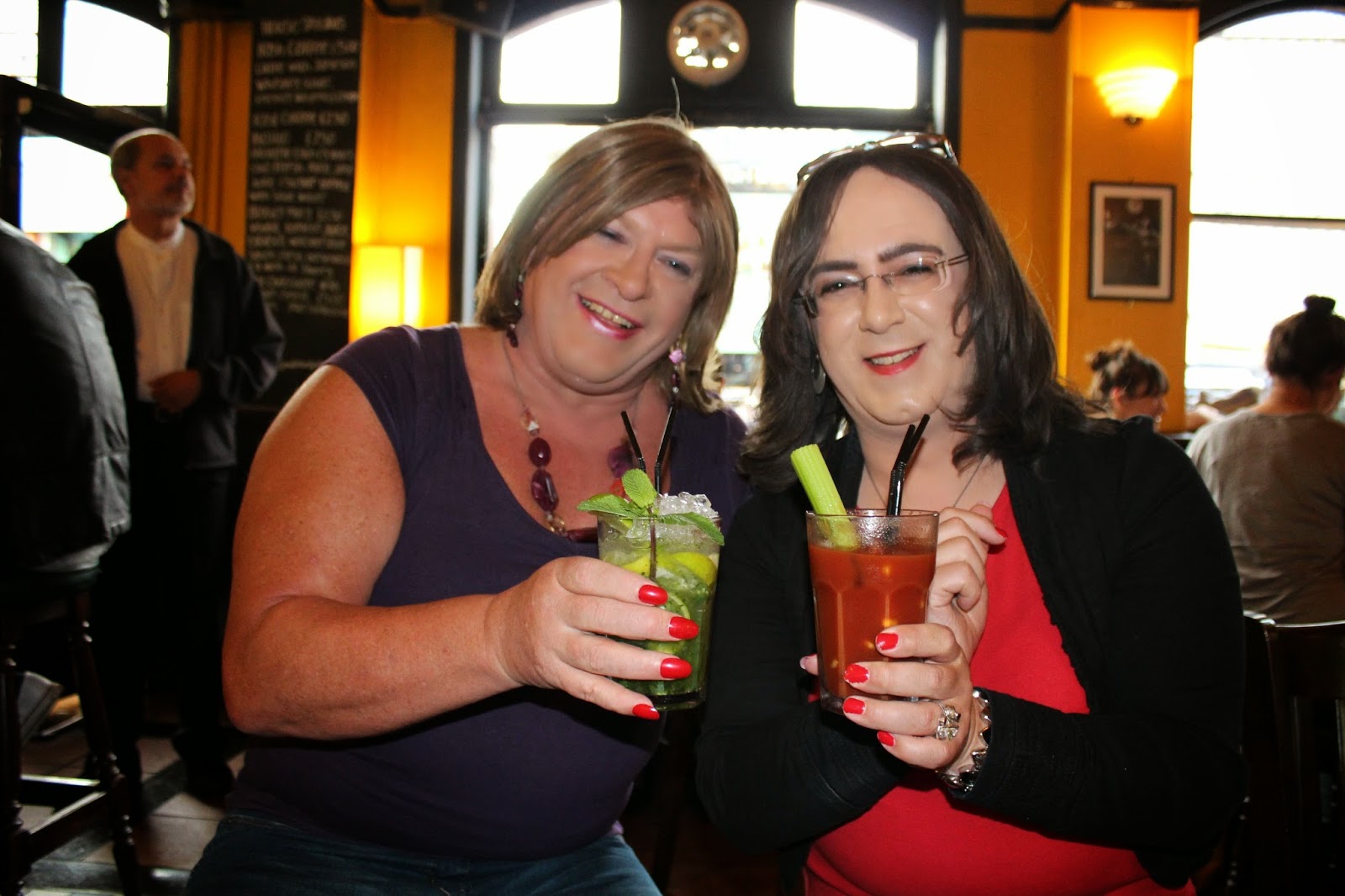 And so we went back to the centre and had dinner in the London Chinatown restaurant precisely in Chinatown. I always find it decent and good value. On the way home I introduced my visitors to De Hems, a Dutch hostelry that still stands within Chinatown when it used to be more of a Dutch and French quarter (indeed the Chinese restaurant still has Hotel de Boulogne written in mosaic on the threshold).

And on their final day I met them in Greenwich. Emma’s been going on at me for some time to go to see the newly restored Cutty Sark but we didn’t go the previous year as the area was getting ready for the Olympics and would have been chaos. A stroll through Greenwich Market, always a pleasure with its unusual craft stalls, and then on to the ship itself which is pretty much as I remember it as a child but with more interactive displays within. Harr harr, me hearties! 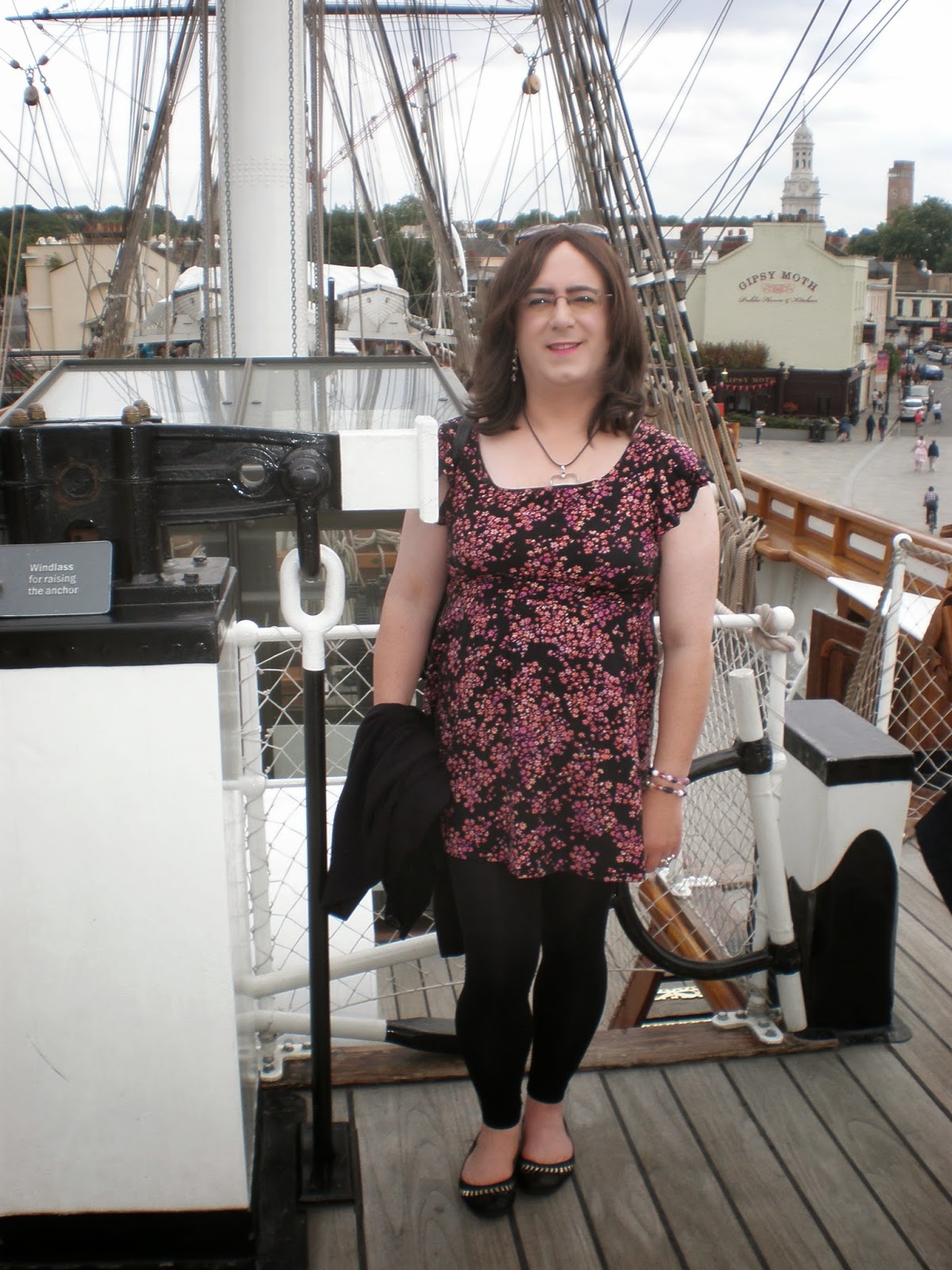 And back to St Katharine’s Dock where we had dinner overlooking the marina with its pleasure cruisers and sailing boats. I’m pretty sure my friends had a lot of fun, and I know I did.

Hello little blog. I disappeared for a bit, sorry. Work was unexpectedly mad and I've just been desperate to catch up with some sleep, so I haven't been online much. A quieter weekend now and then next weekend is easter when I'm hoping a TGirlfriend will be coming to stay. I could do with a proper break.

Must tell you about my fabby new boots and shoes, and about the novel I'm reading from the pen of my pal Roz White. There's also a post from last summer that I have neglected to put up till now. I'm also going to complete a post about the religion of my younger years and how it affected growing up trans. I started that last year but I got distressed about it and abandoned it, but I do think the matter needs airing.