It's been the strangest year for weather. First there was a long winter with unusual amounts of snow. Spring was late but beautiful and led to the longest, dryest summer I have ever known. Apart from the most spectacular lightening storm I have ever witnessed in Britain, which broke in late May, finally, this morning, we have some rain after more than two months without a drop. This is England, I would remind you!

I love hot weather and have a nice tan this year, but it has been oppressive, too, as in London any heat is always sticky. muggy and polluted. I have been trying to clear my loft, a task that has been very hard in the sometimes 35 C (95 F) heat up there - the sun has literally shone on that roof for two months (with breaks only at nighttime). Any exertion up there makes my mascara run!

As mentioned in the last few posts about going out, I can't use the water-based foundation in this heat as it all slides off. The oil-based foundation sticks but causes inflammation for a couple of days so it's not been easy to go to Pride or out to dinner in Chinatown. At home I am wearing only loose tops and floaty skirts - anything else is too hot.

I beat the heat by going to Chester and North Wales for a few days last week. It was greyer and slightly drizzly, which is typical of the area, and for once this was welcome.

Let's see what the rest of the summer is like. I hope it will still be nice, though not so relentlessly boiling.

An evening in Chinatown

It's been a tiring couple of weeks so when Stephanie Monroe asked if I'd like to meet up again, I was happy to accept.

I did need a bit of a break from things and so I left home early in the afternoon and treated myself to a bit of retail therapy. Not only is it nice browsing in the shops but doing so as one ought to be, i.e. female, is the most relaxing and satisfying thing I know. Life seems to have fewer troubles when your transgender nature is allowed to guide your day.

Steph and I met in an old haunt, the Cambridge pub. And whilst chatting about mutual friends who should walk in but two of them, Pippa Bunce and Rachel Bull who have appeared in these pages many times, though not for ages. It was complete coincidence but a nice one.

They had their clubbing agenda and we had our need for food so we continued with our plan for dinner by heading to Chinatown where just about every business is a Chinese restaurant. We picked the New Loon Fung and enjoyed our meal there. 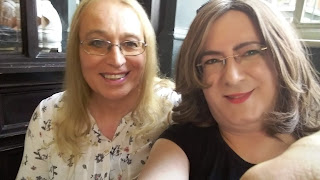 There has been a rare heatwave in London that has gone on for two months and my Mac makeup that doesn't affect my eczema can't be worn very easily because perspiration makes it run so I had to revert to my old oil-based foundation and that has left my face sore even though I use my eczema salve as a base coat and take antihistamine, too. This situation is very distressing. So it helped that it was so nice to catch up with a good friend. Thanks, Steph.

Given that I had to cancel Sparkle, the national transgender celebration, I thought I might at least get to London Pride, and event I always miss as it always clashes with Sparkle.

The day was very hot for England (over 30C / 86F), but there was a breeze blowing. I met my friends Richard and Sarah (my foreign holiday companions) for lunch at our favourite haunt, Melanie Italian restaurant. After which we sauntered through Soho taking in the vibrant atmosphere and watched some of the parade in Regent Street.


The parade was amazing, involved 30,000 participants and took an incredible 5 hours to pass by any given spot. It's impossible to list all the groups, organisations, companies, etc. that paraded past.


We had a refreshing pot of tea in a nice cafe in Kingly Court before heading out into the giant street party again. 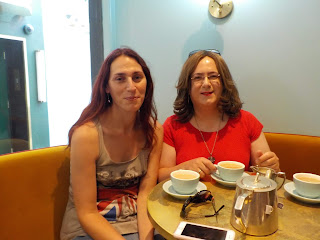 What an amazing atmosphere: fun, positive, supportive and excited. It is the sort of event London does well. I'm glad I went.

Not at Sparkle after all

I've had to cancel my plans to go to Sparkle this year, which is a shame. It's simply because I have a buyer for my home and they want to move quickly so I need all the weekends I can get. It does mean that I save about £500 - yes, it's a very expensive weekend away, what with hotels, trains, meals out and entertainment.

It does mean that I may be able to go to London Pride instead. Something I have never been to because it always clashes with Sparkle weekend.

Click the links to read about my previous Sparkle weekends. There first two, before I had trouble with my skin, are the most fun.

I did go in 2010 and 2011 as well but that was before I started this blog. I hope all the trans people and their families going there this year have fun and feel supported by this community of ours.