My friend Sarah wanted to meet up in London and I have been needing to try out a possible makeup solution that won't damage my delicate skin so badly. So today I put the two together ...

Instead of what I have done for years, which is to use primer, then orange or pink beard cover then several layers of oil-based foundation, powder and concealer, as well as eyeshadow, liner and mascara, all I did was use my immunosuppressant cream as primer and put water-based foundation over with just enough powder to hold it. No eye makeup, just lipstick. It did sting at first and I almost aborted the mission but I persisted. My worry was that any beard shadow would show through the rather more translucent makeup. Throughout the day I kept asking Sarah to check my chin and let me know if I was developing visible shadow but it seems like I didn't.

Anyway, we went for a morning stroll through St James's Park where snowdrops and daffodils were in flower. The lake there always pleasant, even in winter. We ended up outside Buckingham Palace and then walked on into Green Park. 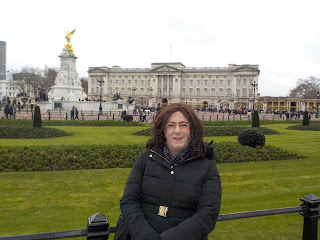 Coffee at the rather nice Cafe Concerto in Piccadilly was followed by a further walk through the bustle of the West End and lunch in Soho. 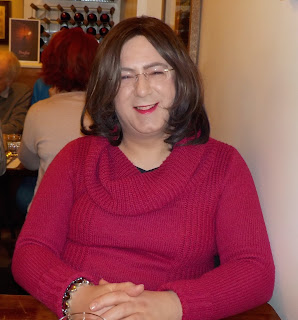 We then walked down to the River Thames and ended the day with a cup of tea at Somerset House as evening fell. 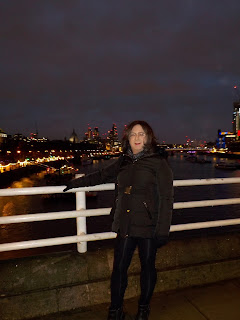 It never fails to be a joy to be a woman, especially just blending in with the crowd and just going about one's weekend like everyone else. And all the waiting staff at all the places we stopped for refreshment unfailingly addressed us as Ladies or Madam. For me, that affirmation is what it is all about.

So I am very happy to have had a day out en femme with a much-loved friend, especially after such a hard week's work. I have to see what ten hours in makeup does to my skin, and that will be the real test. I was a joy to be treated as a woman again.

Ramping up the mojo

I've been needing to try more makeup experiments on my face to see how my skin copes. My infernal eczema is neither cured there, nor even specially quiet. But it's hard to get motivated in the gloom of winter (and the days have been very dark with low clouds for weeks).

However, there are a few things to look forward to so as to get my T spirit back. This weekend I am planning to meet up with the fabulous Sarah whom I've know for years. I am also trying to book a hotel for Sparkle. I really would like to get there this year after last year's aborted plans. And, very excitingly, after years of pestering her, my lovely friend Roz is travelling 600 miles to stay with me this autumn. My Social Organiser Brownie Badge is already being polished up for these occasions.

This wretched illness has not only prevented my putting makeup on but, more significantly, it's wrecked so much of my social life through not being able to participate properly in TGirl meet-ups. Hence much of the collapse in my mojo recently. I really need a break!

When I was little we enjoyed the game of "fortunately/unfortunately" where you take it in turns to make up snippets of a story where good turns of events alternate with bad ones. This is a bit how I feel today after the Policing & Crime Bill (commonly called the Alan Turing Bill) received royal assent.

I welcome today's news that thousands previously convicted of homosexual acts in Britain before such acts were decriminalised in 1967 have been officially pardoned. Too bad most of them are long since dead and this is of no actual benefit to lives and reputations that were ruined. Still, it's another step in the right direction.

There are still sentences that won't be covered by the new law and I do have fears that recent political developments may halt further progress in this area for a while. Given how people are convinced that being trans is connected with being gay (and it's partly our fault for being so closely connected politically with gay rights movements) it's a worry if things move backwards after this.

Still, let's rejoice that society has been reducing the age-old persecution of gay, lesbian and bi people by steps like today's. Slowly but surely.

ADD: 2 Feb. One surviving victim of the war that was waged on homosexuality does not want to apply for a pardon on the grounds that he did nothing wrong, it was the law that was wrong. The age-old paradox that by accepting a pardon you acknowledge the crime. I feel so sad that so many men suffered - and still suffer - in this Greek tragedy of human instinct versus social norm.