I hope you have all had a good summer, or as good as can be when there are so many restrictions on travel and so many people have chosen to stay home. I am living by the seaside in the Mediterranean and I would normally have expected the place to have been packed with holidaymakers these last two or three weeks, but it has been very quiet, even eerily so. This disastrous pandemic has damaged so many lives, obviously from death and illness for those who caught it and the effect on their families, but also for those many who have lost their livelihood as a result of measures to contain it or who have been affected psychologically by isolation and stress. Therefore, I wish everyone a healthy and prosperous autumn in contrast to the worrying spring and summer. Fingers crossed.

Thinking about the 9th anniversary blog post earlier this month, I thought I should introduce some changes. The first is larger font - I don't know about you, but my eyes are not getting younger, and it reflects the larger fonts appearing as standard elsewhere.

I'd like to keep the cerise pink colour of the font - unless I get lots of moans about it.

Given the look-back in the last post, I thought I'd introduce a section in future entries either linking to a past post that didn't quite make the Top Ten, or a dip in my photo archives, or looking at some aspect of trans history. I've been spending a lot of time sorting through my various collections!

So, with that in mind, as an initial treat, here's a look back at all 3.

Here's a post that was typical from my years in London, a day out with food and company, including accompanying a girl on one of her first trips: London Angels Sunday Lunch

Here's a picture of me by the Thames. I'd just had my nails done at a local salon with a friend, Emma, who stayed with me for a few days before Sparkle 2011. 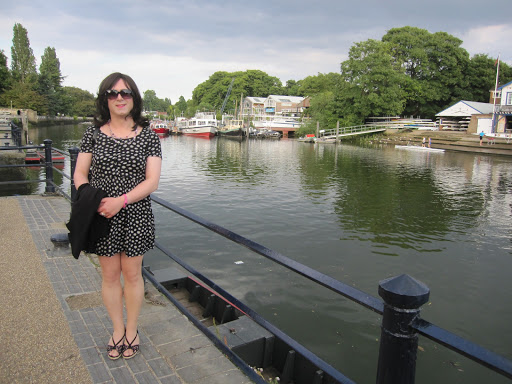 And here's a picture of some glamorous TGirls at a club in the USA in the 1950s when being openly trans was virtually impossible. Fashion seems to have lost some elegance since those days. 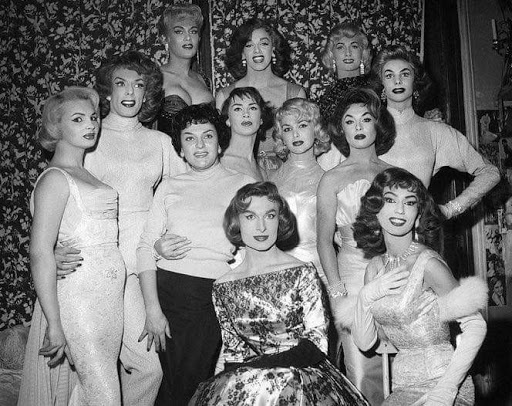 Email ThisBlogThis!Share to TwitterShare to FacebookShare to Pinterest
Labels: Blogging

Every year I do a review of this blog on its anniversary. Here's review no 9.

I first started writing here following a lovely day out at Painshill Park in Southern England with Stella Michaels. The background photo was taken there. It was that day that made me think I should blog my adventures as a memento and as a way of encouraging others to live their trans life more openly.

Blogger has recently revamped itself, which suggests it will be around for a while yet, so this is where I propose to remain. Some features don't work too well and it isn't easy loading photos. To be honest, I never find apps or programs or computery stuff very easy at the best of times but I'll stick to what I've managed to get to grips with here.

Thanks to new followers for joining me, Michelle Hart and Susan Nicole Beach being the latest, and to my longer-term readers.

I won't bore you with all the stats that Blogger provides but just to note that it's now easier to label posts and that should provide a better guide in future than the timeline, so I shall start labelling.

I don't provide a popular posts section as that simply makes the same posts read over and over. As recently confirmed by scientists, success breeds success, so a popular post simply becomes more popular because it's been read before, not necessarily because it's inherently better, whereas I like to think every post has some value. However, I often provide links in these annual roundups so, in reverse order, readers' Top Ten Popular Picks as of mid-August 2020 are:

9 Roz White - transgender writer - a review of successful transgender fiction writer Roz White from Scotland, whose "Sisterhood" series is popular and true-to-life: Roz White, trans writer
NB - the links in this post no longer work (plus Roz and I have now managed to meet several times :-) )  but her work can be bought and reviewed on Amazon: Amazon: Roz White

and the most popular by far

I suspect the fabulous photos of us gorgeous bar staff and the amazing burlesque talent on show are what people enjoy most about that post.

Altogether, then, people seem to like to read about large groups of trans women in high-profile public events. I feel proud to have taken part in so many visible and important events like these - the Nottingham invasion's purpose, for instance, was to make us visible in regular places (not just LGBT clubs).

But in future entries I may provide links to other posts that didn't quite make the cut this time, as they were popular in their day.

Enjoy, thanks for reading and for joining me in my tenth year here. Stay safe and pretty.

Email ThisBlogThis!Share to TwitterShare to FacebookShare to Pinterest
Labels: Blogversary

Things are still not good in the world so I'm keeping things positive here with a variety of items relating to this week that should be fun to read.

Over the past few weeks I've been reminiscing on the period ten years ago when I first got out into the real world as a woman, thus fulfilling my lifelong dreams. Today happens to mark the tenth anniversary of Brighton Pride 2010. By far the largest pride celebration in the UK, the whole town comes out for the fun, whether they're gay or not (let's face it, if you're not alternative in some way in Brighton, you don't really belong!) It also attracts people from far and wide, like myself.

It was my first long-distance trip by train as Sue and was a memorable day: the parade, the funfair, the stalls and stages in the park, the whole atmosphere. Here's a photo of the friends I met up with: Kimberley, Saffy, Angie, me and Lucie, taken by Helena (separate on the right). All still good friends, though sadly it was the last time I saw Lucie (the demigirl from Wiltshire who writes the award-winning Girl Who Should Know Better blog: Girl Who Should Know Better). If you're reading this, Lucie, we need to meet up again when I'm next in the UK after this craziness ends.

In a year with little or no Gay/Trans Pride events, it's been good to look back on this memorable one.

As a lot of fellow trans bloggers have noted, the US postal service has commemorated Bugs Bunny's 80th birthday with a set of stamps including two where Bugs is dressed as a ... I was about to say woman, but Valkyrie and Mermaid don't fit that description. Bugs did so much crossdressing in his cartoons, usually to confuse or falsely seduce his pursuers (mainly Elmer Fudd), that's it's a significant part of his character. The joy of animation is its ability to be very subversive without causing offence, and making any who complain look dumb! ("You're concerned that a fictitious cartoon rabbit wearing a dress will subvert youth? A fictitious cartoon wabbit, I mean rabbit!? Buddy, you need to see a shrink!") But to us he was a bit of an icon for that. For real authenticity, the stamp should wolf whistle when you lick the back! As my last post showed, I have been taking time to look into trans history and imagery. I mean way back, to ancient times, when Hercules lived as a woman for two years and Achilles hid in a girls' school to avoid being sent to Troy! And through all the ages after. I'll put up more pictures and links in due course. Those who say the trans phenomenon is some new fad have no idea what they are talking about.

I'm not travelling at present, and frankly nor is anyone else much, what with this Covid disease around. But I am trying to take decent photos of my surroundings to record the plants, the panorama, the sky. It's rather pretty here in the Med at this time of year. Even a few of me.

So, a selection of items this week with a broad appeal.

I have recently come across articles about the work of two photographers who captured trans life in the 1960s and thought it worth sharing them.
A different age in terms of fashion, where we do see to have lost a sense of stylishness, and in terms of safety, where we seem to have gained (at least in the West).
The first covers the work of photographer Lisetta Carmi (now 95) who documented the lives of the trans community in the port of Genoa, Italy, in the 1960s. As a child she wanted to be a boy, and in 1938 her family were forced into exile by Mussolini's anti-Jewish laws. Ever after, she felt strong affinity for other oppressed groups.
Link: Genoa, Italy, 1960s
The second is about Swedish photographer Christer Strömholm and his portraits of TGirls in Paris in the 1960s, with some lovely images.
Link: Paris, France, 1960s 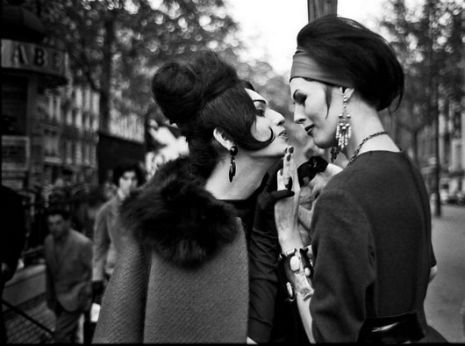