Old boys who were really girls all along

Under the new data protection laws (GDPR), I've asked my old school to stop sending me its literature about reunions, appeals for money and other such stuff. The school was rotten and I don't want these reminders of a bad time any more.

Those who want to know some of the nasty details of life at school can read these two previous posts:

I did wonder if there were any other trans girls at my school. I can't have been the only one, I thought. Ironically, the newsletter I got earlier this month that mentioned GDPR also mentioned an 'old boy' who has transitioned and now lives a full female life. So there's my answer. Of course there must have been another! I just never new if there was anyone with the guts to say so.

There's also a footnote saying how the school is much more alert to LGBT issues and provides suitable help. As it's still a school just for boys, and I am unconvinced about its attempts to reform its culture, I have some doubts that trans girls will really get much help. Maybe I'm too cynical after my experiences there, but I would hope that those struggling with their gender might be able to go to a mixed local school instead. After all, why is splitting the sexes / genders up deemed to improve their education in any case?

I'll be emailing my new-found fellow old girl just to say hi. Who knows, something good might come from the whole experience.

My first time abroad as my true self

I was determined that 2018 would see my first outing in a foreign country and I felt that Berlin, with its relaxed, cosmopolitan way of life, was an ideal place for it. I can't live full-time female for the health reasons I have often mentioned but I am increasingly getting vital female time so some of the trip was for me to be myself.


This year I travelled with my lifelong friend Richard who was a perfect chaperone (and photographer).

Berlin was hot - high 20s / low 30s centigrade (80s fahrenheit) - and this didn't help my makeup regime. My Mac makeup is water-based and can slide off if I perspire. So I had to revert to oil-based makeup which my skin can react against. I did have my medication in case of flare-ups and it was necessary to use it, sadly. Despite that hiccup, I had a wonderful time.

We took a late flight and arrived a Berlin Tegel in the evening. A good little airport with a small but well laid-out terminal, unlike the vastness of London's Heathrow Terminal 5, Britain's biggest building. I like the sculpture outside that is a reminder of Otto Lilienthal, the birdman who attempted unpowered flight in the late nineteenth century and to whom the airport is dedicated (Wikipedia: Otto Lilienthal) 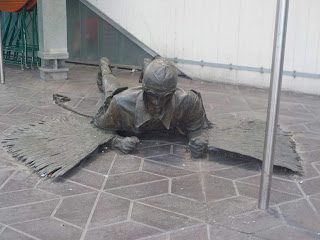 We had dinner at a decent Italian restaurant, Fellini, in in the Schoeneberg district and sat outside in the warm evening. My grilled vegetable starter and tagliatelle pasta main were both very good. (Their website is only in German - well, they are just local. Trattoria Fellini)

The day dawned hot and fine and I knew that my makeup would have to be heavy-duty to survive a hot day of sightseeing.

We travelled to the city centre by S-Bahn, the elevated.


Every city has an iconic monument and Berlin's is the Brandenburg Gate. So photos are compulsory. 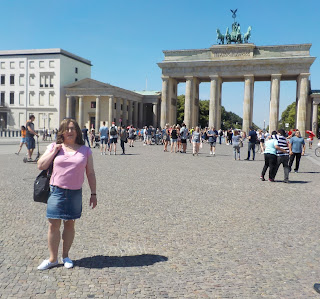 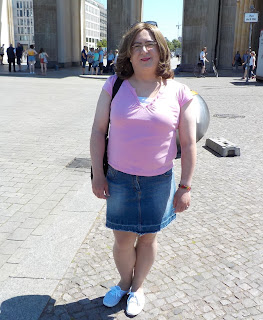 Pariser Platz and Platz des 18 Marz are pedestrianised spaces on either side of the monument that are attractive places to stroll or cycle in. A grimmer reminder of Germany's past, though, is the nearby Holocaust Memorial, which has been placed over the site of Hitler's Bunker. Consisting of hundreds of almost but not quite aligned blocks, it's a curious but effective testament to the wilful confusion and disorientation of people by the Nazi regime. Berlin is honest about its past and, in many ways, that makes its future more hopeful. 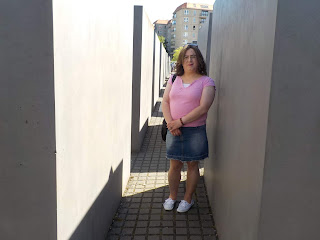 Next we had a stroll down Berlin's elegant main boulevard, Unter den Linden. We enjoyed coffee and cake in a cafe midway down the street. You then get to the finest buildings of Berlin, rebuilt after World War II almost exactly as they were in Frederick the Great's time. Here's a more recent building, the Fernsehturm (TV tower), build in the Soviet era, with a bit of the Berliner Dom on the left, a sort of chapel royal for the Hohenzollern dynasty that ruled these parts until World War I. 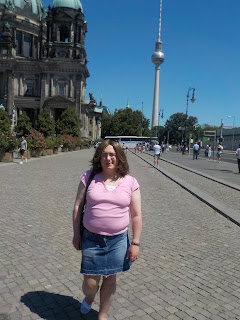 I had a sit-down by the Neptune Fountain in the centre of town. 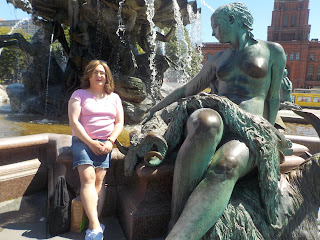 And then we went up the Fernsehturm to enjoy a commanding view of the whole of Berlin. 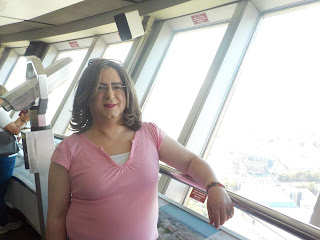 We had lunch at the Momotaro Tavern in Alexanderplatz just underneath the Fernsehturm, a brilliant and cheap new Vietnamese-run Asian fusion restaurant with stir-fry dishes and burgers. The shiitake and chickpea burger was stunning, and just 6 euros! And the iced jasmine tea is really refreshing. Here's their site: Momotaro

These are mainly photos of me, I'll admit, but this was my Big Day and that all-important first: my first time abroad as Sue. Other photos of Berlin are below.

That evening our friends drove us out into Brandenburg, the region that surrounds Berlin, for the annual asparagus festival. It was suggested I did not go as my female self because of the somewhat 'redneck' nature of the place, which is very rural. So despite having to end my Sue day early, we still had a very good meal in Beelitz. The asparagus, grown under cover so it turns fat and ghostly white, is a speciality of the area and makes a good soup and accompaniment.

Saturday was very hot and, in order to give my face a rest, I hadn't planned to go out as Sue. We had been recommended the cafe overlooking the zoo in the new Bikini Mall. Sure enough, you get a view of various apes and especially the baboons whilst you have refreshment, without having to buy a zoo ticket. Berlin Zoo, by the way, is one of the world's best.

We went to a new museum, the Berlin Story Museum, which has a good short history of the city and is housed in an old bunker near the former Anhalter Bahnhof, a mainline station that was destroyed in the war. It was a curious yet appropriate setting.

That evening we went to a very good Greek restaurant in Schoeneberg called Kos and sat out on the pavement. My pork medallions with plums were unusual but delicious.


Day 4: Berlin by boat and on foot

Sunday was a very hot day indeed, so hot that I aborted my attempt to get out in wig and makeup as it would have been very uncomfortable. We felt that taking a boat trip on the River Spree that flows through the centre of town would be a good way to keep cooler. You see all the main buildings along the way.

From 1961 to 1989 Berlin was, of course, divided by the Wall and the river was, at various points, the boundary between East and West Berlin, such as in this next photo. The building below serves as offices for the German Federal Government and its members of Parliament and has been designed in two halves, one on each bank, linked by footbridges, upper and lower, and obvious symbol of the city and the country now being now being unified. 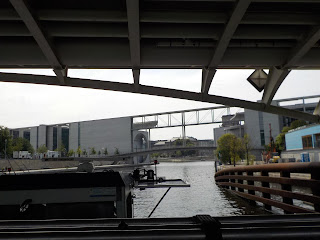 The Reichstag building, with its rather chequered history, has been rebuilt with a glass dome to house a more transparent form of German government: 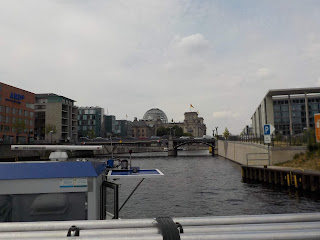 And the Chancellor's Office also has a lot of glass for the same reason: 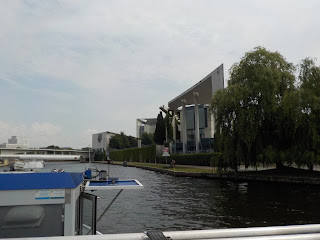 The amount of building that has gone on in Berlin since unification is incredible. As well as all the new government buildings, ministries and embassies needed since the government moved from Bonn, there have been many new hotels, shopping malls and offices, and they are still going up. In the middle here is Berlin's new central station, with new office blocks all around it: 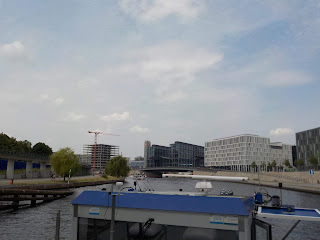 But it's not all modern architecture, as the Berliner Dom, the unofficial cathedral, attests. 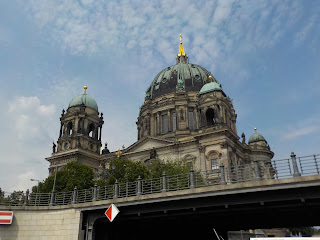 And the Tiergarten is a nice expanse of green in the middle of town, with the Victory Column peeping up above the trees: 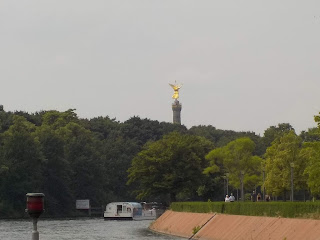 We also walked in the Nikolaiviertel district by the river that was rebuilt by the former East German government to celebrate the city's 750th anniversary in 1987. Old in style, the buildings are largely high-class Plattenbau, the prefabricated concrete construction that characterises so much of the former East Berlin. A lot of facing slabs are slightly wonky. To be fair, they did try to rebuild important things as well as the very limited resources would allow.


That evening we ate dinner at our hosts' flat, which was cooked by a representative of the Thermomix kitchen gadget, a versatile if expensive device. The food turned out pretty well.

Having missed out on being femme at the asparagus restaurant I wasn't going to miss out this time and I was happy to be myself again in the relative cool of the evening.

We had been recommended the Martin Gropius Bau gallery but when we got there the weird art exhibitions didn't really take our fancy so we sat in a cafe in Leipziger Platz to plan our next move. And right there was the new German Spy Museum, which was brilliant. Here's their website:

Naturally my Bond Girl tendencies were fully favoured with exhibits such as the handbag with hidden camera, the lipstick camera and lipstick pistol and the femme fatale camera bra. 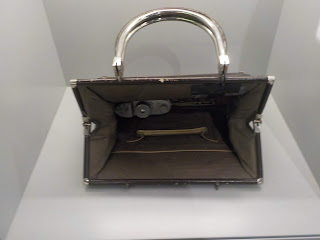 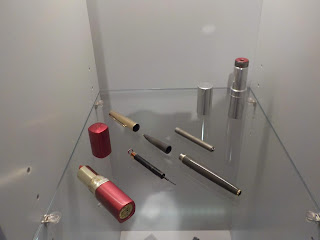 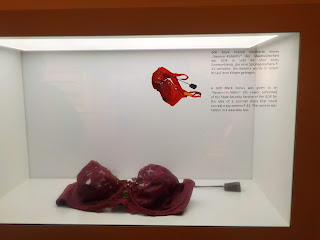 The museum succeeds in being serious and fun at the same time. They have some outstanding exhibits - gadgets such as the above, poisoned umbrellas, spy cars, miniaturised devices, weapons and so forth - but also WW1 trench observation equipment, sections on fictional and film spies, satellites, Enigma and other cipher machines and devices, and some thought-provoking exhibits on how our online activity is all monitored, even if not officially. An excellent museum.

We also had an outstanding lunch at the Qiu Bar of the Mandala hotel near the Sony Centre: QIU bar

Sadly, it was now time to go home.


All in all, it was a very good trip and my first time as a woman abroad. Berlin is a great place to blend in and no-one took the least bit of notice of me, which is just how I like it. Many thanks to my lifelong friend Richard for being good company as ever and to my two German hosts who put me up and met me as Sue for the first time. 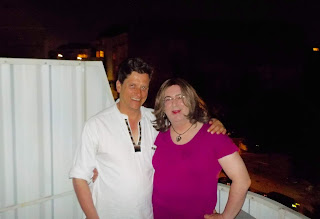 A few last pictures for fun

Hope you too have happy holidays this year.