I’m pleased to say that yesterday I organised one of my long, lazy Sunday lunches for friends in the London area and it was really enjoyable. It was the first I’d done for six months, and the delay was due to the trolling and troubles I’d had in the spring and summer, which rather put me off the T world. I’m glad, therefore, that this went so well, although I just invited friends this time rather than advertised it generally online.

We met at the Cambridge pub right in the heart of London. A hundred years ago, Piccadilly Circus was the “hub of the universe” but things fashionable have shifted half a mile north east to Cambridge Circus where Shaftesbury Avenue and Charing Cross Road meet. Once a bit shabby, apparently the setting for the “Circus” of Le Carré’s character George Smiley (the “octagonal room” is above the bank opposite the pub), it’s now where today’s liveliest West End quarters all meet: Soho, Seven Dials, Chinatown, St Giles.

The Cambridge, which does stand out on the thoroughfare, is a transitional sort of pub, the kind of place you pop into for a quick drink on your way to the theatre or home from work. Only when there’s a major sports event do people tend to linger in the bar, which is not that large. But the dining room upstairs is comfortable and quiet, and the food is good and plentiful. The fact that my pal Joanne is team leader there is beside the point! Well, not really.

So ten of us met up there for lunch at a leisurely pace and caught up with each others’ news: Helena had just been to the Hyper Japan show, and Stella to the Enigma Ball; we reminisced about our TGirl bar exactly a year ago at Olympia. Ann and Stephanie had been enjoying shopping at Westfield. I was seeing Tina for the first time since Sparkle, and Rachel of the Brick Lane Set was making her first (I think) foray into the West End. Just pleasant conversation all round over roast dinner with attentive, cheerful service from the staff. Splitting into two tables makes conversation easier (and dealing with the bill).

Pictures? Oh yes, got to have pictures:


Afterwards, as evening drew on, Irene, Rachel, Tina and me wandered through Seven Dials into Covent Garden to do a bit of pre-Christmas window shopping. These areas are really beautiful before Christmas with lights and worthwhile decorations. We ended the day with a quiet drink at my favourite watering hole, the upstairs Opera Room bar at the Chandos pub just off Trafalgar Square.

I’d just add that going out as a TGirl in London is a totally affirming experience. Not only do you get served like any normal paying customer but staff in places like Accessorise and Kurt Geiger treat you very well. I was delighted also that the railway staff organising rail replacement buses called me “love” when I asked them for help.

Will probably try to do another such lunch in January.

Sue x
Posted by Sue Richmond at 15:55 No comments: 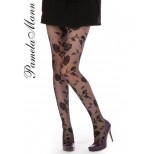 Last week, MyTights.Com sent me their autumn catalogue. For a hosiery enthusiast like me this is a droolfest.

It's reminded me of a day years ago when I had reason to visit a company in Battersea. I was unable to locate the company office in the rambling building so I popped my head round an open door to ask for directions. That open office door happened to belong to My Tights and the girls there in their pretty hosiery and the posters on the walls of flawless legs in gorgeous designs were a joy to behold. For a moment I thought I had stuck my head through the gates of heaven!

One day I'll post about my hosiery collection and maybe even show you my tights cupboard, but for now I just wanted to say how much I've enjoyed buying from this company over many years. They're not necessarily the cheapest option but they are very efficient and their site is well constructed so you can find what you're looking for by brand or style or denier. Their enquiry service (by email or phone) is good and they are very friendly towards transvestites. They even help men buying for their womenfolk (or alleged womenfolk!). There are plenty of other online hosiery stores, but somehow I feel happiest here.

Here's a link to their site.

NB Stop Press! There happens to be a "flash sale" today, Fri 23 Nov, only. 25% off everything till midnight. Type BLACKFRIDAY at the checkout.

I'll be browsing carefully there as I look for my annual Christmas treat for myself.

ADD 24/11 The three items I ordered yesterday at about 4pm arrived this morning at around 9. That's efficiency!
Posted by Sue Richmond at 11:17 No comments:

November 18th is my birthday.

Actually, it’s not officially my birthday, but it’s the day I choose to celebrate my T birth. Not that it marks an anniversary, it’s just the day that it is. Anyway, Queen Elizabeth II has two birthdays and I’m something of an old queen, too, so I don’t see why I shouldn’t do the same.

Unfortunately, things did clash a bit this year with Nottingham Invasion and family stuff so I plan to have a bit of a party next weekend. But on Sunday I met up for lunch with a friend at the very good Rocca di Papa Italian restaurant in the Old Brompton Road. This place is good: excellent food at very good prices. The pizzas are superb. On this occasion I had calamari – whole chopped calamari, not those rubber rings you often get served –, lasagne with lots of meat and delicious, creamy mango sorbet. The staff are nice. Recommended.

This was followed by a trip to Kensington Odeon to see The Master, a film with outstanding reviews that, actually, wasn’t all that great, I felt. Oh well, it made for a relaxing day.

Next Sunday it’ll be a big TGirl lunch at the Cambridge in the West End, which I haven’t done for a while.

Anyway, here’s a picture of Katy Perry’s mermaid dress in the window of Christie’s in the Old Brompton Road (estimated value £2,000-£3,000). I want, especially as I have had no cards or presents so far. And it’s better value than Madonna’s Jean-Paul Gaultier conical bustier at £15,000 also on view there. 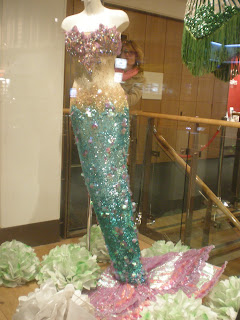 PS  There's now a photo of me and my friends at Nolia's on the "On Public View" post, and links to Verge bar and Carole's Flickr pages have been added to other recent posts.