I've been avoiding posting as the news continues to be dreadful. Just now, three people have been murdered in a church in nearby Nice. That city is still recovering from the deadly storm four weeks ago, and is very affected by the virus right now. Nice suffered a serious terrorist attack in 2016 when a maniac ploughed down over 500 people with a truck, killing 86. Presumably today's attack, like that one, is connected to the 2015 Charlie-Hebdo murders.

But there are two small pieces of good news locally regarding LGBT issues. The Italian parliament has rejected objections to draft legislation designed to combat LGBT discrimination in the workplace and elsewhere, which paves the way for laws to protect us better. Coupled with the pope's (perhaps somewhat unguarded) statement that gay couples' civil marriages should not be cause for discrimination does make things better, at least in this corner of the world. Not before time, as a video by a young nurse in an openly lesbian relationship who has had her car tyres and mirrors destroyed by homophobic neigbours has gone viral. Here's someone on the front line of dealing with the pandemic in one of the worst affected cities, but despite her essential selfless heroic work some people must put hate above all else. Needless to say, support for her has been powerful.

I'd not get overexcited about the pope's thoughts. The Roman Catholic Church remains resolutely anti-LGBT. I wonder if the anti-discrimination message will get through to places like Poland where Catholic prejudice has a lot to do with the current plight of LGBT people there? The pope's appointment of an Afro-American as a cardinal does, however, send another message to that other LGBT and race hater, Donald Trump. So I welcome this slight mellowing of that church's stance.

Let's look back at something cheerful from my week off in July 2012 when I did a makeover for Carol, went sightseeing in London with Emma, and spent a day in the world of burlesque.

Link: 'Twas the week before Sparkle

Second Wave and the Single Girl

I hope you are all remaining healthy in this difficult year. I'm very sad to say that several of my friends are seriously ill, but with cancer or heart problems, not Covid-19. The problem for the very sick this year is that staffing and attention are being taken away from treating regular diseases because of the pandemic. I feel relatively safe in Italy now as badly-run countries, those with less responsible citizens, those with underfunded healthcare, bear the brunt of illness and death. I feel upset for decent people in such places.

This week I managed to obtain a further residence certificate to enable me to remain in Italy after 31 December when Britain's transition period from the EU ends. It has cost me a lot of stress and money to get this certificate - the third one I have needed - and my revulsion at the usurping criminals running the UK who have forced so much loss, change and stress on me has no limits. A few people understand how there is nothing to stop the UK from becoming a dictatorship now, like Belarus or Hungary, but most Brits haven't a clue. Government corruption and thieving is soaring, and in plain view. People seem to have become inoculated against political scandal these last four years. What has always revolted me the most in life is people who lack integrity, and the gang of shysters in London has no integrity at all.

With the US election very close now I can only urge US voters to get rid of the gangster currently in the White House who has damaged so many lives, especially transgender lives, and discredited the USA. You may say it's none of my business since I'm not a US citizen, but in a world where the USA has hegemony, the guy in Washington has an effect on everyone else. A Biden victory in Washington will remove Johnson's main ally and his horrible rhetoric. I will live safer as a result.

So I am just trying to take things as easy as I can in these stressful times. I dress for comfort (here's me in a rare foray into slacks), avoid other distressing and unhappy stuff if I can, and take careful Covid precautions. Being alone for so long away from friends is beginning to affect me, I confess, even though I'm usually quite resilient in isolation. But I keep busy and enjoy my considerable girl time.

Please stay safe in this pandemic, act with integrity and look after yourselves and others.

This week ten years ago I went to Pink Punters nightclub again with a whole bunch of friends, and made a couple of new friends, too. This was the best photo of me from the event and is still one of my all-time favourites. 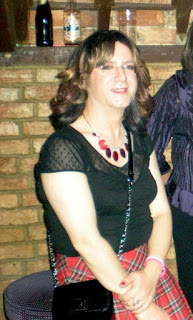 Humanity rises to the challenge

Last Thursday and Friday, Northern Italy and South-East France were hit by Storm Alex. In some areas, half a year's worth of rain fell in just 36 hours and the devastation was terrible. I merely suffered a power cut but up in the mountains along the border many people were swept away by torrential floods that destroyed roads, bridges and railway lines and brought thousands of tons of trees and vegetation down swollen rivers. It must be a terrifying way to die. And I am distressed that the bodies of these poor people, mainly from France, have been carried out to sea and then washed up on the beaches here. The lives lost is a source of great upset, especially as no bodies have as yet been identified, but the towns and villages inundated by mudslides or filled with felled trees are a tragedy, too. Shops and businesses have already suffered greatly this year with forced closures because of Covid, and now this.

As ever, though, hundreds of volunteers from less damaged places have stepped up with wellies and shovels to help the emergency services and locals deal with the mud and detritus. They are called Mud Angels, a term coined in 1966 when Florence was struck by a similar disaster and people from all over the world came in to help. The Africans who live in Ventimiglia, the Italian town on the border, who are looking to emigrate to France, have been particularly prized volunteers. Yes, immigrants, whom so many despise, are as ever at the forefront of humane actions. I dare say President Macron's visit is appreciated and the Prince of Monaco's gift of money, as well as European Recovery Fund money, but it's the ordinary people on the ground who do the work and make no grand statements other than to go and help others in difficulty.

I asked the police on the waterfront in Sanremo if there's anything the public like me can do but they politely declined, waving a hand at the mess of treetrunks and junk on the shore. Unless you have a JCB or a wood chipper there's not a lot you can do, they said.

What a year! This week two friends of mine have lost parents, another friend had a heart attack, another is dying of cancer; someone else I know died of a stroke after two years in care. That's just this week past. And the Covid continues to explode into a second wave. But I keep thinking of the people who took time out to help the victims of last week's storm and that keeps me confident that humanity wins through. 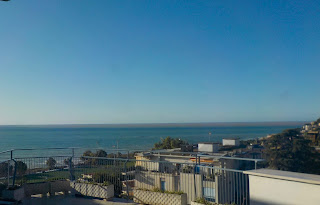 My camera's none of the best (it's for underwater shots!) but the day after the storm you can see the huge brown stain on the sea that is all the mud, trees and mess brought down from the mountains 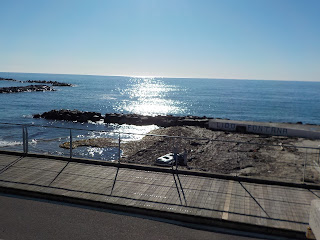 Broken breakwaters, and the endless mess covering what is normally a pretty beach with colourful umbrellas in Sanremo, Italy

This BBC article gives you a full report, photos and film:

And now something jollier from the past. Three years ago I had a fascinating and fun trip to Prague in Central Europe with my friend Sarah, one of my "androgynous holidays" of that year.

Stay safe and well and look after others who may struggling in this difficult year.