My natural hair colour is a very dark brown so not even the closest shave could hide it. But I have realised that my chin hair is no longer brown but turning grey. Although a sign of ageing, it certainly makes life easier when applying makeup. To avoid any flareups of eczema in my sensitive eye area I am not currently wearing eye makeup or mascara. I wear glasses anyway so eye makeup is partly hidden and therefore not worth doing to impress. Instead I have always concentrated on having nice lipstick. This means that my entire makeup routine now takes about 20 minutes, as opposed to nearly an hour in the old days of heavy-duty cover.

And that means that I can much more readily put my face on and go out more spontaneously. New possibilities are opening up. On Sunday, despite the snow, and today, when it was pouring, I put on my face and went out for long local walks. It’s not that I’m attracted to foul weather, but that’s just when I happened to have a spare hour or two. Anyway, I’m waterproof! But the idea was to test and see how my face is tolerating a more regular use of makeup. The answer so far seems to be: pretty well.

Here’s me today in local woodland.

Anyone who is in any way transgender will know the yearning to be properly oneself, to present in the gender that one feels applies and be treated as such. Although I have been very restricted in my feminine life because of this incurable eczema that has affected my face since 2014, I haven’t stopped being trans, haven’t stopped desiring to be female and be treated as a woman. I’ve had to revert to most of my presentation in public being male again, despite all the progress in living as a woman I had made up to when my eczema suddenly came and prevented my wearing makeup.

On Thursday I needed to buy something from a specific shop in Kingston-upon-Thames in South West London, which is a big shopping town. But whilst lugging my purchase back to the station I saw so many delightful things in the boutiques that I knew I had to return as myself, Sue.

So that evening, which is the late night shopping evening there, I went back in my female guise and had a pleasant few hours buying for myself. I enjoyed a naughty slice of chocolate cake in a café and particularly appreciated being addressed as Madam by a handsome young male assistant in John Lewis.

What did I buy? A handbag to match my coat and a belt in H&M, some new knee-length black leather boots in M&S as my beloved old pair are worn out (I appreciated the excellent sale price, too!) and plain opaque tights from John Lewis (I want to try their range). I also got some more Studio Tech foundation from Mac, which is my foundation of choice right now as it isn’t having anything like the severe effect on my skin of the oil-based foundations I used in the past.

It’s so nice just doing everyday things in one’s true gender, like taking the local train, sitting in a café, browsing in shops. When you can live life as your true self, however mundane it is, then you know happiness. I’d been missing that happiness a lot.

January is named after the Roman god Janus, who presided over the start and end of things, over comings and goings, and therefore of contracts, ventures, birth and death, and of transition. He is often depicted with two faces looking in opposite ways. I wonder if trans people in ancient Rome prayed more especially to him.

These last couple of weeks I have been chucking out all sorts of stuff that's no longer needed and has been cluttering the place up. I think there'll be more items of clothing going to the charity shop, too.

A lot of the paperwork I'm throwing out relates to bad times with a former employer, whom I eventually had to sue. It's 15-20 years old and would be time-barred for further legal action, so it's time to get rid of it and hope to leave all that awfulness in the past. This includes the "MJ Papers", named after a deranged female boss of mine against whom I had to bring charges of harassment, including sexual harassment. It's best not to reveal her name here, but the first letter of MJ stands for Mad. What an awful experience that was! And exhausting to deal with. People with personality disorders can cause complete havoc but the main problem with them is that it's a real effort to gather evidence and make a complaint that's robust enough to make headway, as with the criminal charges against teachers at my school that I have written about before.

This week I have witnessed yet more trans-on-trans abuse against a nice person who organises broad-church trans events from various prima donna transsexuals who claim that only surgically altered trans women are entitled to consideration and that all other persons who display gender variance are merely men who play at women just as a kink and their existence is highly damaging to the true transsexual. The accusation is quite common but always delivered very nastily and I believe it stems from Narcissitic Personality Disorder. I've realised that one of the girls I've been hanging out displays much behaviour that is symptomatic of NPD and I've had to block her from my social media and phone (she kept ringing at all times - during work hours, small hours of the morning, etc.) She wouldn't be the first I've had to block. What people!

Of course, there's the usual anti-trans attacks from elsewhere, including one favourite site of mine that's got new management and immediately was slapped by the ombudsman for suddenly requiring contributions from natal females only: "If you were born with a penis," went their charming and friendly notice for 2018, "then you are not a women and should not post here no matter how you feel". They had to retract that, so a small victory there.

On a more positive note, I am feeling more feminine again and my face has shown no major signs of disorder for a long time so I think a few trips out may well be made very soon.

Also positive is the fact that a little nephew of mine who is into online gaming, manga comics and Japanese productions, likes to play female characters (including one who looks like a chubby librarian in skiwear - I can relate to that!) 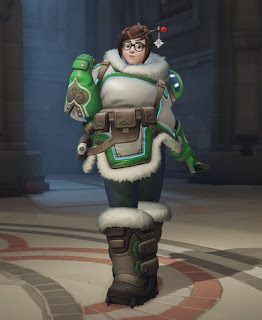 He was very curious to see so many men dressed as female characters at the Hyper Japan show last year (unbeknown to him, some of them are trans, such as my fabulous friend Helena Love who creates some stunning costumes). I am on a recruitment drive so I shall watch this development with interest.