It’s been a very unusual year but I did get time to go out at various times, either just shopping for myself or walking locally, or eating out with girlfriends, such as Sarah, Steph, Gina and Jo, and Emma. 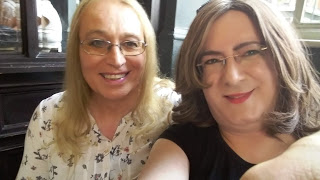 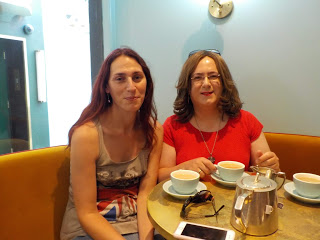 The highlight, though, was my trip to Berlin, which was my first time out abroad. I saw all the sights of the city centre and it was a delight to be free to wander around a place where nobody took any notice of the trans woman. That’s how life should be. 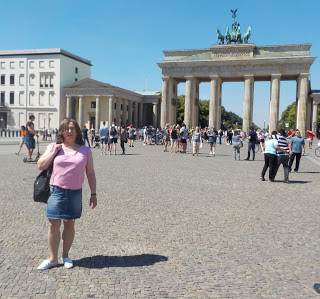 The one major change is that I am moving abroad. Although I’m in Italy at present I may not stay there in the long run. The gross and unpardonable mess that the toxic UK government is making of leaving the European Union makes all things uncertain for millions such as myself. The only thing I am certain of is that a racist, isolated, right-wing Britain is not safe for trans people. Consequently, this year I felt it very important to participate in Transgender Day of Visibility and London Pride. That, and my family’s passionate anti-LGBT bigotry. Spain seems to have a more developed trans culture and that may be my final destination. I’m moving chiefly because my health now needs somewhere warmer and sunnier than Britain.

One thing I can count on is the humanity of lots of my friends in the trans community and when I damaged my leg during house removals, it was a trans friend who took me in and looked after me for two weeks.

I’ve no idea what 2019 will bring. The one thing I am certain of is that it will be very uncertain. I just hope that humanity prevails over the bigotry now seen in Brexit Britain, Trump’s America and other former civilized countries where unscrupulous populist narcissists are whipping up hate. Here in Italy the loons are in government too but their likelihood of failing is high and I think things will soon return to a more rational approach.

Here’s my avatar for 2019, taken whilst on my way to London last summer. 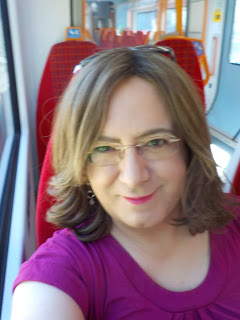 Happy Christmas to all my readers. I hope Santa brought you everything you wanted.

I've spent the last two weeks in Milan, Italy. I treated myself to first class trains there and back, which is a much pleasanter way to travel than flying in a cramped smelly aircraft from grotty airport terminals with aggressive and abusive airport staff to contend with. I broke my journeys in Paris, which I haven't been to for many years. The Alps, clad in winter's first snows, were impressive to ride through.

Just a few images from my trip:

The one bad thing is that I am staying with a family member, they don't know about my trans side and, given my family's bigotry, it is best that they remain ignorant. So no girly clothes. Well, apart from my shoes and socks which are women's because my feet are so small that men's sizes that small don't exist. So I am always connected to my femme life in that way. My stay with family is temporary until I find a more permanent abode.

I am back in England for a few days before I return to Italy for Christmas.