To tell or not to tell?

There are very few friends who now don't know that I am a lifelong transvestite. About four left to tell, in fact. I was coming out to everyone over the last few years, with positive results, until a really abusive betrayal by someone two years ago made me cautious with the rest. (Needless to say, that betraying 'friend' is no longer on my Christmas card list.)

I've known this female friend (let's call her A) for about six years now and she's fun and sweet and we get on really well. She's a London tour guide and seems fascinated by the lives of people with different gender expression, wants to end one of her guided tours in Molly Moggs or some other drag venue, is an avid fan of the stage show Priscilla, Queen of the Desert, which she sees every few months, is going to see the Drag Graduation at London's Royal Vauxhall Tavern LGBT pub this coming Wednesday, and was telling me (my male side, that is) that apparently most transvestites are not gay, often have wives and families, are really nice and friendly and love being women and being treated as women. I nodded, feigning indifference to this information. She has another close friend (call her B) who also seems fascinated by TGirls and often brings the subject up. Trouble is, my long term female friend (C) who introduced these two is not keen on transvestism. C's very far from bigoted (in fact, her best friend is a gay man whom she has supported through difficult times) but she finds it weird that an ostensible male would dress as female.

I am determined to get back on the scene. Let me see what A thinks of the drag show. Then... should I tell? Given that A loves lingerie shopping and asks my (male) opinion on her knickers and lipstick, she'll probably make a great shopping companion and supportive friend. But with several bad experiences of losing friends because of one bitch in each group, I am wary, especially as she and her girlfriends B, C (and D) aka "the Babes" share everything (I am a (male) Honorary Babe, as I've mentioned here before and I am party to their gossip also) .

There's no answer to this. This friend A actually did see me dressed a few years ago at my local station. My heart stopped... but she didn't recognise me at all, and didn't even seem to notice that there was a TGirl three yards from her nose as we got on the same carriage.

I think she might be a good ally... or will she?

Why is this always so hard?

I had a lovely relaxed break in the Canary Islands last week. Lanzarote this time. A lot warmer then home, that's for sure, as only a loon would go out every day here in March with bare arms and legs. (Hmm, I think I probably just implied every transvestite out clubbing in a minidress in March is a loon! - hey, draw your own conclusions!)

Lovely hotel room - possibly the nicest I've ever stayed in - beautiful hotel grounds with palms and shrubs, secluded beach and clean sea, good restaurants, generally peaceful and quiet, and a view of the island of Fuerteventura in the distance. Perfect. Well, I do work very hard so I decided to treat myself. 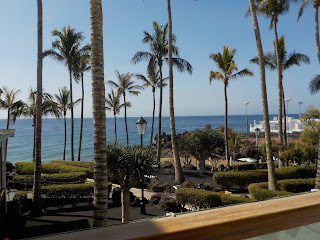 The potions I have been taking for my eczema have made my skin photosensitive and it was weird trying to sunbathe but keep my face covered. (Some might say that's an improvement!) The other problem is that these potions are suppressing my immune system, which might explain the cold I had at New Year, the flu I had in February and the fact that I have another cold now, not things I am usually too badly affected by. The sun may have done a little good to the skin of my face but I will monitor things over the next couple of weeks and then decide what's bet to do with the ongoing situation.

Anyway, here are a few more sunny pictures to brighten up the freezing days we've had here this week.