Yesterday was a girls’ night out in Brick Lane but before arriving there I stopped off at the home of my friend whose surgery went wrong. It was nice to see that she was looking quite a bit better and was more mobile. It was also good to meet her mum. I’m hoping for the best.

On my way there I had to walk through a crowded high street and busy residential area and felt a bit conspicuous in my floaty summer dress amongst the prams and shoppers. A very smart looking guy in a striped shirt, colourful braces and trilby called out: “Nice legs, love! You look great! Have a good one!” and flashed me a nice smile and a thumbs up. Oh, I do enjoy the flattery!

So I met the girls at Verge Bar on the corner of Brick Lane and Bethnal Green Road as usual. It was nice to see Stella again as I haven’t seen her for two years.

People relaxing at that bar are always very happy to chat and take the necessary photos of us. A couple at an outside table were very curious about all us TGirls and asked us a lot about who and why we are who we are and it was nice to talk to them and fill them in.

We went on to have dinner at City Spice up the road. Their chicken goa with mushroom rice is always a favourite of mine. The waiters are always nice to us, too (not to mention the free wine they give us and 25% off the bill which means we get dinner for only about £13 per person).

Pippa, Stephanie and I took a taxi to Leicester Square to visit Ku-Bar. I’d heard a lot about Ruby Tuesdays, which is the big lesbian night out in the basement bar there. Few men are allowed in but TGirls are welcome. Truthfully, though, it was so crowded and heaving that it was hard to enjoy it much, especially when my drink got knocked into my cleavage – nothing that stained, fortunately. We didn’t stay long – I guess that we’re getting a bit old for this sort of thing. But we had a much more relaxing time at Freedom Bar on Wardour Street which is comfortable and wasn’t nearly so full.

I left the others to start my agonising journey home by night bus, which always takes two hours partly because I always just miss the bus and have a full 30 minutes to wait for the next one. For such a huge bustling city with so much going on in the evenings, London’s transport situation becomes very bad after midnight. At least it was a warm night. Again, a nice compliment at the bus stop from a woman waiting there: “You look nice.” Thank you! I could get used to this!

Sue x
Posted by Sue Richmond at 18:04 No comments:

Here’s the post about fun in the sun that I was going to write a week or so ago but got distracted by my friend’s plight. She’s been discharged from hospital after spending nearly a week being dealt with under A&E procedures and is at now home being looked after by the best of all possible nurses, her mum.

The usual vocal members of the T community are currently commenting on international TGirl of the moment, Chelsea (aka Bradley) Manning. I’m cautious on this one as her case reminds me somewhat of that of David Shayler, aka Delores Kane.

Anyway, back to more positive stuff. This summer has been unusual in the British Isles in that it has been HOT and SUNNY! After four bitter, snowy winters and five lousy summers we have at last had a proper summer. So what’s a girl to do but put on a pretty dress and go out and have some fun in the sun.

How about celebrating a friend’s birthday with a picnic on Primrose Hill overlooking London, for instance? 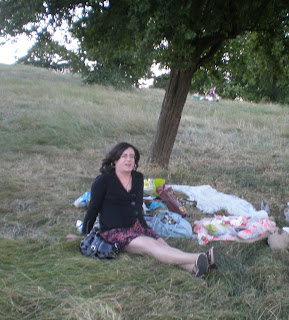 Or meeting up with friends for a spot of lunch at one of London’s oldest hostelries, followed by a drink in the outdoor summer bar at the Royal Festival Hall? 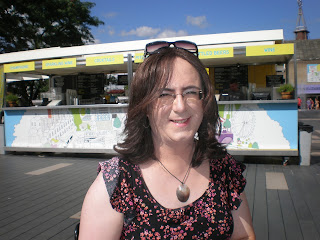 Or organising lunch for eight girls in our favourite venue, Salieri on the Strand, followed by a stroll in the Embankment Gardens and a photoshoot outside the Savoy Hotel?

Or spending three days taking friends round the sights, like the newly restored Cutty Sark in Greenwich? 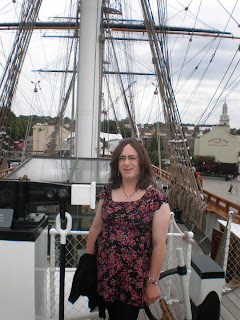 Or just mooching around the shops and enjoying a coffee? Sunday lunch at a pub in Dulwich? Messing about on the river? This city is so full of life and when the sun shines it’s hard to beat. When the sun shines …

Sue x
Posted by Sue Richmond at 23:24 No comments:

The friend I accompanied to hospital three weeks ago is back there. Let me be up front: her gender op did not go well. Those of a squeamish disposition may want to stop reading here.

She spent the requisite week at the hospital after her operation and was sent home. I saw her at home a week after that and she could barely walk, though she insisted that we go out to lunch as she was getting bored of her own four walls. We did have a nice lunch with another friend, and she had a hearty appetite for traditional British Sunday roasts (note the plural!). She was, however, complaining of a discharge that she couldn't seem to wipe away. Two days later, having got in touch with the hospital, she rang to tell me she was frightened, that something like the alien in the sci-fi films was coming out of her. She photographed the problem, sent it to the hospital and they called her back and removed the offending 'alien'. Two days after this she was sent by her doctor to her local hospital because of an infection in her operated area and they sent her back to Charing Cross (CHX).

CHX is one of Britain's top hospitals and she is in good hands. The nurses are very attentive to her and she has friends, family and colleagues visiting her and phoning so she is not alone by any means. However, the infection inside her was terrible with much of her abdomen and thighs swollen. She was operated on this morning to remove infected matter from her abdomen and this evening she seemed much better, but she will have to stay in hospital for another day or two connected to antibiotic and painkiller drips.

This is not good. Whilst she looks good on the outside with no obvious scars, the loss of her inner lining is something that has only ever happened to one patient before, and the consequent infection was very painful, frightening and unsightly. She is surprisingly positive despite all this grief, fear and pain. I am hoping her surgeon, Mr Bellringer, will be able to right this as she deserves a proper outcome for her years of patience.

For my part it has made me think. I feel less squeamish and troubled by medical matters and hospitals than I was (I saw the photo of her 'alien', a strip of rotting flesh some inches wide and a foot long hanging out of her almost to her knees, and saw her disfigured abdomen swollen lopsidedly with infection). That is positive in a perverse way. But this has now put paid to the last remaining notions that I might seek transgender surgical intervention for myself. And boosted my querying about just what transsexualism is really all about.

I am sorry for the directness of this post but I am quite distressed and angry about this. I, personally, have never met anyone whose gender surgery went completely right first time, but this is a bad fail.

UPDATE 21/8/13: I have now visited my friend in hospital three times this week. She is still not well and the emotional strain has told on her, not to mention the exhaustion resulting from the pain and the infection. But she has had many visits and messages from her friends, and her boss has been an absolute angel with his visits, gifts and chauffeuring. Her mum will be coming to look after her from tomorrow. She has no regrets about having had her surgery as she now feels that her body is right and matches how she perceives herself in her mind's eye. It is a tragedy that such a thing should have happened to one who has shown herself so worthy of success in transition.

Although the paragraphs above contain some gory details, they are not the complete picture of this upsetting situation by a long way. It seemed inappropriate to post any more publicly, both for the sake of her privacy and, frankly, because anything more would render the text too lurid. I will be writing to her surgeon, as I feel others close to her will be, to emphasise that we expect her to get the best outcome possible from now on.

Two years in the blogosphere

I started this blog two years ago yesterday. It’s main aim is still to keep a record of things I have been doing, but to make it public so that other trans people feel encouraged to feel that they can be themselves out in the real world.

So, as of yesterday, this blogging site's stats tell me that there have been 16,880 page views (up from 5,828 a year ago), exactly 100 posts (60 a year ago) and my 21 followers of last year have risen to 32 (hello, beautiful people!). Hits are averaging 1100 a month. About half the viewers are in the United Kingdom but a great many hail from the USA and a lot from Germany and Russia. Although, to be fair, compared to the size of their country, the most significant number of readers come from Latvia. The most popular post is “Nottingham Invaded Again” from March 2012, followed by my answers to the questionnaire for “Our Different Journey” (Jan 2013) and “Nottingham Invasion” of Jan 2012. People also like the “Funny Girls photos” (Apr 2012) and “Hell Bunny dress” (Oct 2011). Most people still come here from Samanthatgirl, which is Sam's excellent blog: http://samanthatgirl.blogspot.co.uk/

Last year I thought the stats were a bit mystifying – i.e. I thought them a bit pointless, especially their obsession with what devices the blog is accessed by, but now I find they have a curiosity value.

Anyway, exactly as I said last year, if you've read something here that you liked, browsed some pretty pictures, or have been inspired or interested in any way at all, then I guess this blog has served some purpose apart from amusing me in the evenings.