To all my readers, let me send you best wishes for the time of year. I hope your year ends peacefully and happily, you get some lovely presents and that you also get a decent break from all the rush. 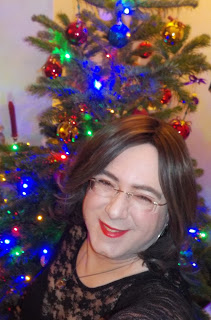 The troubles of a democrat

I am very troubled by what has happened in the United Kingdom politically, especially in the last year. I won't go into full details in this post but will explain in another why this is such a dangerous and frightening situation. A carefully balanced constitutional arrangement in Britain dating from the late seventeenth century has been wrecked and will be demolished shortly. That this collapse in even limited democracy should happen so fast and within my own lifetime shocks me. Not to mention the proposal to remove human rights. This from a country that was instrumental in promoting them, notably after the horrors of World War 2.

I started this blog in 2011 in an effort to show trans people that living authentically as themselves in Britain was not only possible but enjoyable. As a trans person - indeed, just as a person - I don't feel safe in the UK any more, and I won't return.

My efforts to settle elsewhere - currently in Italy - are progressing slowly but surely. I have my permit to stay under European rules, which doubles as a residence certificate. I now have an ID card, too, albeit in my boy name. From January, I can get a health card that enables me to use the national health service and can stop paying for private health insurance (required under European rules). I have put in my application for Italian citizenship, which I am entitled to do under an old law of 1912 that grants it to anyone who had an Italian ancestor. So if you can prove you were descended from Julius Caesar then you can be an Italian citizen, too. (OK, I exaggerate.) That's important to me as I'd rather live in a liberal democracy with human rights and a health service than under a dictatorship or oligarchy. Besides, they've got cool sports cars here and, well, what girl can resist that?

I am spending Christmas with a relative of mine (a Mr Caesar), so no pretty frocks this year. But at least I am enjoying considerably better weather than in previous Christmases in the UK. I'll post again before Christmas Day to send my readers greetings, but right now I remain troubled.