I usually comment on politics only when it affects transgender matters, so that's not often.

I'd just like to record that life as a resident of Planet Earth, and especially life as a trans person, has felt so much pleasanter, calmer, less fretful with someone like Barack Obama in the place of 'most powerful man on Earth'. It's been good to have someone personable, rational, thoughtful, considerate and calm as a politician, let alone as a major leader. Like most people, I am less confident about life with a bullying narcissist like Donald Trump in power, especially in respect of people like me who don't fit the more standard social mould.

Most powerful man on Earth, the phrase is. Depending on time and place that might be the Pharaoh, the Persian or Roman or Chinese Emperor, the Sultan, the Pope... And, yes, almost always a man. Yet few have seemed quite as brazen a misogynist as we now have in the White House.

I shall continue to fight for my worth as a woman. Most of my trans friends are a stroppy lot, and I suspect they will do the same! I'm hoping that my fears are just that, abstract fears and nothing more. But we must be on guard.

Farwell, Mr Obama. I've appreciated your work, even though I don't live in your country.

The joy of shops

I like shopping. I really do. That doesn't mean I have to buy anything, I just like pottering around the shops looking at what they've got. And if it's clothes or shoes, I might try something on. Even after I'd started going out in the big world as female, it was a while before I felt courageous enough to use the fitting rooms, but I quite like trying things on now, especially when it saves me making a bad purchase.

When I last went out, in November (My Resurrection?), I decided to end my day by visiting the shops and headed to Oxford Street where all the main store chains have their biggest outlets. I was really looking for a new coat, but was there any harm in looking at tops and skirts, too? But chiefly it was a joy to rediscover the pleasure of just pottering around among the rails, being treated like any other female shopper and, frankly, nobody paying me any attention as I browsed. I suspect that no-one who isn't trans understands the complete satisfaction of doing normal stuff in one's real gender. It's the banality that's actually the peak of feeling complete.

Debenhams has now been completely refurbished and rearranged. Some bright spark had the idea of installing a piano for customers to play, maybe in the hope of encouraging an undiscovered Liberace to entertain the shoppers for free. Such pianos are popping up all over; the one at St Pancras station is particularly popular and actually gets competent players sitting at it, professional musicians who are waiting for a train. The Debenhams piano, on the other hand, attracts small children. And whilst my trans joy may be unalloyed, I find it hard to appreciate a tuneless ploink! plink! ploink! going on for hours. Best get to the fitting rooms for a bit of peace!

You know, I don't recall ever taking a fitting room selfie before. There are still some firsts. 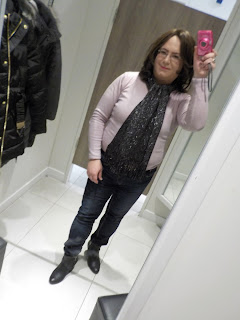 I got a coat in the end. And a boost to my femininity and self-esteem after two years of being out of it.

I hope that 2017 is a really good year for you. Most people I know had a bad time in 2016 in one way or another so let's hope for a much better year this year.

My brief roundup of 2016 is here (a link, as it disappears in the archive at New Year: http://suerichmond.blogspot.co.uk/2016/12/annual-roundup.html )

- to continue losing weight (that's been going well ever since I rejoined Slimming World - more on that another time - although, strangely, I seem to have had a bit of a setback in Christmas week!)

Yes, and it was on January 1st 1997 that I resolved one vital thing. I vowed I would stop purging my female clothes, would accept and embrace the fact that I am transgender and never try to suppress it again and, to prove it, I would dress as a woman every day.

And I have kept that resolution since. Twenty years with no purging or denial. I am trans, that's what I am. And every day has been a testimony to that. Sure, the intensity ebbs and flows, as I've mentioned here from time to time, but fundamentally I know I am trans and have actively lived a trans life since.

I remember moving to my current home a few weeks before that New Year and, despite the enormous amount of decorating work that was going on and the quantities of paint and Polyfilla I was buying, I spent hundreds of pounds getting myself a full new wardrobe of women's clothes, from shoes to bras to nighties to skirts, raiding all of London's shoe shops and department stores to do so. I didn't go out dressed at that time so, frankly, I feel proud of my bravery buying all those feminine things in boy mode.

And in those early years after that resolution, like a lot of TGirls, I'd come home from work, throw off those horrid male work clothes straight away and slip into something altogether more appropriate, and declare "I am a woman". "They think I'm a man," I'd say. "I have to act like a man and appear like a man, but really I'm a woman." Maybe I'd not be quite so bold as to make such a black and white statement today, but it was a liberation from the oppression I felt before.

In my last post I mentioned that Carrie Fisher as Princess Leia in 1977 had a profound effect on me and I took steps to embrace my femme side. That was a rocky journey for those next twenty years because of so many family and other cultural pressures, hence the many purges and resolutions to stamp out my trans leanings. But these last twenty years have been amazing in my female development and I hope that they are a precursor to two more decades of embracing my femininity.


Here, by the way, is my new avatar for 2017 (which I will get onto Blogger when I can remember how). I always change my profile pics every New Year, usually picking my favourite from the previous year. 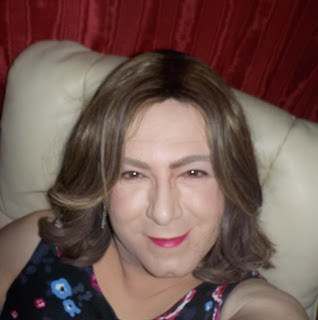 Best wishes to you all.

Each year I do a summary of my past year en femme.

Let me be honest, the first half of the year only saw me experimenting with medicines and makeup to see if I could go out femme again. The second half of the year, for reasons not chiefly connected with my femme life, was unspeakable. It is a testament to the love and care that women tend to express more than men that saw many of my TGirlfriends help me out in ways both practical and emotional. My thanks to them all.

So, well, there isn't a huge amount to say apart, frankly, from being glad to see the back of 2016.

I have seen something of my TGirlfriends this year. But mainly I had to be in boy mode when I did so. This makes me unhappy and there's a limit of about three on the numbers of dressed or transitioned girls I can see at any one time before I feel really gloomy that I can't participate fully. The one trip I made out en femme, on 5th November, was lovely, though. The rest of the time I have dressed fully I was at home. There are some good photos but I am still hobbled (if that's the right word) by the eczema on my face that reacts badly to makeup (or anything that goes on it).

The highlight of my year, though, was visiting my fabulous TGirlfriend Roz White and her welcoming family who live in the Orkney Islands. Roz is shortly to go full time and her family have been supportive and so has her workplace. This is wonderful news. I did have a lovely weekend there and saw the most amazing things. Here's my favourite picture, of an ancient stone circle, the Ring of Brodgar, one of many testifying to the civilization that existed there 4000-5000 years ago. 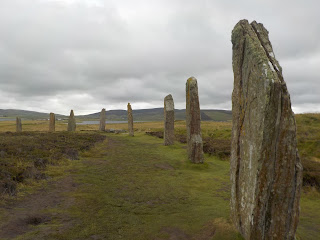 It's been a year when so many celebrity deaths seem to have occurred and, for TGirls, David Bowie and Pete Burns are perhaps the obvious ones. But for me, the death of Carrie Fisher just a few days ago has been most poignant as it was this first sight of Princess Leia in the opening sequence of Star Wars that actually had a direct influence on my femme development. Here was a woman whose small stature, and very similar hair and eyes to mine, hid a feminine yet strong personality. Despite the world Princess Leia inhabited being fictitious, there was something that made me appreciate that I could make my way in the real world as a woman if I adopted that kind of attitude, and I started dressing in earnest and playing with dolls after she came on the scene. RIP Carrie.


Thank you to all my readers who have stuck with me in this barren year. Here's hoping for a very much better 2017.