I took ten days away from work this month and went to Italy, hence the length of time between posts.

Not only did I need the break but I also felt the need for some culture and some amazing food...

I stayed with a very old friend who is currently working in the Pisa area. He doesn't know about Sue, one of the few left who doesn't, so my femme side didn't make an appearance. Never mind. I also met a colleague in Florence (it wasn't all holiday) and she took me to a great place for lunch with no tourists.

The local wine is terrific (yes, I was off my skin medication until the last day so I could enjoy some fabulous vino, not just the famous Chianti but also Bolgheri, Montepulciano, Vernaccia...

And the food... and the restaurants. I've never had pork with bitter orange before; spaghetti with fresh tuna sauce cascading like a wave from a scallop shell; duck and orange ravioli; lots of wild boar stew, platters of beautiful hams and salamis; battered rabbit; fresh sea bream in a restaurant perched on the cliffs above the sea. Fabulous. And ice cream... oh, yes.

Here's a few illustrated features from my travels... interesting, I hope, and some amusing...


VOLTERRA: ancient Volterrae, one of the 12 great Etruscan cities before the Romans came, perched on the crest of a steep hill with a remarkable museum of Etruscan civilization. Quite by chance, we happened to be there during a gathering of classic Italian racing cars in the town square.


Florence has the most awe-inspiring spot on this planet that I know of: the Medici Tombs tucked away behind the church of San Lorenzo. I have been here several times and some years ago, for 30 seconds, I was alone - no tourists, no custodians - just me and Michelangelo's statuary that is so lifelike and alive it almost creeped me out. Lorenzo de' Medici sits pensive whilst, on the sarcophagus itself, Dusk gets ready to slumber and Dawn is waking. Giuliano de' Medici, Day and Night are on the opposite wall. The whole chapel is an extraordinary conception by an extraordinary man, and I am always in awe here: 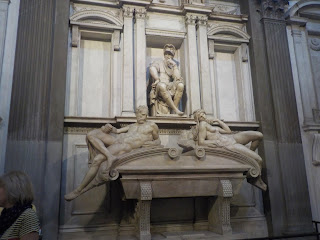 LEGHORN (LIVORNO): Not a great tourist magnet (especially after being wrecked in World War II) but I was curious about the English engineers and architects who designed much of it in the late 16th and early 17th centuries, notably Sir Robert Dudley, and Inigo Jones whose portico for the cathedral (which part largely survived the bombing) is like his portico for St Paul's Church in Covent Garden, London. I was also curious to see the markets which were once thriving centres for selling WWII army surplus and black market goods - the sort of haunt of Milo Minderbinder from Catch 22.


LIGURIAN SEA: I haven't seen this sea since I was a little kid on family holidays. It's rather fabulous in the evening light...


SAN GIMIGNANO: another postcard city, Medieval and unspoilt, perched on a hill with numerous tall towers.


Well, that's just a taste of some of my holiday snaps. I won't bore you with more, but just to say that this part of the world is incredible... for its natural beauty, its extraordinary culture, its world-beating artistry and its beautiful fresh food. I also got a tan. And put on half a stone in weight. Oops!

On 21st April the Queen celebrated her 90th birthday. That's a milestone worth celebrating in anyone's life, but it's all the more remarkable for such a public figure.

Two days later it was both St George's Day and also the 400th anniversary of Shakespeare's death. Although I used to be bored by the Bard at school, I decided to join a London tour guide to see the festivities around the rebuilt Globe Theatre. There were 37 screens showing excerpts from his 37 plays. Apart from one screen that didn't work. The play? The Comedy of Errors, of course!


I mention these recent national anniversaries as they show the importance of celebrating important things. For my little part, today marks two anniversaries. One, the departure from one career that I had grown to hate. The new outlook I gained from that event enabled me to find my feminine life in a very real way. The second is the anniversary of my setting up my little business. It was a gamble, of course, but I put the effort in to make it work. And last week I had far more clients call to request my services than I could possibly provide and now I feel vindicated that changing careers and working for myself was the best move I ever made. Not least because I now work en femme whenever I like.

My little celebration today included an evening in full makeup. Phase Two of my Eczema Recovery Programme. More details of that in a forthcoming post. 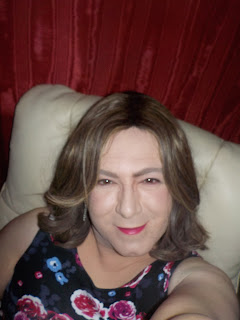