Well, this is the blog of a male to female transgender person and she has barely been seen this year because of illness. So it’s hard to do a trans roundup of the year 2015. Apart from Sparkle, much of my time has been a return to male mode or a sort of andro mix. For 2016, I am determined to get back to where I was when I started this blog and I have been following my new medical regime religiously in the hope of being able to do so.

Sparkle is Britain’s national transgender celebration and takes place every July in Manchester. Thousands attend and it’s become the highlight of my year.

I guess it’s what you make it. In Sackville Gardens there are stalls, a stage with musical and comedy acts and other entertainment, various official events in the Gay Village such as meals and parties, and there are more serious things such as lectures, advice from surgeons and such like. Personally, I find it the best opportunity for catching up with friends. Two of my friends, Bobby and KD, have already blogged about their Sparkle this year:

I had a major work project on and didn’t arrive till very late on Friday night. The journey up was eventful – we were diverted and arrived nearly an hour late because of “armed men on the line”. Now, I’ve heard some railway excuses in my time – wrong kind of snow, swans on the line, and even a mysterious “bridge bash” (either a collision with a bridge, a long card tournament, or a wild party, we weren’t told) – but never this one. We passengers had visions of a posse of bandits tying a curvaceous blonde to the track and cackling as the “whoo-whoo” of the prairie flyer is heard from round the bend. “Hayelp, hayelp!” she hollers, like Penelope Pitstop, till the Anthill Mob or, better, some dashing hero with pencil moustache rescues her and carries her off into the sunset on his steed. Such are my girlish daydreams. Anyway, after all that excitement, I went straight to bed.

In the morning I had a major task to do. It was exactly a year since I had experienced the disaster caused by my lousy skin and I had not shaved since in order to let my face recover. So now it was time to remove my impressive beard and look less like Robinson Crusoe and more like … well, Sue Richmond. It was weird to see the familiar face emerge, encouraging to see that my eczema was much improved, and joyous to see the familiar me emerge as I applied my makeup. It wasn’t perfect as I’d forgotten one or two things, but frankly I didn’t care and I took a photo of the returned me wearing a pretty pair of mushroom earrings that a friend had given me.

Out and about again

I was unsure how I would cope with being out again after a whole year when I had to relearn how to be a guy in public. I needn’t have worried as within moments all the familiar landmarks made it seem like I’d never been away.

Almost immediately on getting to Canal Street I bumped into familiar friends which is what I like best about this event. In fact, over the weekend, I met Zazoo and her friend David, who distracts all the boys with the stunning tattoos that Zazoo creates on him, Emma Walkey, Kay Denise (KD) and Mrs KD, Bobby and Mrs Sox, Gina Burton, Sarah, Kate Collins and Mrs Kate, Kara Rowe and her fiancée Louise, Tania Thomas of Nottingham Invasion, Maddy Watson, Jemma Stevens and Jo D whom I hadn’t seen for years, Stefania, Amanda Mc and Sarah whom I first met last year; Lisa Goodridge, Rebecca May and Priya Rai all from the TGirl Bar; Helen Louise and Helen Turner, both beautiful ladies from the Brick Lane Set; Joan Tabb, Debbie Roberts, Alexandra and Elen. I had made plans to meet Andrea Fortune and Elle Drescher for the first time and sure enough we managed to. It was a nice surprise to meet Vanessa Hardwick for the first time, a well as Josie Hughes who runs the Adam & Eve dressing service in London (Jody Lynn of the Boudoir was also in evidence with her Boudettes). I got to know Anna Faith, Pippa Stockings and other girls whose names I have probably forgotten or inadvertently overlooked. So it’s a busy social event! I was sad to miss Jolene Young, Rachel Kim and Susan Matthews who were there. Sadly, Wilhelmina from Hungary and Erin from Norway weren’t able to make it this year.

As has become traditional, I had lunch at Villaggio’s. In past years I used to organise lunch there but this year, being unsure of my health, I had planned nothing in particular. But Bobby and Mrs Sox joined me and we had a nice catch-up.

In the afternoon I went to the park to browse the stalls and I bought a couple of wigs for party time, when that returns, and got various freebies. It’s always the best place to bump into people.

That evening I had dinner at Velvet, organised by the Queen of the Scene, Ms Kate Collins and her wonderful wife Suki.

The chocolate selva at Velvet is to die for. 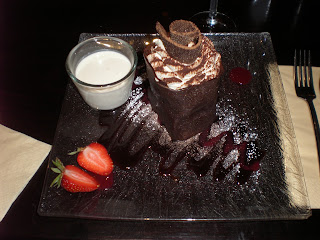 Inevitably, as always seems to happen, we ended up in the Molly House, which is probably my favourite venue there, and, equally inevitably, Napoleons.

The Sunday was a day I had to make a decision: attempt to cover my unhappy skin with makeup again, or end the experiment and go home. I decided to risk it and Sunday was, again, a mix of bumping into people, watching the stage acts and enjoying the venues in Canal Street. I ended the evening with old friends Zazoo and Emma in Delicatezze (formerly Eden) for dinner and the Molly House. I was glad that I’d ventured out to Sparkle again this year.

Sadly, the weekend made my eczema flare up quite badly and it was clear that I was unlikely that I would be able to go out any more without full recovery from it.

I’ve had a few trips away this year and one or two other outdoor activities. I have tried to be somewhat androgynous outside, which isn’t hard as so few of my clothes are from menswear shops these days. In fact, I cannot remember my male sizes any more, which has left me making the same kind of wrong purchases as I used to make twenty years ago when I was first buying women's clothes on a large scale.

As well as walking some of the Capital Ring here in London, I’ve visited the East Midlands on separate trips and took a deliciously relaxing holiday in the Canary Islands. And, yes, I did wear my bikini.

I’ve still been seeing my London girlfriends even though I can’t dress. We’ve met up in favourite locations: drinks at Verge in Brick Lane, lunch at Sarastro’s in Drury Lane, exhibitions in Somerset House, summer picnic on Primrose Hill, and I’ve enjoyed a couple of trips to the Science Museum to see and hear early Cosmonauts with Sarah who actually works in the space industry.

My health seems to be improving so I look forward to returning to a proper state of feminine existence in 2016.

Thanks for reading and I hope that 2016 is a wonderful year for you.

Wishing all my readers around the world a very happy Christmas. I hope you are able to spend a nice time with family and friends.

Just a quick update on the last post which was about my visit to the consultant dermatologist.

I have now been able to ditch the antihistamines and the steroid cream and have been on the new cream for a week. My whole face and neck look much better, although I can tell by the feel that the problem is not yet gone. I need to be on this cream for a minimum of 6 weeks, although I will make it longer as it is so important that I get better. Who knows, I may be back to my old self by March.

The best thing is that I am back to shaving. At the moment it's only every other day, but that represents a lot of progress. And that has meant my girly mojo is returning, too.

New hope for this faceache

A few days ago I finally got to see a consultant dermatologist. As you know, for 18 months now I have had a bout of eczema on my face so severe that anything that touches my skin causes it to flare up in ugly ways, and that includes soaps, shampoos, makeup, even sometimes the medicines to treat it! Last time this happened in this way was in my 20s and, after lots of failed medical interventions, I was eventually advised to stop anything from touching my face altogether, which meant no shaving either. That worked as a remedy and took two years. This time I have tried the same and it was beginning to work. After a year, as an experiment, I took the resultant beard off for Sparkle 2015 as I wanted to see if my face could take occasional makeup. The answer was no, and I suffered quite a setback.

So now I am on a new regime of medication and soap substitutes for the next few weeks or months with some new patch tests early in 2016 to see if anything particular is causing it. I’ll obviously take my makeup foundation along for the tests (though I doubt it’ll cause a reaction as I used it without previous problems for years). The beard is off now but I will not be presenting as female until this is all completely cleared plus several weeks grace before I try normal soap again and then some makeup. For the first time ever, unlike all the doctors and specialists before who essentially shrugged their shoulders and told me to put up with it, this youngish doctor understood my plight and actually said: “This time we’re going to get you better,” which is the most positive thing I’ve heard in a lifetime of battling this problem. The downside is that I shouldn’t drink alcohol during this period. And in the run-up to Christmas this is hard!

So I still won’t be presenting as female for a while yet as my makeup is essential to me, but I do feel more positive about recovery. And when people say to me, “Sue, you could so easily go fulltime female”, or “Sue, you should have laser or electro,” this is one of the main reasons why I can’t. So often whether you can transition has got nothing to do with how you yourself feel or what might be best for you, but what reality throws at you.