This time last year I was on top of the world (see here http://suerichmond.blogspot.co.uk/2011/12/summing-up-2011.html). Indeed, 2010 and 2011, as I emerged as a debutante TGirl into the world, were probably the happiest and most amazing years of my life. This year, by contrast, has been very mixed.

On the plus side, most of my close long-term friends now know that I am trans and have been hugely supportive. That’s been a real source of comfort, relief and happiness and means I can just be myself. I’ve had no problems at all out in public. Indeed, everywhere I go people are welcoming and treat me as a normal human being. (And why not? I treat others with respect, so they return it. Human nature is predominantly decent.) The recent art show demonstrated how I can be officially recognised.

I’ve got to know two new groups of girls, the Nottingham Invaders and the Brick Lane Set. I knew the Invasion bossladies, Maddy and Samantha, and several other girls in the area already, but they’ve created a superb monthly night out in Nottingham city centre. I think it works better than other places because there is no ghetto, just ordinary venues (yes, a couple of gay pubs, but mainly everyday clubs). London’s Brick Lane girls at the Verge Bar are also good company, and are obviously somewhat closer to home.


There have been the thoroughly enjoyable rounds of eating out, shopping, theatre, cinema, travelling and having a great time with friends. And even just everyday stuff. Somehow, life is nicer as a woman. I absolutely love stage shows of all kinds and there have been some delights this year.


I’ve been helping girls dress and do their make up in my home, which has been a bit of a learning experience. Sadly, I've had to give up on a couple of friends, but in compensation I have made a large number of new friends and continued to enjoy the company of older ones. My friends are my joy and I love them to bits. There's always room for many more.

I’ve also been pleased that people seem to enjoy this blog. Thanks for reading. I try to keep it entertaining and humorous, and with illustrations rather than just prose. I’ve been enjoying other people’s blogs, too. (I’ll see if in my technological rubbishness I can get my favourite blogs list on the front page rather than you having to click on my profile to see them.)

The other thing to comment on is what an incredibly exciting place London has been this year, largely because of the Jubilee and the Olympics and many new constructions, from the Shard to the cable car. It’s a phenomenal city and its spirit lifts me.


Now the bad bit. A black cloud has been created by the malice of a number of self-appointed ‘activists’ who sprayed their hate everywhere mid-year. It seems any person who fancies it can set themselves up as a know-all trans leader and dictate the terms under which other trans people shall live, with violence to reinforce the message. I once used to provide workplace bullying advice in a national trade union but I have never seen abuse, control freakery and bullying like this. The hatred exuded by some trans people is in contrast to the acceptance and kindness of just about all the non-trans people I’ve met. This malice has been a source of anguish to me this year. It’s made me wish that I hadn’t bothered coming out, and made me fear the future. I didn’t go to the London Pride or Brighton Pride events this year because I felt ashamed of being in any way associated with this brutality, and I have stopped organising lunches under the Angels name as I feel in danger. I am still giving thought on how to deal with this as my resources and experience have actually failed me on this one, but I am just glad that the majority of trans people are decent and I’m grateful to my many friends for their love and support over this. I do feel it will be a while before I feel properly happy and at ease again. In any case, clearly I will have to take a new direction in future. I’m sad to put this so strongly, but some things cannot be pussyfooted around.

Anyway, back to the positives. I hope you have a fun new year’s eve, whatever you’re doing. Proper New Year’s greetings tomorrow, and a new up-to-date avatar (exciting, eh?).

Happy Christmas to all 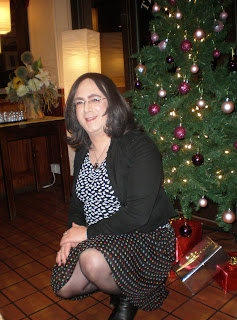 Posted by Sue Richmond at 20:30 No comments:

I've been in bed all week with the lurgy. I think I'm lucky in that I rarely get so sick that I have to take to my bed, but I can't recall being this ill for a great many years. (OK, so I'm not in bed at this precise moment as I type, but you know what I mean.) I'm hoping it'll be all gone by Christmas Day.

This is very annoying because it's not only messed up my work for the week but it's also messed up my Xmas shopping and other preparations. But above all, I'm very disappointed at missing the Nottingham Invasion tonight which promised to be a good one, especially as friends I haven't seen in a while are going. Boo!

It wouldn't have mattered if the world had come to an end today (as promised by the Mayans). What a disappointment! Nothing exciting ever happens round here!

Hoping that normal service will be resumed before long.

My first public appearance as a nervous debutante was almost three years ago, at Pink Punters. I hadn’t revisited this well-known LGBT club on the edge of Milton Keynes for almost two years so I thought that a nostalgic return was appropriate now that I have achieved so much as a TGirl. Besides, many of my friends were going to be there, which was the main reason for going.

I decided, partly for convenience and partly, I think, from an increasing feeling of relaxation over my trans status, to travel to and from Milton Keynes in male mode. For the last couple of years I have travelled to trans events in female mode. There are reasons for this switch, which I might bore you with in a different post.

I started with lunch and a quick trip round Milton Keynes’ vast shopping centre with Tiff and Mrs Tiff, who kindly picked me up from the station. I restocked on ballet flats as my others have been all worn out now on the unforgiving pavements of London.

Then to the Campanile hotel opposite the club where I showered, shaved, did my makeup and nails and hair, and dressed, all in a leisurely two hours (compared to the same taking over four hours on my first trip there).

Because of the trouble and expense of dining away from the hotel we dared to eat dinner there. The food used to be fairly poor but it has improved and my dinner was good enough, though the few staff were hard-pressed in the crowded bar/dining room to maintain quick service. Anyway, it was nice to chat to old friends Ange, Tiff and Mrs Tiff, Maddy, Bobby and Mrs Bobby over dinner and meet new people such as Gina, whose recent rapid foray into the world is impressive, and Emma H and Mrs Emma, who know where to get some fabulous rings. I also caught up with Leila (who travelled with me and Emma W to this year’s Sparkle). All these girls have the most fabulous dresses imaginable, and wear them beautifully. I’m going to have to up my game considerably if I want to remain on the scene!

I changed outfit for the club. It too is having a change of look, but is still essentially the same, with its outside bar/seating/smoking area, quieter top bar, main dancefloor in the middle and killer dance area in the basement. Apparently there are new changing rooms and toilets, but I didn't see those (I have camel genes and don't use the loo). £8 entry, and drinks not too overpriced for a club. So many locals attend Pink Punters even though it’s billed as an LGBT club, which shows it must be a good venue. For me, it’s a place to meet up with other TGirls and view the latest in tranny chic. Very short tight dresses and stockings are unlikely to go out of fashion here, hence my choosing a short lace dress and suspender tights.

Being the Girls’ Big Night Out it was packed with TGirls, more than I have seen before there. It was good to meet Josie there, back from abroad, and meet her wife for the first time, and also Maddy’s friend Zoe Marie. I’m glad I stuck to drinking water throughout as they have installed a variety of heaters and the outside fire is bigger than ever, with the result that it was actually pretty hot there and my wig now smells of coal smoke.

So, in all, another enjoyable evening catching up with friends and admiring frocks and discussing big issues such as the merits of tights over stockings.

I now really, really want to get to the Nottingham Invasion this month. Will time and money conspire against it? Watch this space, I guess.

The crazy time of year

Christmas madness is upon us. December is the busiest time of year work-wise (for me), and it's also the time when you have to shop a lot, send cards, prepare for the 25th and go to loads of parties and lunches. I'm not work shy and I love a good meal with friends, but it does get wearing when about a third of the year's activities have all to be crammed into the three weeks before Christmas Day. I'm exhausted already and feeling very fat!

And hence the neglect of the blog for a bit.

However, forthcoming highlights include a night out at Pink Punters at the end of this week and, of course, lots of girly shopping (I always buy myself a Christmas gift of some posh tights and some jewellery.)

The lovely Lynn Jones has challenged me to complete a questionnaire about trans life, which is nearly done and which I will put here as soon as I can.

In the meantime, my little project to photograph the best of London's winter lights is under way. Here's a taster: the Old Vic theatre looking lovely, with its Christmas tree. 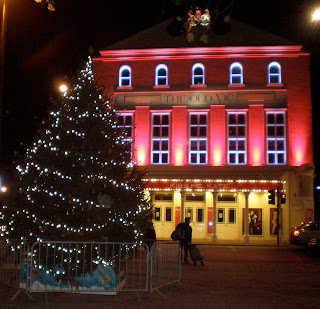