I haven't been online much this month or used social media because the news has been getting me down. Please try to keep safe and well during this pandemic and, much as none of us enjoy face masks, distancing, hand washing and other hygiene practices, basic safety - let alone courtesy and consideration - should encourage us to look after each other as well as ourselves.

I have decided to remain here on the riviera for the foreseeable future. It's beautiful, lively and the weather is ideal for someone like myself who can't stand cold and grey. It's the combination of natural blues and greens, with lively flowers thrown in, that makes it so pretty. 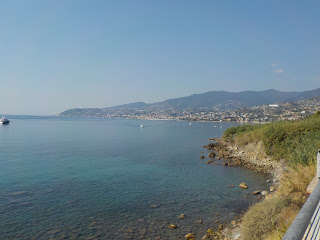 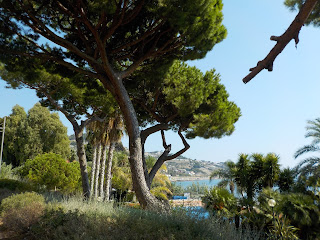 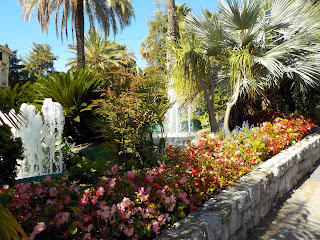 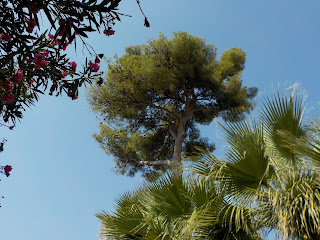 By contrast, I found this photo from my days in London. One of the many lively evenings with girlfriends. Let's hope the days of distancing and facemasks will be over soon and we can get back to squashing up for photos like this again.

If there's one thing that defines me it's that I am the Priestess of Pantyhose of the Temple of Tights. I maintain about 300 pairs of tights/pantyhose and some stockings/holdups, for all occasions.

I love hosiery because it smoothes my legs from any pimples (or oversights) resulting from epilation, waxing or shaving, or any blemishes or uneven tones; because hosiery looks and feels good, elegant, classy, fun or sexy; and hosiery also keeps me warm ... I have a serious problem with my body temperature, which is largely why I have moved to this part of the Mediterranean riviera since the cool, cloudy, damp English climate I lived in before was making me chronically ill.

Yet, because the temperature here for the last 3 months has been 30C daily (that's about 85F) I have not wanted to wear anything close-fitting that would increase my body heat. That's a first for me since not one single photo of me ever taken does not show me wearing tights/pantyhose. Even if it's a gossamer-thin 5 denier pair of sheer naturals, the hosiery is always on my legs. Even if I am wearing jeans or slacks, I have hosiery underneath. And in winter I'm not ashamed to go for 70 up to even 200 denier opaques.

Now I have a lovely tan, a tribute to daily sunshine and regular swimming, so those summer "suntan" or "oiled look" pantyhose are simply not needed. It's actually a very odd feeling, having my skirts brushing bare legs for the first time ever.

How low can you go?

And you thought I had bare legs! Not a bit of it! 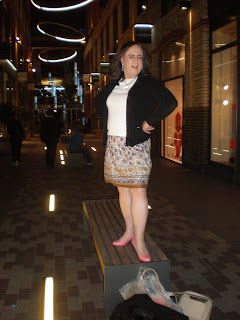 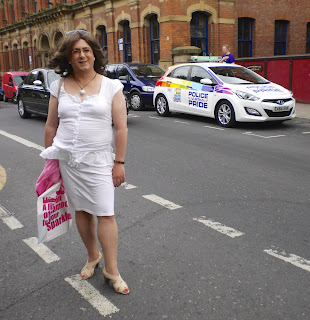 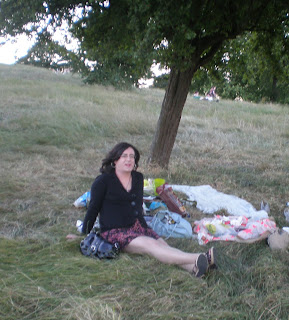 I haven't posted for three weeks because of intense distress. To maintain my residence in the Mediterranean I had to travel 200 miles by public transport with strict Covid restrictions to put in an application under the UK Withdrawal Agreement with the EU. I have, at least, much more confidence in Italy's approach to the Covid crisis compared to other first-world countries, notably Britain and the USA where both governments' approach falls within the UN definition of genocide. There is a dangerous level of anger now against Britain from British citizens abroad whose human rights are being stamped on by their own supposed government. This from a country that was once the bulwark of civilization, that harboured anyone from persecution, that stood up to fascism, oppression and tyranny.

I'm so glad to see that Dee Williams has just popped up among my blog followers. One of my earliest trans friends, I've missed her since she moved to Cornwall. Hoping to catch up with you properly soon, Dee.


A dip in the archives

I said I'd post historic photos in my future blog entries. Here's a photo of me on this very weekend in September, ten years ago. This was taken in Whitehall, where Britain's main government ministries are located and where I had just been on the one and only protest march of my life. The Pope was on a state visit to Britain, you see, and although the Pope is of little direct interest to me, he is in many ways the most obvious representative of religion as a whole. The religion I was brought up in was brutal, oppressive, cruel, abusive, threatening and inhumane and drove me to attempt suicide. I found it cathartic to march as a woman in 2010 and stand against what for me represented religious transphobia, including that of my family who hate LGBT people with a blind fanaticism. 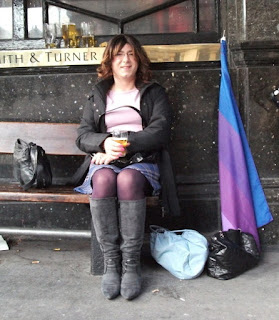