I haven't posted for a while as I've been waiting on the people who claim to want to buy my house to get on with doing so. The English system of house buying and selling is soul-destroying. It's a lot easier in other countries.

The other thing that is destroying my soul is the deranged and toxic yet incompetent government that we have in Britain now. I rarely make political points here but for over 300 years the UK constitution worked well, despite being unwritten, and it is now failing. Governments of all colours are usually a background annoyance or irritant that citizens mainly just grumble about. This one is different. We are facing a dictatorship, the first since the 17th Century, with removal of human rights and other freedoms. The prospects for minority groups is frightening. Immigrants and even their descendants will obviously face the worst of it - European citizens even if they have lived and contributed for decades, Jamaicans who came in the 1940s, people of non-local colour and religion. And in the wake of that you can be sure of the persecution of others, the LGBTQI Etc community being almost invariably targeted in these instances. Although the current prime minister seems to be trans friendly at present I fail to see that lasting especially if, as has been the intention for 2 years, Britain leaves the European Union with its protections for citizens' rights. There are other government intentions, such as leaving the UN's Council of Europe so that there will be no answering to international scrutiny on human rights abuses, and so we can send a few more 'undesirables' to Trump's America for torture. This in a country that was instrumental in bringing down the dictators of the past and establishing modern notions of rights across the world.

When the Germans invaded Holland in 1940, they found it easy to round up Dutch Jewish citizens. The Dutch, you see, kept excellent records of their citizens and the Nazis simply went through town hall filing systems to find the persons they wanted.

The National Health Service (NHS) here deals with trans people in one way only. Although slightly more relaxed recently, basically you have to transition, preferably surgically, to receive assistance, hormonal, psychological or other. That's basically it.

As mentioned a few times, I don't feel surgical transition is suitable for me and therefore I feel let down by the health system that I pay into that isn't really interested in assisting me in any other way. I have had to discuss my being transgender with doctors over the years, especially when I was being treated for eczema since I had to explain that that illness prevented my wearing makeup and that was destroying my wellbeing as a trans person. They took that very seriously and I am grateful for their attitude. I have been seeing a doctor again recently for something else and although she was well-informed about transgender issues and happy to refer me to the gender clinic, I had to complain that NHS assistance available here is limited and actually unhelpful to many trans people.

I have always asked, though, that my medical record not be marked with any transgender indicators. Why? Well, if I cannot be offered any suitable help, I don't want my record marked unnecessarily with details of my being trans that makes it easier for Nazis to round me up, like the Dutch Jews. Sounds paranoid? Perhaps, but it's always been a niggle in my mind given my family's experience of dictators in the past and the way that extremist regimes like to behave. Previously I thought the chances of a nasty dictatorship in this country was so slight that maybe I oughtn't to be so paranoid. Now I am feeling that my caution has been well placed.

This is a very brief expose of complex and controversial issues, but it explains my disgust at the poor acceptance and help trans people have had from the state. I don't perceive the situation getting better despite recent government consideration on how to improve matters. A different prime minister - and that is certainly on the cards - and trans people may be persecuted instead, probably with impunity.

These are bad times. Live authentically, but be careful of evil people as their wickedness never rests.

A lot of people write biographies about transition, their own or their partner's or parent's, and there are a lot of books that are very serious and supposedly academic about trans subjects, but there isn't so much fiction about transgender life.

Back in 2014 ( http://suerichmond.blogspot.com/2014/11/roz-white-transgender-writer.html ) I wrote about Roz White whose series of novels and novellas about "The Sisterhood" continues to grow and, to judge by online reviews, continues to be popular. Roz observes trans life from the point of view of five trans women who range across the spectrum and their struggles and triumphs and outlooks are very real and natural. A couple of years ago a national book club chose "The Sisterhood" as its book for reading and Roz was guest of honour at their annual meeting. So many readers in that club previously knew little of trans life and are now not only better informed but very supportive. A triumph for the genre of trans fiction and a positive boost for the trans community.

I see there are one or two other trans novels available online (e.g. "If I Was Your Girl" by Meredith Russo) and short stories (e.g. "A Safe Girl to Love" by Casey Plett). I might order one or two and see if they are good reading.

But the book that caught my attention recently was "Julian is a Mermaid", a children's book by Jessica Love. 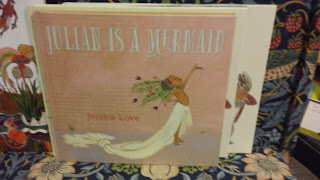 Plot spoiler: Julian sees people going off to the mermaid parade all dressed up in beautiful costumes and wants to be a mermaid too. He improvises a beautiful costume but then worries about what his grandmother might think. He needn't have worried as she helps him out with accessories and they go to the parade. It's not directly transgender but more a celebration of expressing one's individuality and has had very positive reviews online. The illustrations look beautiful too.

I'm hoping that even more writing about trans matters will move away from the purely personal experience of writers and into expressing trans lives in more creative ways that will appeal to the general public better.