I still have to write up the great three days I had with the Walkeys when they visited London in August, but let’s leave that for when the weather is grey and miserable and we need a reminder of summer.

But I have some special plans ahead and have been booking up accordingly.

First up is another trip to Berlin and this might be my first outing en femme on the continent of Europe. But we’ll see. Certainly Berlin has a long history of transvestites, as witness this well-known photo before the Nazis stamped on them. 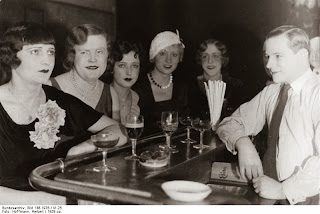 I'm going to be a barmaid again at the TGirl bar at London’s Erotica show in October. We did this two years ago and were a real hit (see my blog post here http://suerichmond.blogspot.co.uk/2011/11/barmaids-go-go.html). They insisted on our coming back, and this time they have given us a better pitch. It’s a great opportunity for us to interact with the public and show them that we are humane, elegant, hard-working, nice to talk to and personable. We improved the understanding of trans matters for so many people that it was a seriously positive thing to do, as well as being a laugh. Hard work, though. 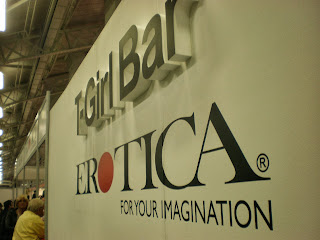 I’m also booking December’s Big Night Out at Pink Punters. A lot of my friends will be there and this seems to be becoming a tradition.

And finally, there’s Christmas. It may very well be another girly Christmas rather than one with family, like it was two years ago. That would be really festive.

So, it’s not all work work work (but I really ought to concentrate more on that!)

A break at the seaside

Well, I am feeling guilty. After the August holiday season you are supposed to get back into the rhythm of work and normality. But I squeezed one last bit of holiday time into early September by visiting my friend Stella who has recently moved to Brighton.

The British seaside is normally characterised by wind, rain, spray, fog and cold and the British themselves are a hardy breed, swimming in freezing waters with churning waves, eating ice cream in the cold and wet, and generally being determined to be in a Good Holiday Mood despite the howling sandstorm blowing over their beach picnic. This summer, however, the climate here has been wonderful and the weather was as perfect as it could possibly be with not a cloud in the sky. It was more like the Mediterranean (but with fish & chips).

I got an earlier train then anticipated which gave me a chance to visit the lovely little Lanes with their boutiques. I met Stella, looking amazing after a makeover at Mac, and we drove to her new home, taking the scenic route with the hood down - and getting compliments from pedestrians, too. A bit like Thelma and Louise, but without the violence!

In the evening we joined the local TGirls of the Clare Project for their monthly Posh Nosh gathering. It’s always good to meet other trans folk wherever they feel they are on the scale as there are always experiences worth sharing. This month they met at the Mesmerist pub, which I found agreeable enough. The food and drink were not bad and the atmosphere was pleasant (though the couple opposite snogging all night were a distraction). I had a good chat with several girls there. I’ll bear the meet in mind next time I go to Brighton. Here’s their website if you are in the area http://www.clareproject.org.uk

It’s so peaceful where the Stellas live and I slept like a log. The next day was a perfect cloudless sunny day. We had a lazy breakfast outdoors and I had a chance to sunbathe in their garden as Stella got ready. We drove into town and immediately went on the  Brighton Wheel http://www.brightonwheel.com/ which is a smaller version of the London Eye / Millennium Wheel and was moved to Brighton from South Africa where it had been set up for the World Cup. We didn’t opt for the official photo and souvenir guidebook as they wanted twenty pounds for them (!!!) so here are some of mine of the view of the pier and the beach. 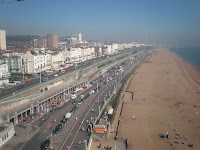 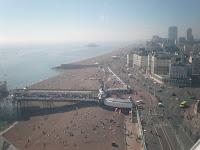 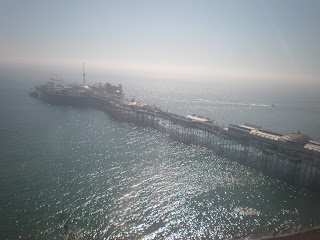 Though hot, it was also hazy in the distance so we couldn’t see all the coast of Sussex as you can on a totally clear day. Fun, and for £8 I though it was worth it (you go round a few times).

More shopping and back home for dinner outside in the garden as the evening drew in on a perfect summer’s day.

Many thanks to Stella and her wonderful wife for a lovely break. 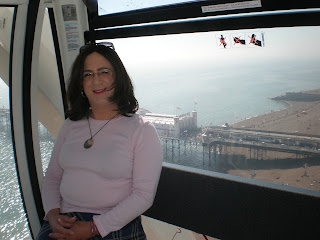 Sue x
Posted by Sue Richmond at 10:51 No comments:

Kings and queens and jokers

[ADD 15 March 2015: a few parts of this post have been altered in the light of subsequent events.]

I have just come back from sunny Brighton, which you will hear about soon. But first, London Kings Cross, three women and an amusing anecdote …

Last Thursday was a beautiful summer’s day and I met [some friends] at Kings Cross as we wanted to see the new development at the back which is replacing the old gasometers and run-down streets renowned in the last two decades for prostitution and general seediness. The wonderful ’50s Ealing Comedy The Ladykillers was set in the area, but it’s harder now to imagine Alec Guinness, Peter Sellers and Herbert Lom skulking in bomb-damaged Victorian terraced houses when you see the new glass and steel additions to the stout brickwork of former train sheds and warehouses. The Victoriana is still there, but disguised and reworked into the new Central St Martins art college (which is obviously now no longer central or close to St Martins). It didn’t take long too look around as, actually, this area is not going to be fully operational as a new office and commercial centre for another couple of years at least.

Funnily enough, Ann Drogyny had been there a few days before (see her blog entry here http://transfastic.blogspot.co.uk/2013/08/a-pheonix-rises.html) so I was mindful of her comments. Nevertheless we decided to have lunch at the Grain Store restaurant overlooking the fountain that boasts over a thousand variable jets. Lunch there was amazing. My starter was a pear and Roquefort salad which, although a dish you see from time to time, was very fresh with crisp endive. The poached salmon with peach and salted watermelon was extraordinary. I have never eaten this combination of foods before and never had salted watermelon but it worked brilliantly. The pudding of chocolate mousse, almond icecream and chocolate rice crispie cake was delicious. And I had a Roman cassis and clove wine, which was certainly interesting. My companions had the grilled woodcock skewers with pumpkin and leaves as a main, which they said was good. Service was attentive and pleasant and the staff were enthusiastic about the food, its sources and the way it was cooked. Though more than I usually like to pay for lunch, I thought it acceptable at under £39 a head. And the outside setting was very pleasant and the sun was lovely and warm.

My companions, having had the privilege (a somewhat dubious one in their view) of having been born girls, were again very full of questions about me and how being trans affected life and how I saw things going forward. It’s so hard to give answers that are full and can be comprehended by someone who hasn’t spent forty years wondering every day about her gender. When you are brought up a girl, you never really think about it, it’s just life. For me, it’s the question that’s been in my head every day since I was a toddler. How much mental effort have I expended in all that time? An awful lot. How many answers have I come up with for all that effort? An awful few! The trans community has a habit of isolating itself and gazing at its own navel rather too much sometimes and being asked challenging questions is vital in clarifying one’s own thoughts and feelings within the wider contexts of life and society.

And I got a lot of stick for wearing tights. Excuse me! They’re the lightest, most gossamer-thin 5 denier pair available, almost invisible and make my legs even more fabulous! I reckon it’s jealousy! But this girl is a hosiery uberfan and will always wear hosiery, whatever’s appropriate to the occasion. So there!

Anyway, we caught a lot of sun and one thing we agreed on was that being a little kiddie splashing worry-free in a fountain was a good thing to be.

Now, let’s end with a true story about Kings Cross prostitutes. They were famous at one time: the Director of Public Prosecutions about 20 years ago had to resign after kerb-crawling in the area and the whole phenomenon there became widely known. But my story concerns a guy I used to work with. Throughout the morning he would drink cup after cup of coffee. At lunchtime he would go to the pub and drink two or three pints of Guinness. Then he’d return to work and drink mug after mug of tea before finishing work and heading back to the pub for more beer. He must have had the most robust kidneys in the world because I never met anyone who could swallow so much liquid in a day. Anyway, his enjoyment of beer would often go on late into the night, so much so that he would sometimes miss the last train home and would be stranded at Kings Cross. However, he would just wait the four hours or so until the first train of the morning, get home, have a short kip, shower, and head back to work. Anyway, one time when he had missed the last train and was sitting out the night at Kings Cross station, a prostitute approached him with her cheery cry, “Business, love?” He politely declined and she went on her way. An hour or so later she passed him again. “Come on, darlin’,” she said, “’ow about a bit o’ business, then?” Once more he declined her thoughtful suggestion. Later that night she passed him a third time, with a further offer of her tailored services, with discount, and once again he turned her down. Annoyed, she shoved a pound coin in his hand and told him for Gawd’s sake to go get himself a cup of coffee!

Here’s to a new season and maybe a happier time.

It’s been a great summer, the best for many years, at least in terms of weather, and because work was quiet in August I was able to get out a lot and top up my tan. Indeed, I have several enjoyable events still to write up. I’m hoping to go and stay with Stella in Brighton this week, work permitting.

I’m afraid, though, that the stone in weight I had to lose at the start of the year has now turned into two stone to lose. Oops! Time to reregister at fat club, I reckon. (Sorry, don't know what that is in kg)

I have always tried to share as much positive stuff as I can about being transgendered. It’s a pest being trans but I’m determined to make the best of it. Truthfully, though, it’s been a very draining summer emotionally with all my family on the operating table in one way or another, my friends gender surgery going badly wrong, various awkward neighbourhood matters, a supportive friend’s death, and hearing recently that a TGirl friend was badly beaten up by another deranged TGirl who threatened to kill her and outed her to the neighbours. None of that has been good so blogging positively has been hard.

So I’m hoping for a more joyous autumn. I hope it will be for you too. 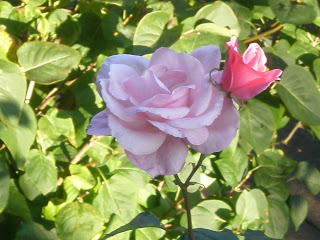