This blog has just had over 20,000 page views. Wow! thanks for reading. I’m still writing up what happened at the TGirl bar but I thought I’d just mention in the meantime a visit last weekend by one of my best pals, Maddy Watson, who is best known as one of the bossladies of the Nottingham Invasion. I’d invited her ages ago and she finally managed to visit.

Our big day out was Saturday when I took her by train and Underground to the West End. It was her first foray onto public transport, which is always a frightening prospect, but it has to be done. Our journey was uneventful, as ever. A nice coffee at Vergnano’s to wake us up after our heavy dinner at home the previous night and we made our way slowly to Belgo Centraal. Maddy likes her beer, you see, and where better to try excellent beers than a Belgian restaurant, especially one where the waiting staff are dressed like Trappist monks! Our waitress, Roxane, was excellent and recommended some really good beers to go with our food. We were joined by Helena and Tanya and we managed to sample eight different beers between the four of us. Very enjoyable, as you can see.

A stroll round Covent Garden (which includes a compulsory visit to the Kurt Geiger store with its luscious red sofas and mirrored walls) and we stopped in a nice little pub, Nell of Old Drury, just opposite the Theatre Royal.

We looked at the lights of London from Waterloo Bridge and then Maddy had the idea of going on the London Eye. I went on it when it first opened in 2000 (when it was called the Millennium Wheel) but I haven’t been on it since, and that was during the daytime whereas now it was dark. The morning rain had washed the sky clear and you could see everything. It was nice to chat to a couple of young women in the queue in front of us and nobody took the least bit of interest in two TGirls in the pod, so we snapped away at the view. 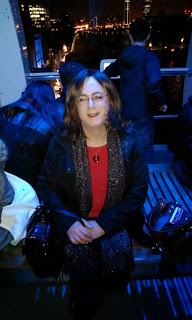 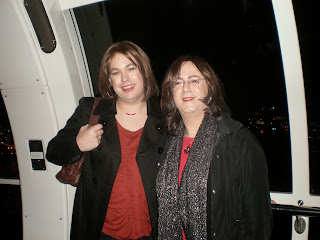 We had agreed to meet Joanne later that evening but we stopped off at another favourite pub, the Ship & Shovell in Craven Passage near Charing Cross Station. The pub is split between the two sides of the passage and the smaller, snugger part is my favourite. We ate dinner at the London Chinatown restaurant and joined Joanne at her workplace, the Cambridge, right in the heart of London. All in all, a very good day.

I was sorry to say goodbye to Maddy on Sunday. She’s one of the girls from the Class of 2010 whom I met when I first started going out and we’ve had a load of fun and laughs together. I even painted her portrait for my series of paintings of trans people. I really enjoy taking friends round London and am looking forward to my next guest. I must try to get back to the Nottingham Invasion soon which has been an amazing success thanks to her promotion and that of her partner in fabulousness, Sam.