Last Thursday I went to vote in Britain’s surprise election and then got on a plane and left the rest of the country to deal with the fallout. The political situation in Britain is really toxic. But I’d rather talk about my holiday in Germany and the interesting talk on trans matters I had with one of my hosts.

Berlin is a place I’ve been to many times. Fascinating from a historical point of view, if disturbing in so many ways. The city now is vibrant and very liveable, despite the many problems that all big cities have. This time I stayed with good friends, who are a gay couple.

As far as sightseeing went, I visited Potsdamer Platz, which used to be a bombed out wasteland with the Berlin Wall running through it but is now a buzzing business district with new office blocks and the commercial Sony Centre, a good place for a coffee. Some buildings have been placed right over the old demarcation line, a symbol of the formerly divided city being reunited.

Just up the road is the Holocaust memorial that covers the site of Hitler’s infamous Bunker. It’s hard to know how to represent the atrocity and the artist has created an undulating landscape crisscrossed by avenues of concrete blocks that vary in height and tilt, a symbol of the confusion of victims in a supposedly ordered system that has no human connection. It certainly has a weird effect on the mind as you wander into it – you can see a way out, yet you are hemmed by this dark oppressiveness. 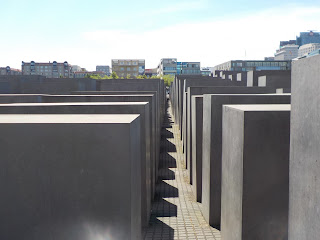 The Soviet War Memorial, put up immediately the city was captured, though it subsequently ended up in the British Sector when the city was divided among the four victorious powers, is now open to the public. I am delighted to see that little sparrows have made their nests in the barrels of the two tanks and two guns that form part of the monument. 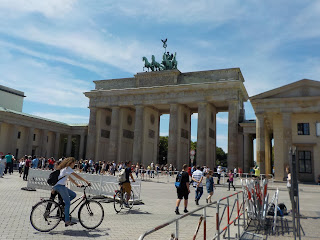 The German Technology Museum is brilliant. Built around the old train sheds of a bombed station, it has a wonderful collection of railway locomotives and carriages, many locos in the characteristic black with red wheels. The aviation and shipping galleries are superb, too, and the section on rockets is important. I was interested to see a model of the German warships lying on the bed of Scapa Flow, which I visited last year, and that the war rockets and buzzbombs on display were all on loan from British institutions, as if a little kid had asked for his ball back from the neighbour’s yard! Plus, there's a Dakota on the roof! 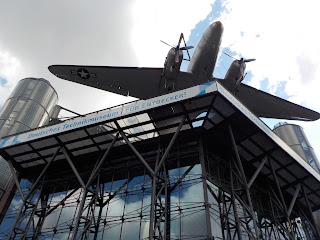 As well as Berlin itself I took a boat with my friends on the Wannsee lake on the outskirts of the city to Kladow and we enjoyed lunch in a restaurant with a beautiful walled garden shaded by trees. Even in these idyllic spots you can’t get away from grim history, though – the boat passes the house of the Wannsee Conference where the Final Solution was agreed early in 1942, and the nearby Glienicker Bridge is where US and Soviet spies were exchanged during the Cold War. 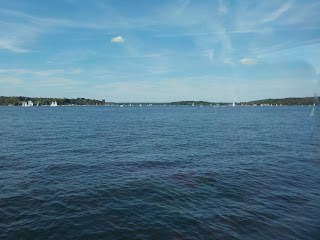 Life’s better for all now with less political extremism, distrust, hate and violence, I’d say. It’s pointless asking some of contemporary politicians to note this fact, though.

There was also the annual asparagus festival in neighbouring Brandenburg. The North European Plain is dull, flat and rural and Brandenburg is a fairly typical part of it. I’ve never been all that excited by asparagus but the stalks grown here in the dark end up ghostly white and plump and, coupled with a local lake fish, the Zander, they makes a tasty dinner. I tried this fish elsewhere with ham and saffron rice and it was even better. By the way, German wheat beers are wonderful.

I also spent a few days in Dresden, rebuilt largely as it was before the 1945 air raids that destroyed the city. And very fine the buildings look, too, like a small-scale St Petersburg that was built at much the same time. They contain some of Europe’s most significant artworks and scientific instruments, collected and commissioned by the Electors of Saxony. Dresden is relatively expensive, though, being a bit of a tourist trap. However, it was very worth visiting.

Although I had brought my makeup and hair with me I didn’t, in the end, go out in full femme. My clothes are virtually all female clothes but are essentially unisex most of the time. The reason was that, although Berlin is full of gay and trans people, my friends felt it was a little more dangerous in their part of town. That’s their official version, which I’m not really convinced by. But, in fact, I think they felt slightly uncomfortable about it since they don’t fully understand trans matters. They already feel a little bit discriminated against and not always well received as a gay couple by their neighbours and perhaps compounding this by being seen in company with a TGirl was more than they felt happy with. I feel one should respect one’s hosts’ wishes, whatever the motive.

But I did have a long chat with one of my friends about crossdressing, which he used to do a lot in his younger years with his mother’s blessing (lucky boy). But for him it was just that he wanted to pretend he was an air hostess or a princess, just for play. It was the role that was important. He felt puzzled when I said I dress as a woman because it’s the easiest way for people to identify what I am and that I want to be treated as a woman, and I felt he was challenging me to prove I wasn’t just adopting a role as he used to do. It’s hard to prove something that you yourself don’t understand and nobody has yet come up with an explanation for. I think part of the lack of understanding that gay people have for trans people stems from the fact that, although we are often lumped together, there is no direct connection between sexuality and gender. Being gay (or straight) is about who you like to sleep with; being trans is who you feel you are.

Just to round this off, you may like to know that one ruler from the junior lines of the house of Saxony, Augustus the Duke of Saxe-Gotha-Altenburg (reigned 1804-1822), was evidently transgender and liked to be called Emilie. (His grandson Albert was Queen Victoria’s husband.) And it seems like he was not the only one in that extended family to be. You see, you can't get away from the fact that transgender people have existed throughout history. Yet history shows also how little understood we are.

Mainly, though, I feel rested and that can only be good after a difficult 12 months.