First steps in trans living 3: getting out the front door

A great deal of trans life takes place in clubs and dedicated venues. You turn up there or to a nearby hotel, you put on your dress and makeup and then enjoy the fun for a few hours as the girl you really are and then you take it all off and go back to the reality society sets out for you. It's satisfying, but only partly.

So, continuing this series of reminiscences from ten years ago, today I recall the first excursion directly from home, which needed to be done if I was ever to feel free to live as I wanted.

If you have a car then you can avoid some of the difficulties of leaving home dressed. A car is in many ways an extension of your home world, a bubble surrounding you from much public interaction. I got rid of my car years ago as public transport in London became outstandingly good in the 2000s, but that left me with no option but to leave home on foot, with the potential to be spotted by neighbours and therefore outed, which I wasn't ready for.

In fact, the first attempt I made to step out the door I had to abort through a crisis of nerves. What was the world outside going to do to me? Even with much discussion on this topic on trans forums, I still wasn't sure what lay out there. Later that day I left the house with my heart in my mouth, walked around the block and came straight home, trembling. Yes, I was that nervous.

The following day I decided to do something longer. Again, I was nervous as hell but, having stepped out and locked the door, I deliberately pointed myself away from the nighbourhood and walked to the wide main road where I felt the traffic was too fast for people to stop and stare. I walked ...for miles. It was in one way a joy to feel free as a woman out in the sunshine; in another way, it was still very scary, but I decided to go as far from comfort as I could push myself.

I ended up at Kew Gardens, the famous botanic gardens. I had a season ticket. And do you know, the woman on the gate scrutinised me carefully and asked why I had a ticket in a man's name. I'm flattering myself I passed. But I suspect she was being extra rigorous. So, dear readers, the first thing I ever did as a woman on her own, was have to convince someone that my male documents applied to me after all. In some ways, I see the funny side of it.

Having been walking for an hour I needed the loo and for the first time went to the women's public toilet. It was empty, thankfully, as I would probably have been too nervous to have shared the space with someone else.

But in the vastness of Kew Gardens I felt free to move at will and avoid people and that made me much calmer. I took some selfies but they are not my favourite pictures so I won't post one here. Instead, here's one I took at Kew a year later wearing the same floral skirt and red top to give you some idea. My beautiful friend Petra was there with me this time. 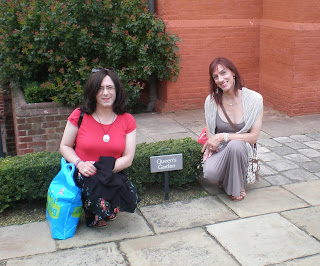 I was impressed by what I had achieved and I wondered what was next. I could just walk all the way back home or ... I could be more daring. I had amazed myself, if I'm allowed to say so, and I left Kew Gardens and went to the station for my first ever trip on the London Underground. I only went one stop, to the end of the line at Richmond, where I bought a sandwich at the buffet. That also took a bit of effort as, again, it's not something I had done en femme before.

I ate my boring sandwich on the station bench, reapplied my lipstick and waited for the train to Kingston as I had now decided to push myself as much as I could. Kingston is a major shopping town in South West London and I spent a couple of hours going into department stores to buy clothes. I couldn't believe that here I was just looking through the rails of clothes like any other woman. The fulfilment of a lifelong dream.

I went home by train, barely believing all that I had done on my first day out of my own home. I knew I still had a lot of ground to conquer, but this was a major step.