I wrote last month about coming out to lovers. Since accepting I was trans, my own policy has been to do so early on in a relationship. In my last post I expanded on how I feel that life is a bit cruel because many suppress their trans nature when settling down into a relationship and starting a family, only for it to demand attention twenty years down the line. At which point there is a real dilemma as to how to deal with it.

Most people I know have spent that rediscovery time in stealth. Either they hide their girl kit and dress only when the family are out or they venture out and lie about where they're going. Relationships often, sadly, involve lies on all sorts of things: money, affairs, redundancy, health ... so the fact that you've sneaked out dressed as a woman but said you were at the football is hardly a whopper in comparison. Let's face it, revealing that you are trans to your loved ones is a big topic needing a large dose of courage. I don't blame anyone for creating a hidden life for the girl in them.

Of course, you have to prepare for discovery. Your partner will want to know why you didn't say before, will ask if you are gay (illogical, but it will get asked), will ask if you want to change gender and a thousand other questions. He/she'll be especially cross if you've been spending the family money on girltime. And if it's not discovered, you end up with a split life anyway.

I'd say that if you feel the need to hide your trans side from family, don't be like one person who, over 30 years, elaborated a whole second life revolving around sports matches to hide her trans trips from her wife. In other words, she was out and about as a transwoman only when a certain team was playing away or certain tournaments were on, and had to keep an eye on the score when out in case her wife rang for an update, when we all had to pretend to be her sporty mates. When I wondered if this was a little complicated and restricting, her explanation was that she loved her wife and didn't want to hurt her. It's funny how we can lie to ourselves as well: lying to the wife is OK, spending lots of money is OK, going for a fun weeked but leaving the wife at home is OK, and treating her like an idiot who falls for these lies is OK! If I were the wife, these endless lies and, more significantly, taking me for a fool would hurt me more than the fact my husband was a crossdresser.

Don't be like the idiot TGirl who went out lots of times and said to everyone that her wife knew about her trans side, accepted it but didn't want to join in. Then it transpired that the wife actually knew nothing of all this when I got a weird set of texts from the wife asking if I was having an affair with her husband. Er, no, I certainly wasn't and I couldn't work out why she thought it possible. It seemed laughable at first till she told me that her husband's trans life was all news to her, and I learned that the TGirl had said I had led her on and had lent her clothes and wigs, all of which was untrue. I was shocked. So this awful TGirl was some kind of pathological liar who lied about everything. Needless to say, I've not wanted anthing more to do with her. There are, however, postscripts to this tale. A few months later I got a text from the wife saying how happy she was with her crossdressing husband and how we were now all going to be the best of friends but there'd be trouble if I complained about her lovely husband's lying. And other communications over the years about being friends. No, thanks; with friends like these, who needs enemies, eh? In the end, I did a bit of research on these two. The wife herself works in the public sector and online there's the verdict of a disciplinary hearing against her, for taking extended time off work claiming she had to look after her husband since he was ill yet also violent, which was untrue and - get this - news to him. So I'll be leaving these two mendacious psychos to enjoy each others' company well apart from mine. I chose this example to show you how a web of lies can get totally out of hand and involve other people unjustly. So if you feel you have to lie to your spouse - and you're in good company there - be intelligent about it and don't create chaos all round.

These are two extreme examples, but there are so many trans people essentially in this position. Last year I wrote about the courage one needs in life, especially in living as trans and coming out. How to tackle one's family on this topic is inevitably very personal. As I said last time, a strong loving relationship will usually cope with the revelation; a weak one probably won't and you may need the courage to tackle what's wrong in the relationship before opening up about your trans side.

There's one other aspect of trans life and relationships that can't be ignored and that is sex and sexuality. Although gender and sexuality are not directly related, having a gender-different partner may make a big difference to the way they approach sexual relations. A big topic for next time.

Personally, I feel it better in the long run to be truthful than maintain secrets and tell lies, but your situation may require a different approach. I don't judge you on your choices and appreciate how your need for caution may involve deception of some sort. I wish you a good outcome so you can lead your trans life safely and happily. It shows we have a long way to go before living as trans is something that doesn't bother anyone and we never have to hide.

It's a bit of a struggle with Covid infections and lockdowns still going on after a year, isn't it? So I've been looking back at my photos of happy times. Here's me and my friend Jo from Devon at the sunny Sparkle festival in 2011, taken by Manchester photographer Sheila Blige. 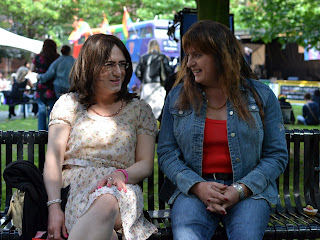