It's certainly spring here now and there are delicate flowers everywhere. This area is known as the Riviera of Flowers as the bulk of the cut-flower market is supplied from here. Flowers that need a bit more protection are grown in greenhouses that cover a lot of the landscape as you head towards the mountains (see photos). I was about to say they're stone's throw from home but somehow glasshouses and stones traditionally don't mix so I'll say they are a short walk from home. 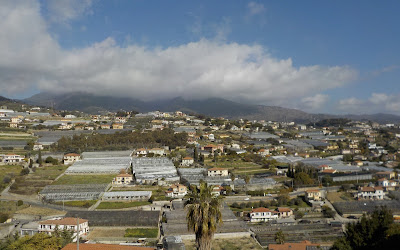 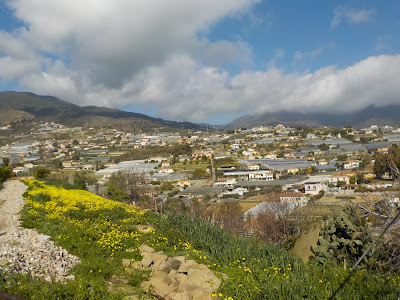 You also see many small shrines at crossroads or road junctions, usually filled with flowers. These days these shrines are Christian and there is usually a statue of the Virgin Mary inside. 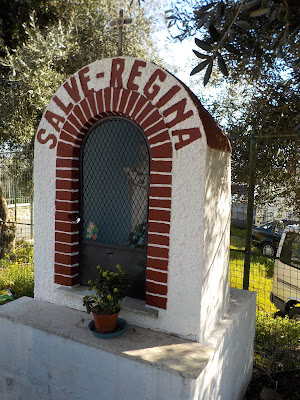 Of course, the practice of putting a shrine at a junctions is much older than Christianity. Here such shrines used to be dedicated to the goddess Diana Trivia, i.e. Diana of the Three Ways, who presided over these difficult spots. Difficult because, before there were road signs, a traveller unsure of his way might take a wrong turn and get badly lost; because crossroads were a favourite place for highwaymen and footpads to hang out as there are twice the takings to be had from two roads than there were on just one; and, more mystically, because crossroads, doorways and the like are where spirits were believed to congregate, as they did between one world and the next. Diana was also closely associated with magic. You can see why such a deity would watch the crossroads. These days, Mary seems to fill in for a lot of roles previously taken by feminine deities.

I guess crossroads are on my mind because I've been stuck at a crossroads for some years. I was caught by the Covid crisis with my life and belongings scattered in various places, including 90% of my clothes in England while I am in Italy. Yes, I've bought more here, but it's not quite the same as having old favourites. So now I'm beginning to plan what I hope will be the final phase of my move which I hope will be completed later this year, assuming that the bad things at the crossroads - bureaucracy, Covid, Putin? - allow me to continue on my way.

Joke of the week

So the winter olympics have now ended.

Do you know, I once won silver for curling and bronze for the bob?

But the title of Hairdresser of the Year still eludes me!

A short piece of LGBT history. 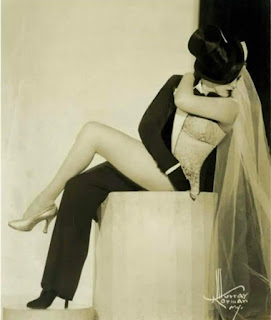 The "Half and Half" act by Zorita, stage name of Kathryn Boyd, bi burlesque dancer. Zorita is dressed half as bride, half as groom.