An openly gay boss I once had sighed one day, "I'm celebrating my 49th birthday this weekend. Which is 256 in gay years." So, continuing this throwback to ten years ago, before this blog began and the world was newly formed ... OK, no, that's too much of an  exaggeration, but in trans years it was a VERY LONG TIME AGO. My second big trip, just a few days after the first, involved my piggy-backing my need to get out en femme onto an unusual event.

Many trans people rely on fancy dress events to get a chance to be out as themselves without attracting undue comment. Events like Hallowe'en or Carnival, the school prom or the local drama club, and similar. So the opportunity I had to be out in public was the Great Drag Race in 2010.

Nothing to do with RuPaul, this was an event organised by Prostate UK and Prostate Action, charities (now amalgamated as Prostate Cancer UK) that fund research into prostate cancer and look after sufferers and their families. A good cause, not just for men and their families, but transwomen too as, even after transition, the prostate may cause problems. The reason it was a race in drag was to acknowledge the high-profile work done by women for breast cancer care with events like the Moonwalk or Breast Cancer Awareness Month.

I'm not a drag queen and, frankly, neither was any other participant, but here was a chance to be dressed in public, with praise for doing so thrown in. Win-win! I had various sponsors and had brought my friend Ange along with her camera.

It was quite a high-profile event, held in London Fields, a park in North-East London, and the compère was Peter Duncan, best known for his TV shows, notably Blue Peter *. A very personable, down-to-earth man in real life.

So although most of the participants being sponsored to run were just men who'd borrowed something off their wives, some of us like to think we were a bit more like the real thing. In fact, as I applied my makeup, one guy looked over at me and said, "You've done this before!"

My official portrait photo from the event is at the top. The unofficial one by Ange is at the bottom.

Now the first thing to do when ready was to break a world record. With ten minutes training from choreographer Lisa Lee we formed a chorus line and danced (or flailed around) for five minutes. Guinness World Records considered this activity sufficient to qualify for the title of Longest Line of Dancing Drag Queens Ever and so, dear readers, I am a world record holder with an official certificate to say so, and if Roy Castle were still alive I'm sure he'd tell everyone on his show about our outstanding achievement. Dedication and all that. *

The race itself was 10200 metres overall (six and a third miles), representing the 10200 people who die from prostate cancer in Britain each year. It was a warm summer's day and, frankly, running that far in a wig is no joke. The hair I chose was a cheap but light purchase from Doreen's fashions (a shop for trans women that sadly now exists only online). I did wear sensible running shoes but swapped them for four-inch court shoes for the last lap, and waved a pink umbrella too! Frankly, such shoes are not for running in - I bruised my toes!

It was exhilarating being out in a very public place in this way and thereby gain more confidence. I spotted another TGirl there. You could tell, we actually looked different from the rest. It was her first time out in public and, incredibly, she came on the Underground dressed already. I didn't actually talk to her because of our unspoken etiquette that you don't point out to a TGirl you may have spotted that she's a TGirl, even if you both are. I won't give her name as she's changed it anyway, and has been living and working full time female for some years now, but it was good to know that someone had had the same idea as me. We have become good friends since.

There's not a lot online about this event any more although I did find this on YouTube which gives a bit of the flavour:

Thanks to Ange for giving moral support and taking the photos and for the people who sponsored.

* Note for non-British readers:
Blue Peter is a children's magazine show that has been running on BBC television since the 1960s.
Roy Castle was a musician and entertainer who had a TV show for children called Record Breakers. "Dedication" was the lousy theme song that he sang at the end of every episode. 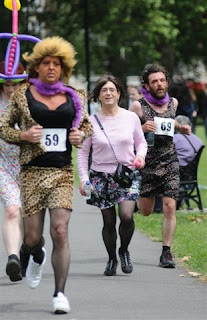 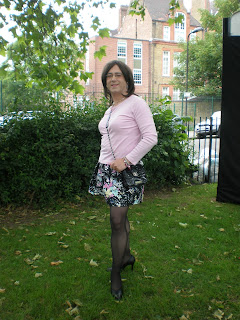