Halloween at the Magic Theatre

I’d heard much about this occasional event, Magic Theatre, at the Rivoli Ballroom in South East London and thought it worth going to see what it was all about. The Halloween ball is said to be the biggest event of the year so it seemed like it would afford the best taste of the experience.

I met up with three friends, Joanne, Tiff and Mrs Tiff for a bite to eat, at the Victoria pub in Peckham, where the Halloween theme was being taken seriously. We arrived fairly early at the Rivoli Ballroom. I must look up the history of this venue as it is located in the most unlikely part of London, a quiet suburb, not really anywhere. Why it was built there of all places merits investigation (in a nerdy moment sometime). We were wise to get drinks and a table immediately at one of the bars as it became clearer later in the evening that Rivoli bar queuing may well become an Olympic endurance sport. I heard a rumour that there were 700 people there. Although a Halloween themed ball, it was clear that any reasonable – and preferably flamboyant – outfit was acceptable. The very few people who turned up in jeans stood out badly. Everybody is there largely to check out each other’s efforts in the costume department. Now, I thought that my black satin and net dress with long spiderweb gloves and tights was suitably exotic, but I was pretty underdressed compared to most! I think the devilish Klingons win my prize for best outfit, but there were some gorgeous Frankenstein’s brides, a very sexy black cat, Darth Vader, and plenty of devils who were certainly hot! The place is obviously a magnet for T-girls – honestly, those trannies get everywhere!
It was nice to see other friends there, notably Irene, Stella and Mrs Stella, and also to have a brief word with the lovely Jodie Lynn who helped me with ideas on makeup and clothes in my very early days as a T-girl when I was visiting her Boudoir dressing service.
A live band, burlesque acts, dance music and an after party at the bar down the road made for a fabulous evening. The ladies’ powder room is attractive (but negotiating the loo with all that gear on is an undertaking!) and the cloakroom is efficient enough. I’d had to work during the day (unexpectedly) which meant that I couldn’t keep going as long as the others, which is annoying.
All in all, an event well worth attending. Next time, though, I shall have to wear something seriously flamboyant! This is just too ordinary! 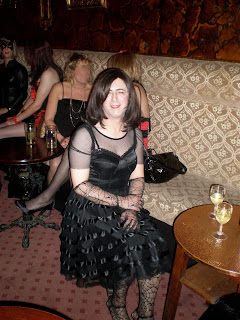 Email ThisBlogThis!Share to TwitterShare to FacebookShare to Pinterest
Labels: Events, Out and about