I managed to take a few days out for a quiet little holiday as a woman, staying with another trans friend at her home on the Isle of Wight. It’s the first proper holiday I’ve taken as a woman and it was brilliant.
I’ve only ever spent one day on the island before so it was all fairly unknown to me. Perhaps November is not the best time of year to go but the weather was better than average and there were a couple of lovely sunny, mild days to enjoy the scenery, which is certainly beautiful with its rolling landscape, boats on the tides, thatched houses and glimpses of the sea with ships, forts, cliffs, and the mainland in the distance.
I travelled there by train and ferry with no problems at all and, best of all, was treated with helpfulness and politeness by rail and ferry staff (“thank you, Madam” – and thank you, you nice person). I was also delighted finally be able to squeeze myself (just) into 28”-waist superskinny jeans. My eating regime is working! From the ferry terminal at Ryde my friend drove us home and then we took a grand tour of the island stopping at Brading Down and, after a drive along leafy lanes and through the open and barren landscape of the south coast, the famous Needles at sunset. Wonderful! 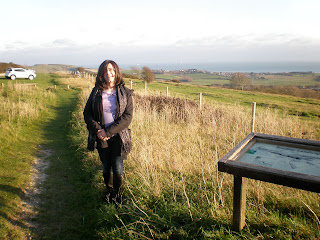 Brading Down, IoW: sea, sun, slopes, superskinny jeans!
A day of girly shopping in Newport was also pleasant. All the shop staff know and love my friend! It’s the sort of local friendliness that’s rarely found in a big city like London. I bought a soft satin blouse that may serve for my barmaid uniform at next week’s Erotica T-Girl bar.
What else? Well, T-girls can hardly resist examining each other’s wardrobes and comparing notes and trying things on. As she and I are pretty much the same size, that was a delight. Her amazing shoe collection puts Imelda Marcos to shame. Especially as, unlike Imelda, these fabulous shoes were all bought with legitimately earned money. I have borrowed two rather fun black skirts for my barmaid uniform, which are better than what I have at home.
We watched the first episode of C4’s new series, My Transsexual Summer, which was pleasing viewing, though I reserve judgment till the end of the series. They certainly seem a nice bunch of guys and gals, and I was glad that the transman contingent pretty much balanced out the transwoman group.
As thanks for her perfect hospitality, I treated my friend to lunch at a beautiful riverside pub, the Folly Inn, overlooking the Medina. The food was really excellent, as was the view of a receding tide with wading birds and boats, all in bright sunlight that shimmered off the water.
I was quite sad to leave the tranquillity and tolerance of the Isle of Wight, but I think I may be returning regularly now. It was a joy to spend four days en femme with no schedule and just relax and be looked after in a calm, quiet location. My batteries have been recharged for the crazy rush to Christmas that London is now gearing up for.
Sue x
Posted by Sue Richmond at 22:27

Email ThisBlogThis!Share to TwitterShare to FacebookShare to Pinterest
Labels: Holidays, Out and about