Sometimes it seems that life kicks you in the face. Pretty literally almost. I have the most appalling bout of eczema on my face.

I’ve suffered from eczema all my life, not as badly as some poor people, but it’s been rare for me to have no patches of this unsightly, painful and itchy skin condition. It will usually flare up somewhere over a period of 48 hours and then stay settled in that spot for a couple of years before vanishing as fast as it came. I then get a few days relief before it reappears elsewhere. It’s usually just a small patch, maybe an inch big, or several smaller blotches. The worst bout I ever had was in my very early 20s when it attacked my face and hands and was incredibly painful. Deep fissures appeared in the flesh of my fingers and shaving was destructive as it took my skin off. That was anguishing and no amount of time spent with skin specialists at the London Skin Hospital and St Thomas’s Hospital, trying every remedy known to medical science, had any real effect. In the end, after three years and much treatment, the specialist suggested that maybe I should stop shaving. So I grew a beard and that provided relief until the problem went away of its own accord. I was at that time trying to rid myself of this crazy trans thing anyway so I thought being a beardy bloke would help. It didn’t, of course, and beards weren’t much in fashion either, so I was glad when I could get rid of it. Since then I’ve tried just about every alternative kind of remedy too, vitamins, herbs, homeopathy, Chinese. Not much better, but a few things do help, notably chickweed.

Well, now that it’s been back on my face, red and painful and flaky and itchy, for two weeks I am beginning to despair. I know more now about possible causes and remedies and am doing everything I can to reduce and soothe it, but I am losing hope as I know how this thing operates and being settled for a fortnight already is not a good sign. You can imagine, after successfully getting out in public as a woman at long last, how I feel now about the possibility of growing a beard again for two years. I feel sick, actually.

I managed to go out as planned last week to go shopping with a friend and went out the other night with the Brick Lane gang. These were one off events and my condition was covered by thick makeup. But I daren’t shave my face every day at the moment so I am either confined indoors or have to do everything in stubbly male mode and whilst I’m now less bothered by male mode than I was a couple of years ago, it’s definitely not what I want. I was planning to spend a long weekend in Brighton next week but I’m not sure that’s viable. As for the four nights I have booked at Sparkle 2014, it looks like that’s all in jeopardy.

I don’t know what the cause is. Nobody quite does and there are many suspected, different causes. Stress, contact with certain things, an outward manifestation of inner illness (heart, bowel) … I am becoming more certain that my own eczema is largely linked to dust and things like mould or certain chemicals. I don’t use perfumed soaps, oils or chemical-filled products for cleaning myself or my laundry. I know that contact with mould can set it off as well as harsh chemicals such as white spirit, turpentine, motor oils, etc. The worst bouts I have had were when at school, college and in office jobs. In fact, when I stopped working in an office it largely cleared up after 40 years in that kind of dusty, enclosed educational/employment environment. I am keeping my face and head as clean as I can with pure shampoos and soaps and the one thing that seems to provide relief is chickweed salve. The one I got from my health food shop three days ago is already improving the itching and blotchiness. If you want to know what it feels like, try burning yourself and add itching powder to the burn. But don’t scratch. The relief from scratching is only immediate and damages your skin so you are worse off when you have finished, and you’ll still feel itchy. It can keep you awake at night. Because it looks unsightly, friends who usually kiss me goodbye have declined to do so this week. They won’t catch anything, but it’s offputting. I don’t blame them but I can’t help feeling sad at losing this sign of affection.

I cannot describe the distress I feel at the moment. After all this effort to get out, come out to friends, and generally make way in the world as a TGirl, to be thwarted like this is agonising. I’m grateful to so very many friends who have been supportive but I’m going to have to decide soon what course I’m going to have to take. I wouldn’t put this post up if I wasn’t now genuinely worried.

Please hope for the best for me.

UPDATE 11 May 2014: Well, now that Conchita Wurst has won last night's Eurovision song contest there might very well be a surge in acceptance of bearded crossdressers, so I could be all right! (And what an incredible coincidence that she popped up on the day I wrote this page.) 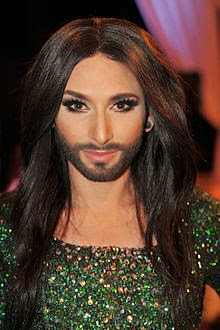 When I am in need of hope I buy a little plant and nurture it. A tiny money plant that I bought when I first moved to my current home was to hope that it would be a good home for me. Well, I have lived here for 18 years now and my plant's offshoots are now propagated in pots all over the house. When I was made redundant and thought of going self-employed I got a tiny spider plant and it seems happy and my work is going very well. So yesterday I got a weird-looking thing that the stallholder said was related to lilies but I've never seen before and I intend to nurture it in the hope that my nasty face thing will go away. I'm not superstitious but I think that seeing these little planties helps focus my mind on what it is I'm needing to happen. So meet Bethany, the Weird Lily Kind of Planty Thing: 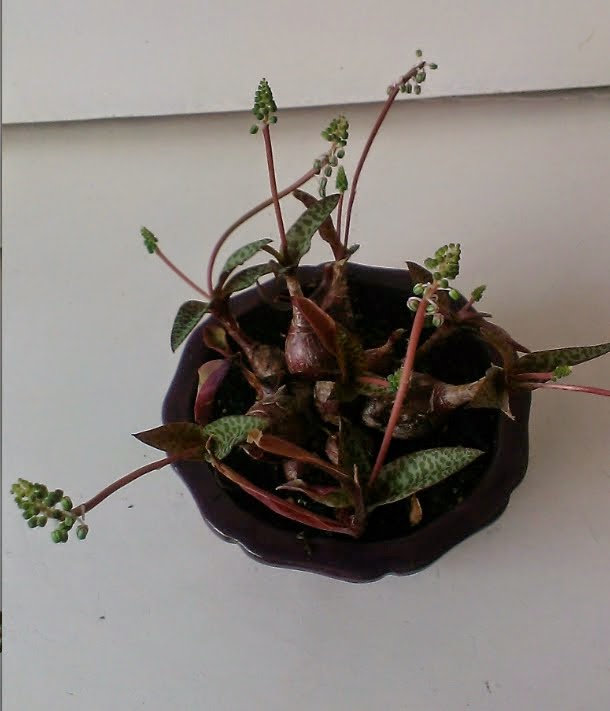 Help me get better, darling. There can't be room for more than one odd-looking thing here, and that's you.