By popular request, here’s part 2 of my androgynous holidays, with pictures.

I went away three times in September, for different reasons each time, but always with the aim of clearing my mind, which has been troubled of late.

My first trip was to Wiltshire, which is really the first county west of London where you no longer feel the gravity of the capital drawing you towards it. I wanted to fulfil a few promises made to me when young, and to be as feminine as possible whilst still presenting as male.

Avebury is a wide and very ancient neolithic henge of stones, ditch and mound that was partly encroached on by a houses in the Middle Ages. No-one knows what these ancient monuments were for or why they were built but the effort required to construct them and the many other ancient buildings and artefacts in the area suggests a place of great significance. You can look up a lot about it online. I went because the more famous Stonehenge was often on the itinerary when we went to Wales or the South West for family holidays when I was a kiddie, but my father always said Avebury was bigger and better, yet he never actually took us there. So it was something that had always been on my “To Do” list.

It’s certainly a beautiful spot with ancient buildings and sheep encroaching on the stones. My bed-and-breakfast hotel was lovely and the village pub provided a good dinner.

The next day I fulfilled another promise to myself, which was to walk more of the Ridgeway, possibly Britain’s oldest road that has been used for maybe 5000 years. I did some stretches in Buckinghamshire as a teenager with my father. This time, however, I was kitted out in my girl clothes, though not presenting as female. My walking boots and purple socks are women’s (as I explained in my last post, I have tiny feet and I often can’t get men’s shoes and socks in my size), as were my T-shirt, fleece and trousers. I’d rather be all woman, but clearly my skin health problems have made me very cautious about wearing makeup except on special occasions. I wear women’s clothes every day anyway as it’s the most obvious connection to my feminine side.

The weather was perfect and the walk was wonderful. I felt tired but calmer in spirit when I arrived at my destination in Ogbourne St George where I stayed in a cosy old hotel and had a fantastic dinner in the wonderful pub called the Inn with the Well, which does indeed have a well – 97 feet deep, right in the middle of the floor with reinforced glass flush with the floor so you can walk right over it. The warm mackerel starter, rabbit casserole main and warm chestnut & choc pudding, with local lager to drink, made an excellent dinner that I will remember for a very long time. And the road leading to the pub goes into my book of daft place names … 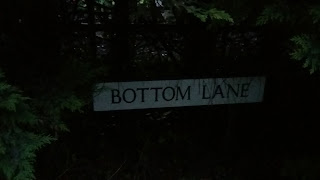 Mind you, the little River Og, which gives its name to the village, is a pretty odd one, too. I should explain that when I was 10 my classmates and I found in a school geography book that there was a place called Bushy Bottom in Sussex. As 10-year-olds we thought that was hilarious. Since then I've kept a note of places with ridiculous names, like Batman in Turkey or Bastard Butte in Wyoming. Sadly, Butt Hole Close in Yorkshire has recently been renamed. Apparently people had been posing in illustrative fashion by the street sign. Such models who feel dispossessed can now venture to Ogbourne St George if they prefer. It's all very silly ... and I am doing nothing to stop it.

On a related note, the train to Swindon (from where I took a bus to Avebury) whizzed passed a weird sight: a man standing in a cornfield, naked but for a pair of tiny blue briefs, holding a 15-foot pole vertical. There was some device on top pointed at the train - a camera, speedtrap, I know not what. The sights of England, eh?

The next day, I went to beautiful Marlborough, which has always been a favourite place to visit, though I haven’t been there for years. It never changes: the broad high street, the curious alleys, the old shops, the weed-stocked River Kennet flowing gently by. The Green Dragon pub where I had lunch put me in mind of the fictitious Dragon of Wantly inn that appears in Anthony Trollope’s Barchester novels. I think Trollope is a marvellous author and Marlborough is very much a Trollopian town.

A lovely trip that calmed me after a lot of troubles with plumbing and other stuff to deal with in August.

The following weekend I went to Bath and the distressing conversation with my sister about Lugbutts (LGBT people) has been recorded. Despite that, there were walks to be had all along the River Avon, especially on a disused railway line that’s been turned into a path and cycle track running all the way to Bristol. The irony is that my sister didn’t seem to spot that my shoes and socks and shoulder bag were women’s! I did clip my nails so they wouldn’t be quite so feminine. The previous time I had visited her I forgot to cut them and even remove the clear varnish, and I could tell that she was staring at them. I hate this double life and after her revelations about her anti-trans and gay campaigning, I don’t think I’ll be seeing her so much.

Let’s pause here for now and I’ll tell you about Prague in the next post in a few days as that’s more significant, especially as I went with a trans friend.