As a trans woman, I obviously root for the women's team that's increasingly succeeding in a world previously dominated by men. I like to be part of that team, despite the bizarre aggression of certain feminists who, instead of concentrating their complaints on the predatory men who are their real bugbear, choose the easy route of finding a weaker group like trans women and taking it out on them. Most transwomen are against predatory, aggressive males, too. We never could deal with this overmasculinised world and are only too glad to embrace our femininity. We've seen the world the alpha male has made and, frankly, it could do with considerable improvement. Time for the ladies to make their mark.

A few weeks ago the Nobel prizes were announced and several women received these prestigious awards, some in their own right and not as part of male-dominated teams so prevalent in science. The Nobel Prize in Chemistry went to Emmanuelle Charpentier and Jennifer Doudna for their work on gene editing. Andrea Ghez was one of the winners of the Physics Prize for her work on black holes. And the prize for literature - a prize field surprisingly dominated by male authors (101 out of 117 winners are men) - went to American poet Louise Glück (I've not read her yet but will do so). It's pleasing to see that women are being recognised in areas that have been so dominated by men.

Of course, honourable mention for women at the top goes to Kamala Harris for becoming the US's first female VP elect. And I'm pleased to hear the US now has a transgender senator. 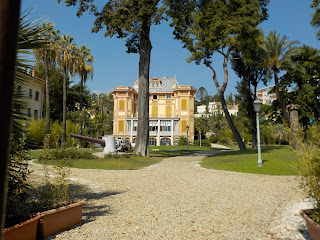 Talking of Nobel, here's a picture of Villa Nobel in Sanremo, Italy, where Alfred Nobel spent the later years of his life. There's a lab in the basement where he conducted experiments on explosives. The big gun in the garden was used to test them by firing out to sea, much to the discomfort of local fishermen. Legend has it that he created the Nobel Peace Prize to counter the murderous uses to which his mining explosives were being put, but I suspect it was the locals who pressured this maniac into considering a bit of peace for once!

It does illustrate, though, that men do tend to like the aggressive exploitation of the world. As we face up (or ought to face up) to the fact that we have been trashing our planet, I do think that a different approach from that of the alpha male of our apish species is very necessary. I'm not suggesting that positive discrimination is the approach; that would be wrong and can disguise underachievement. But it is good to see that women's contribution is being recognised, that women are reaching the top.

To people who think that the transgender spectrum is a modern phenomenon, I always talk about trans people and culture of the past. Going to the very far past, legendary times even, I'd point out how Hercules, the epitome of Greek and Roman masculinity, was forced to serve Omphale, Queen of Lydia. This was especially degrading from the point of view of Hercules' own high social status. Initially Hercules suffered forced feminisation as a maid (which, of course, is a subculture within the trans spectrum). Early accounts suggest that Hercules was genuinely humiliated by this; later ones suggest he delighted in gender reversal with the queen after she freed and married him. And Hercules' appreciation of his feminine side and subsequent desire to dress seems to have remained in later adventures according to some writers. So there you have it, even the most macho of men may actually have a preference for something less hulkingly male. I have always felt that a lot of macho culture was really just a desperate, consuming attempt to deny something preferable, easier even.

Email ThisBlogThis!Share to TwitterShare to FacebookShare to Pinterest
Labels: Being trans, feminism