Lockdown is time to play

Well, pretty much everyone had hoped that the drastic measures in the spring were going to be enough to reduce the effects of a second wave of coronavirus ... and everyone was wrong. So as we prepare for a very difficult winter I'll link back to the suggestions I made in the spring for practical survival when in isolation. I myself am used to being alone at home because of the nature of my work but it will feel odd to many.

Life in Italy in the age of the virus

How to survive isolation at home

One point I made then was that you could use down time at home to invent a board game. I was reminded of this by an article in yesterday's paper that described a number of board games issued recently that are set in the local area, including one where gangs of pigs in a post-apocalyptic future have taken over Genoa and fight for city blocks, another where of teams of bears fight off monster babies who are devouring the world, or just Monopoly but played in much smaller towns than New York or London. They all sound fun and remind me of the days before the Internet when our family would get together to play just these sorts of games. Now, the Internet is great but there's something missing in life when the family are too busy each with their own phones to interact together, which is always the best bit of playing games with physical pieces.

My grandfather was a great artist and created some amazing board games, including two painted on layers of acetate that were stacked and could be moved about to change the layout or scenario. One was an adventure game where you chose a route to the treasure cave but might (or might not, depending on the shifting configuration) encounter quicksand, lava, crocodiles, cannibals and any other hazards. The other was a driving game where the road conditions changed at every turn. Never select 70mph if there's any chance of pedestrians on the crossing, heavy traffic, a train on the level crossing and so on. Avoiding traffic jams by a shortcut down country lanes might work ... or the bull might be loose or the ford flooded. And never ever run into the back of a police car, the one that's just materialised in front of you! We loved that one.

I remember my father teaching me how to play draughts (checkers) by candlelight during the 1970s energy crises when we had endless power cuts. (We survived that crisis time as we will this one.)

I recall how we used to invent games at school - not just outdoor ones involving tennis balls and odd-shaped corners of the playground, with hymn books as bats and school bags as traps - but ones where you actually had to make a board and cards and find something to act as counters. We did our own local Monopoly, too, with the innovation that some cards were demolition orders, not just on shabby houses and dodgy hotels but on entire streets. It seemed appropriate for the area near the school! And a card game involving an alien invasion - the inventor had a lot of fun drawing weird extraterrestrials. I'm sure they weren't modelled on our teachers really!

A few years ago another TGirl and I thought of a card game where the TGirl has to get ready for the club, get her outfit and accessories together and avoid hazards like blunt razors and laddered tights. Perhaps there's a limited market for that one.

There's nothing like working with your hands and being creative and I do worry that we are losing a love of making stuff because our entertainments come ready packaged. I'm not criticising video games or online stuff as a lot is undoubtedly great fun but the point is that when you only play those you don't get to be inventive yourself and you get more isolated, which is hardly what we want right now.

Get out the old board games or make your own. Your Neighbourhood Monopoly is just waiting to be created, and don't forget those demolition orders - the Smiths' garden shed at no. 34 has got to go!

Another photo from ten years ago, this one in Manchester with Lee Middlehurst who interviewed me as part of her PhD research on transgender matters. Later we met several friends for dinner at the Eden Bar on the canal and joined the weekly Concord meeting. 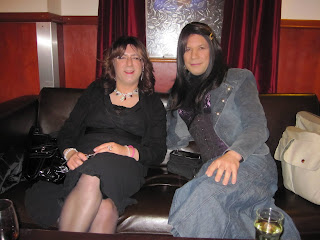 Email ThisBlogThis!Share to TwitterShare to FacebookShare to Pinterest
Labels: Creativity