The joy of sox, or hosiery tips and treats 3: fashion and style

What's trending? The all-important question that's been essential knowledge in any society. I suspect the way a caveman wore his sabre-tooth tigerskin coat said a lot about his status and style even back then. If you're not on trend, you get excluded and, certainly in the past, social exclusion from the court, tribe, city or state could be serious.

Thankfully, things are not so drastic now but knowing what's 'in' helps the TGirl about town lead her life without sticking out as a fashion oddity. Although it's fine to stick out if you want to. This season's colours, cut, shoes and hairstyle need noting, even if you don't like them, and the same is true for hosiery.

I've always followed fashion, especially in shoes and hosiery, as much as I could, and I've noted the changing fashions since I was little. Stockings gave way to pantyhose/tights in the 1960s, largely as a result of the miniskirt requiring a concession to modesty in not showing stocking tops and suspenders off in public. But this and the culture of the time also gave rise to playful, colourful, imaginative pantyhose (groovy, baby!). The early '70s, I recall, were dominated by the notorious "American tan" shade that was ... well, it doesn't really exist any more and some things are for the best!

The later '70s saw the re-emergence of black sheers and around 1980 the colour "champagne" (creamy white) became hugely popular, to be followed around 1982 by ribbed opaques (ideal with your slouch boots).

Legwarmers of that era have rightly been consigned to the laundry basket of history! I'm fearful that pixie boots will make another comeback! ...I'm digressing.

It was in the mid-'80s that new, more dynamic hosiery knitting machines were invented and elastane (Lycra) became an almost staple component of hosiery. The latter created sheen, stretch and flexibility; the former led to an explosion of new patterns and styles, with a boost given by Princess Di who was a hosiery aficionada.

As a result, coloured lace (with microskirts) became a big thing around 1986-7, spot tights in 1987-8 (with a baggy purple sweater) or zigzags, and cute repeating print patterns in 1988-9, all thanks to the new weave technology. Fishnets - and more subtle micronets - ceased to be the preserve of showgirls but became smart, mainstream items. Tartan, diamond and other repeating patterns, big prints and suchlike enabled women to make a statement. The recession of the early '90s put paid to all this fun, and black opaques and leggings replaced the groovy, the funky and the bodacious of the '60s, '70s and '80s. Boo! As the '90s progressed there were some tentative returns to colour and patterns, notably chocolate around 1997.*

In the last twenty years there has been such a huge choice of quality hosiery. Yes, there are sudden fashions, like the revival of pastel coloured opaques around 2007, which had me buying turquoise and even avocado, which was everywhere for just a few weeks. Like a '70s bathroom suite, it had no long-term appeal. I wonder why?!

At present, women wear trousers (in the widest sense - see my post One Tube or Two). Current fashion is very much for leather and PVC trousers and leggings; everyday wear is leggings (plain or sporty), jeans or just trousers. There's less scope for displaying hosiery, which is a pity given its versatility. But don't turn your nose up at knee-highs (pop sox) or pretty ankle socks. I know they're not exactly the sexy stockings so beloved of that trans community, but they are ideal with jeans and trousers. 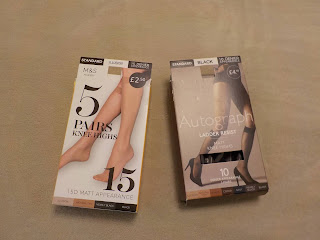 In my last post I felt that everyone should have staples in their sock drawer such as natural and black sheers, and black opaques. But when fashion focuses on hosiery I like to buy what's in, even if it has a short life on the catwalk or street. The great colour wheels of 40, 50 or even more shades don't seem to be a thing any more. When they were, such as in the Noughties, I bought every shade of pink (ballerina through to purple) in Aristoc's line. Yes, I did wear them occasionally, such as with a pink ballerina-style dress to a party. Purple was popular for longer, especially in opaque styles. I hear good things about Snag hosiery, ideal for the larger or taller girl - TGirls take note -, and they have a range of bright colours, and also bodyfree/suspender pantyhose that I praised in my last post and which they call "mock garter" (link: Snag site).

Lace pantyhose come back into fashion from time to time, too, and here are three of mine from Jonathan Aston, but in different patterns and colours: "sweet roses" in white, "belgravia" in dusky raspberry and "fleur" in black. Quality and attractiveness that feel heavenly. You really know you're wearing these. 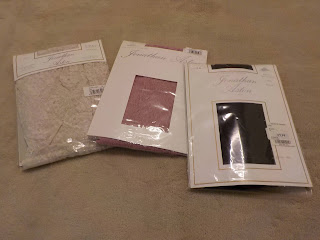 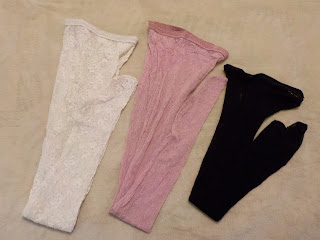 I said above that fishnets are mainstrean hosiery now and as well as the classic black you can get them in a number of other shades. Here's me in pale apricot fishnets (best click on the image to expand to see they are nets):

The way they expand over my legs so as to reveal and work with the natural colour of my skin creates an ideal match here with my pale peach-yellow dress and cream shoes and bag. Fishnets in natural skin shades can work wonders with giving you a smooth, smart legs with a bit of sheen that works with your skin tone, so they are better in some contexts than sheers which impose a tone on you. Ideal if your legs are waxed and so have a natural sheen.

Whalenets were a thing a decade or so ago but they need careful consideration to avoid pasty white skin clashing with and oozing around thin black net, not to mention the troubles of getting them on and off. My solution is layering with natural sheers but rather than go into this complex topic now I'll save it for my next post, about mixing and matching.

Of course, party time is when snazzy hosiery comes into its own. Just a few of mine: cityscape (London Skyline from M&S, very 2012), sparkly fishnets (Falke), blue neon (M&S) and spider web (market stall, no label, with similar gloves): 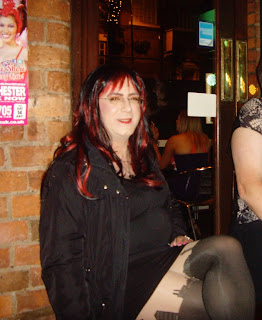 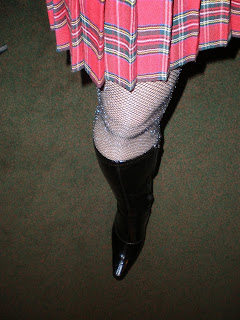 Next time: choosing, matching, layering and how to style your legwear for best effect.

* Lynn, see my reply to your comment/query on my last post about chocolate sheers.

Here's a link to a post from 2012 that I wrote about a favourite hosiery site, MyTights, that no longer exists as it has been taken over by UK Tights (site: https://www.uktights.com/). I loved MyTights and bought a lot from them over many years. Although I've not used UK Tights, I hope they are still providing the same quality service, good advice and trans friendly help that their predecessor did.

As well as describing my inadvertent discovery of their offices, I also state in that post that "one day I'll post about my hosiery collection". Now just because November 2012 was a long time ago, don't say I haven't fulfilled my promise by May 2021!