I hope you have had a good weekend. And that your presents included something pretty. The best thing in my Christmas stocking was, as ever, my leg. I have always set time aside in the holiday season for looking pretty.

I made the mistake of standing on the scales this morning. Oops! Well, Christmas comes but once a year ... which maybe is just as well!

I was supposed to be joining friends in France today but that plan had to be abandoned because the latest surge in Covid has closed the French border to them. So instead I've got a week of pottering about at home and prolonging this lovely dressing time. I might even take some photos as, so far, this Christmas season has been a great opportunity to be dressed nicely all day every day.

Despite its being the season of goodwill the trans community still gets fired at by the usual snipers. But this meme doing the rounds did make me chuckle: 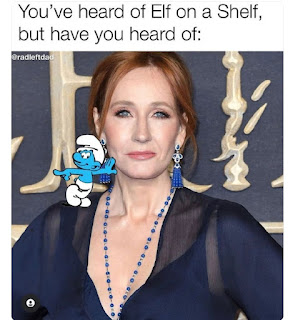 But for every attacker, I always find several supportive allies. Desmond Tutu, archbishop in South Africa who won the Nobel Peace Prize in 1984, and who died yesterday, had this to say about religion and its anti-LGBT stance:-

“I would not worship a God who is homophobic and that is how deeply I feel about this. I would refuse to go to a homophobic heaven. No, I would say sorry, I mean I would much rather go to the other place.”

And there was a nice, specifically trans-supportive message by Olympic gold-medallist Tom Daley in the annual Alternative Christmas Broadcast on Channel 4 in the UK, "There is no LGB without the T":

I've never been much of an enthusiast for the Western notion of "the great man" or woman but, that being the way it works, when celebrities and known people come out in support, I think it makes a difference.

I suspect most of my readers will still be on holiday so I wish you a restful time.

Also, thank you for your comments on this blog. There's still a technical problem and I haven't yet been able to reply to some of them, but I have read them all and thank you for them.