I spent almost a week away - originally I had planned three days. After two Covid-ruled years that have kept us so much in isolation, I was pretty desperate for company and although I am used to working for myself, and therefore to a degree of solitude, there was always plenty of social time in the evenings and at weekends before Covid came.

Although the person I stayed with is unwell and has the oddest lifestyle - sleeping much of the day and running about very actively at night, cooking burgers at 4 in the morning or eating breakfast cereal mid-afternoon - it was vital for me now to have someone to talk to, share (odd) meals with, watch TV with, and feel connection with. The stuff we normally take for granted.

I am now fully dosed up on vaccine and have my Super Green Pass which is the European Union's passport in these Covid times. It lasts nine months across the European Union, but only six nationally. Go figure! By February 1st you will need it to do anything or go anywhere in Italy. The unvaccinated will be fined and will be able to buy food, newspapers and medicines and that's all. The crackdown on no-vaxers is pretty draconian. 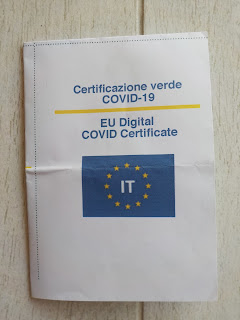 I hope to get out more now as I miss the cultural events and sightseeing and socialising I used to do. I have a friend in Florence and will try to visit her as soon as the latest situation has settled down. At Easter I may even get to see the friends in France I missed at Christmas when the French closed their borders.

I am happy to be vaccinated but I am troubled by the loss of liberty that carrying certification results in, even though it's meant to be temporary. I was hoping to start going out as Sue again, especially as there is a big Pride event planned locally for April, but having to show certification literally anywhere indoors is a worry as, of course, all my ID and certification documents are in my official name. My actual national ID card has a photo and an 'M' marker, neither of which correspond to my feminine appearance. The Green Pass has no gender indicators and my name is foreign here so it may not be a problem. But I don't trust some cop or official not to be a jerk about a TGirl in town apparently not being what is on her documents. There are false certificates about and the authorities are dealing with those severely. I guess it's time to get in touch with the (thankfully quite vocal) local LGBT group here for advice, support and, if need be, protection against prejudice.

People who aren't transgender have no clue about the stuff we have to ponder and worry about and negotiate.

It's anniversary time again. That first trip out back in 2010 to the Angels Party at Pink Punters. I wrote about it on the tenth anniversary in 2020 but forgot that I'd written about it on the third anniversary, too. Yes, the event is indelibly stamped in my mind but I lose track of the hundreds of posts I've written here!

In days gone by, young ladies of noble families, once they were of marriageable age, would be officially introduced to their sovereign and to high society and be known as débutantes (or just debs), a special occasion for them. This was my deb ball!

Email ThisBlogThis!Share to TwitterShare to FacebookShare to Pinterest
Labels: Being trans, Personal news