We make up for the times we lost

Much trans culture is in nightclubs and bars, whether LGBT-dedicated or not. But so many trans people who go out late are twice the age of most of the clientele. There's nothing wrong with that, of course, but as a general observation, clubbing is for the young, often to meet potential mates and burn energy.

I sometimes chuckle at myself, decidedly middle-aged, along with my similarly-aged friends, throwing somewhat distorted shapes on the dance floor when it's way past our bedtime. Without intending to be mean, that may seem comical, but it has shades of tragedy, too. We are making right the fact that we weren't necessarily able to go out as young trans women or men because society in our day had expectations, we were less sure of our ground and, most tragically of all, our late teens and early twenties often see us looking to find a mate and be the person we are told we are, so we suppress out trans nature accordingly. We end up actually missing out on life lived in the right order and later, when we realise that we can no longer fight the reality that we have been transgender all along, we redo the socialising in young persons' venues that we missed out on since we weren't really being ourselves the first time round. That's how it's felt for me, at least.

I'm glad that younger trans people seem to be having a slightly less difficult time in coming out now and living life more authentically from the start. 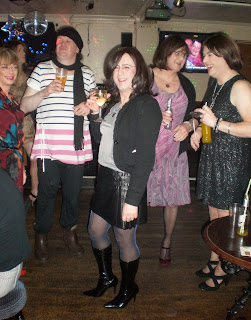 I lost 3.7 kg or 8½ pounds in January and I'm slimmer than I've been for some years. Admittedly, some of that was weight I'd put back on over the Christmas fortnight but I can see myself being back in my healthy weight range later this year.

Like many people, I joined a gym at New Year but I've only just plucked up the courage to turn up. Actually, I think I might get to like it there. There was this amazing looking machine that really caught my eye and I asked the instructor if he could show me how it worked. He was so helpful. "It's easy," he said, "you select a setting, put a coin in the slot here, and a snack pops out the bottom."

I'm still slowly but surely getting together all my old photos and here's another I'd forgotten, from 2008. I was still experimenting with my look. 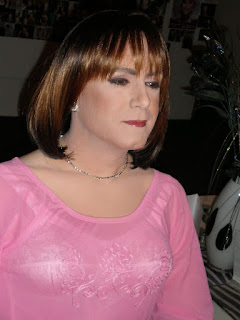 Email ThisBlogThis!Share to TwitterShare to FacebookShare to Pinterest
Labels: Being trans, Slimming