An apology to readers

I am very much aware that my posts have become angrier of late and I am sorry about that. The days of bubbling contentment when I started this blog seem very distant, I know. But these last five years have seen  much pressure on me personally, and also on the trans community from bigots and bullies in all forms, from religious fanatics to exclusionary feminists, our small group singled out following the rise corrupt, populist politicians, so many of whom have been funded and supported in one way and another by Putin, who epitomises the sickness of the brutish, domineering, exploitative masculinity that lies behind so much of the world's ills.

I feel so small fighting all this harm. I get frustrated and upset and angry. It shows. I'm sorry.

This week at least I feel something can be done, that the tide might be turning with the chain of events there has been. The world has united against Putin in spectacular fashion and the rottenness of his way of influencing the world is being dealt with remarkably fast, in my view. With so much to depress me before, I now feel galvanised into action. Here's how.

When I was three weeks old I became a refugee. When the situation is clearer I will be offering my spare room. I hope it will never be necessary but I am here if needed. There is a refugee centre near here but it is currently full of Afghans who have had to flee another repressive regime.

The Ukrainian community here has been quick to respond with minibusloads of essentials headed towards Eastern Europe. Locals are contributing basic foodstuffs, over-the-counter medicines, sleeping bags, blankets, etc. Things you may not have thought of include hand cream (for soldiers who can't use weapons with gloves but whose hands get chapped in the freezing conditions), soft toys for children, and, since Covid is ongoing, facemasks, handgel and single-use gloves.

I was brought up in the Cold War and Putin's rhetoric has taken me right back to the tensions of the '80s. I have therefore been educating my nephews on how nuclear standoff works so as to reduce any worries they may have.

I have shares in a company that invested in Siberia. I was about to contact them to ask them to pull out but they are ahead of me.

There have been pro-Ukraine demonstrations even in the town where I live and Russian residents have spoken out against Putin's actions. The Russian orthodox church, a pretty building and a bit of a local landmark, seems to have switched allegiance to Ukraine. There will likely be another demo this weekend.

The Red Cross has bigger infrastructure than my local initiative so my contribution to them may be more effective. The United Nations High Commissioner for Refugees (UNHCR) also seeks donations. The same for other charities and organisations on the ground such as Save the Children, Médecins sans Frontières, etc. who all have specific Ukraine funds (not forgetting the many other wretched places on earth). Do make sure that any initiatives and charities you help are genuine - fraudsters take advantage of situations like this.

I think it imperative, as a Westerner and as a human being, to defeat Putin. But above all I think so as a trans person. A world run along his autocratic, violent lines is not one I will be able to live in. We have seen Putin's friend Trump take a repressive stance against trans people in the USA. The dim, dark corners of Putin's empire have seen LGBT people tortured. Even without that, there are no LGBT rights worth speaking of in Russia and its satellites.

So I'm sorry I am angry these days. But maybe you can understand why. I'm trying to channel it in a way that might make a difference. 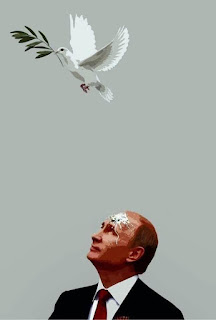