I had a lovely sprig of mimosa for International Women's Day earlier this week, which is the traditional gift where I live. It's cheerful yellow fluffballs were so pretty and a nice feminine tonic in the midst of the macho warmongering of the week. 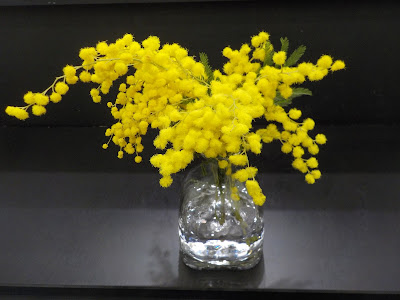 As I've said before, being trans, being a woman, is not just about the clothes. It's everything. I like nail varnish and chick lit and cute things. I am not quite so worried as I was a fortnight ago about this war as there is a sudden sense of purpose in the rest of the world and suitable action being taken, but I know that the next few weeks and months are going to be horrific to hear about. Confirmation bias is largely contributing to this Western sense that the Ukrainians are the plucky underdog who will defeat the bully based on their early successes, but those of us who've worked in international affairs know that the Russian war machine has always been incompetent, yes, but also big and brutal.

So I bought a soft toy, just something to look friendly and for cuddling if need be. OK, so Raimonda the Ray here also matches the cushions (that's not coincidence!) but she's for comfort, too. 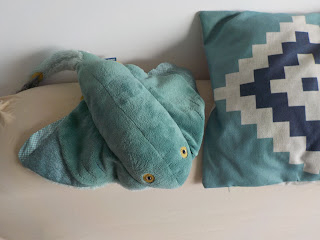 I wonder if, like Morgan Freeman seeing Black History Month as ridiculous, I don't perhaps see International Women's Day as a sop to women from the men who actually run the world. Look at this body language from everyone's favourite tyrant last week. Putin keeping aloof from his generals and advisors, like a Renaissance prince, but sitting within cuddling distance of pretty air hostesses. 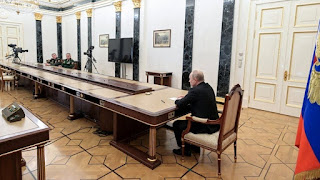 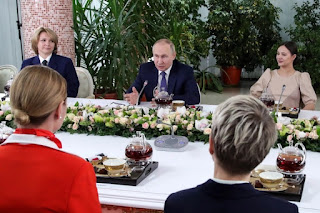 This is macho culture writ large and I hate it. We know what a world run by men is like: horrible. It's not the body or the clothes that really make a woman but outlook and attitudes and behaviours.

And Raimonda thinks so, too.