I am pleased to hear that Vietnam, one of the world's most populous countries, has declared that being gay or trans is not an illness, that LGBT people cannot be 'cured' and should be treated with respect. The Far East, South East Asia, the Pacific and, to a degree, South Asia, have generally been much more LGBT tolerant - for centuries - than the West. There's no harm in having a statement in writing from official sources, though, is there?

It's a pity that the gains in official tolerance in a number of Western nations has diminished in recent years, although I remain convinced that the public support us. And a child's sweet gesture at Manchester Pride in England yesterday is very heartwarming.

I'm sad to say that the Scooter Café in London's Lower Marsh just behind Waterloo Station has closed after 22 years. It's such a shame as it was a quirky, bohemian place with lovely coffee and cakes, interesting cocktails and beers, and hot chocolate that was more like a pudding than a drink. The small back yard was an oasis of quiet and greenery in a busy city. And the pussy cats were cute. Naturally, TGirls were as warmly welcomed as any other customers. I shall miss it. 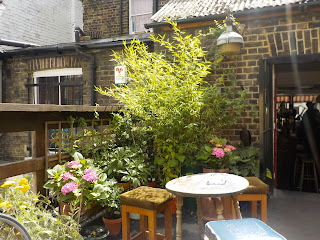 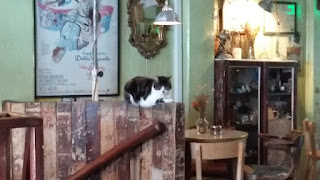 I'm pleased to say that I've seen the gecko who lost his tail on a couple of other evenings since I last wrote. One time he was happily hoovering up little ants. The other time he was sitting on the wall. So it looks like he is here to stay, like Laura the Lizard. Maybe he's forgiven me my clumsiness.

I have researched Laura a bit and she is a typical Mediterranean wall lizard, but she has a more silver-green skin than is usual, and is almost certainly female. Although we don't insist too much on gender certainties here!

As for the gecko, at the moment I'm designating him male and I'm going to give him a name. By analogy with a former colleague's pet rabbit who had a disagreement with a lawnmower when young, lost his ears in the fight and was known ever after as Lugless Douglas, I propose to call my gecko who shed his tail Norbert Shortbutt. But reader suggestions are very welcome.