First outing of the year

At last, my first outing of the year! I've been largely stuck indoors since New Year with boring work stuff.
I had a lazy morning and didn’t get out of the house till midday so went straight to Bistro 1 in Frith Street (Soho) which is my favourite place to have lunch. It's excellent value, has a varied menu, quick yet unhurried and the staff always treat me very nicely. The ladies is very nice, too. http://bistro1.co.uk/london-restaurants/frith-street-soho/
[Update 4/1/21 - the site is now Bistro 1]
Then I went to the Sales to look for any bargains that might still be left. Had time only for Debenhams in Oxford Street in the end but I managed to find a Yumi little black dress for £10 (reduced from £30) and a black and red pleat skirt for £8.50 (down from £28). The latter is designed for sashaying, oh yes! Quite pleased with that. I made the mistake of wearing a fairly new pair of boots so my feet were beginning to ache and I decided not to go any further.
Fortunately it was time to meet my friend Joanne at the Porcupine pub near Leicester Square tube. I hadn't seen her for over a month so we had a lot of catching up to do over a tasty glass of rosé. http://www.nicholsonspubs.co.uk/theporcupineleicestersquarelondon/.
Although it was only 4.45 we went to Le Garrick in Garrick Street (Covent Garden) for an early dinner. http://www.frenchrestaurantlondon.co.uk/. I had assorted cold meats, which I love. They were tasty enough but fairly pricey at £8.25. Then a cassoulet (bean, duck, pork and sausage) which was OK but a bit overdone, I felt. Joanne said her steak was good. But then there was a fabulous fondant au chocolat for dessert. I know my chocolate puds and this was outstanding. The bordeaux was not bad. At £45 a head I felt this was perhaps too much, though. Still, it's a popular place with live music (Brazilian!) in the basement level and polite, attentive service.
We decided to go and see a film and, after walking through Seven Dials with its lovely winter lights, 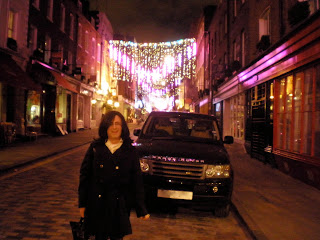 settled on the the gentle, funny and beautiful A Week with Marilyn, starring the cream of British acting talent. Michelle Williams, who played Marilyn, was lovely and captivating and caught Marilyn's style and demeanour so well. The best line was: “Trying to teach Marilyn to act is like trying to teach Urdu to a badger.” A delightful film, just right for digesting dinner to!
We had thought of going to Trannyshack but felt that it was so out of keeping with the gentle evening we'd had that it was best to have a quick nightcap and head home. The Cambridge pub, as ever, supplied our nightcapping needs.
What a nice day! Just what was needed at this point in a grey January.
Sue x
Posted by Sue Richmond at 23:28

Email ThisBlogThis!Share to TwitterShare to FacebookShare to Pinterest
Labels: Out and about