In my last post I described how, ten years ago, I felt not only the need to live as a woman in the real world but experienced hormonal changes that felt in some ways like a second puberty. I began to wonder if physical transition was inevitable.

Although the medical, social and legal processes involved in transitioning were clear enough, there is a difference between theory and practice. Socially it would not be impossible, especially as I was on the point of working for myself at home, although I was concerned about my family. Although I am more than old enough to distance myself from my family of militant fundamentalists, and have largely done so, the word militant is important as it is unlikely that they would leave me to transition in peace. Several trans women in similar situations as myself have had no end of harassment from fanatically religious relatives who cannot permit the 'abomination' of transgenderism to pass unmolested. One girl I knew even had to get the courts to force her parents to desist. So that was going to be a problem for me, but one to be faced if necessary.

The official recognition of transition was also a concern as it is a pretty long drawn out and distressing process. There have been some improvements in the last ten years but it is a serious decision to change name and status for every future interaction. I agree that, since it is a major decision, a little official resistance is needed to challenge any whimsical notions, but still one had to live full-time in one's true gender for at least two years before one could get a Gender Recognition Certificate to change one's status legally. My mind is a little hazy on the rules ten years ago as there have been changes since, but that two-year period started with your doctor referring you to a gender clinic.

Did I want to talk to my doctor? Did I want to go to a gender clinic? No hormones or other assistance would be available until after the clinic had taken charge of me, a referral process that usually took months, and often a year or more. And you were expected to be living full-time female. This is the problem with a lot of gender care in national health services: it's an all or nothing situation. Either you are committed to living a new life and being pushed towards gender surgery, or there's nothing for you. The overwhelming majority of trans people fall into the latter camp and get nothing. It varies between countries and there are slow improvements across the board but that's basically the choice I had ten years ago.

I am not one to rush into things and I like to be as informed as possible. So I decided to visit the gender clinic at Charing Cross Hospital in West London, not initially as a patient but as a visitor. I would arrange to meet up with girls after their appointments or accompany them there and chat to the staff or other patients or their relatives in the waiting room. The whole frustrating process became clearer as a result of these discussions, and from online forums, from (rather basic) clinic literature, and even from once gatecrashing a voice therapy class (the voice coach allowed me in).

Two things became clear. Although I was already making new trans friends, it struck me, first, that getting to know as many trans women as possible would broaden not only my knowledge base but also increase my social circle, which was going to be vital if family and friends turned against me. And, second, that it would be a good idea to try living full-time to see what that really entails. Believe me, that prospect seemed wonderful, but I try to keep my feet on the ground and wanted to discover what pitfalls there might be before they arose once I was committed.

So from autumn 2010 to spring 2012 I pursued a policy of doing as much trans stuff as I could and meeting as many other trans folk as possible. There are regular events like Leeds First Friday, Sparkle, Girls' Big Night Out and more at many venues and I started to organise meet-ups in London, mainly via the UK Angels forum, and invite girls to my home for makeovers. There were indeed many periods of weeks at a stretch when I lived as a woman. It was bliss, the best time of my life.

And I continued to consult girls about clinical transition, how it was working out for them, what problems they were experiencing. It began to strike me - as it did a number of girls undergoing treatment after a point - that surgical transition was not for me. I don't feel I have the wrong body. Being born fully female would have been better, but somehow turning my genitals inside out was not an answer to my own needs.

It also became clear that a considerable number of transsexuals going to the gender clinic had underlying mental health or behavioural disorders, some formally diagnosed and some evidently not but that could and should have been; and it continues to trouble me greatly that, instead of caring primarily for those overarching characteristics like autism or bipolar disorder which have a major bearing upon social interaction and self-perception, and therefore on gender dysphoria and body dysmorphia, the transgenderism appeared to be dealt with largely as an issue of solving the dysmorphia to alleviate the excesses of distress that are more the hallmarks of certain neurological and mental conditions rather than a product of being trans. Surgery is a dramatic solution, and I feel that surgery at Charing Cross leaves a lot to be desired (as I have complained of many times in this blog, e.g. So you still want that gender surgery?). The emphasis on it also leaves most trans people out of the system. And pressurises others into transitioning fully who may have benefited better from a gentler approach. It is, however, a characteristic of the Western medical approach to bombard symptoms with drugs or surgery till they go away rather than adopting a more holistic approach, something that would respond so much better to transgender needs. In many ways, it is not so much medical intervention that most trans people need but a safe environment to exist in. These are huge topics which I may go into another day, but I found it all quite offputting.

What finally put paid to my consideration of formal transition was an eruption of trans-on-trans violence and abuse mainly in early 2012 that changed my whole relationship with the trans community and I have been opposed to the strictures of many self-appointed activists and influencers since. I wrote some quite distressed posts here in 2012 about this. Again, a major topic, perhaps for expansion another time.

So I did my homework, and found in the end that formal transition wasn't for me. Not a fail, but a success in finding out what suited me.

But what about living full-time, and maximising my trans friends and social life, and coming out? These are topics I will cover next and will involve a lot of fun.

Here's a foretaste of posts to come, then: a visit to Manchester in October 2010 to take part in an academic study, meet new friends and old, and attend a local group. Here's us having dinner together. 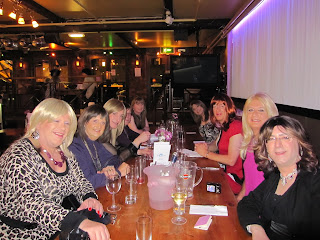 Email ThisBlogThis!Share to TwitterShare to FacebookShare to Pinterest
Labels: Being trans, Surgery, Transition