In the last three weeks I have been looking back at the period a decade ago when my life as a woman in the real world was getting under way. It was the most wonderful time, living the life I felt I had been born to lead.

It's an old trans cliché that your first steps outdoors as a TGirl are midnight trips to the postbox, in the hope that no-one will spot you in the depths of the night. The irony is that you actually stand out immediately in an otherwise empty street. But the best way to exist as a transwoman struck me one evening in this period of my life. It was at 6pm one Friday, when my friend Emma and I found ourselves in London's Piccadilly Circus, one of those locations in the world like Times Square or Shibuya Crossing that is synonymous with traffic and bustle. You could have lifted your feet off the ground and been swept along by the crowds that evening. And of all the thousands of people there, not one was paying us two TGirls the slightest bit of attention as they all hurried on with their own lives. It was a revelation that full immersion in life and society is actually the best way to blend in and avoid undue notice. This added to my confidence no end. Certainly, in most big cities with all their variety, you can just get on with life on your terms. I wish I had understood that ten years earlier.

You can read about my subsequent adventures as a woman about town from August 2011 onwards in this blog. I thought this series of posts would just fill in the gap between first going out in January 2010 and the start of blogging.

Finally, this series has received a lot of views and I have received quite a lot of comments, not just here in the comments section but elsewhere online with links to my blog. So far, a lot of interest has been generated by post no 2 (contemplating transition), especially my thoughts on mental health, and post no 4 (coming out to lovers), especially how trans life gets suppressed when we find a partner, so I will expand on those topics in future posts. Just scroll down to find these and the other posts in the series.

No photo was ever taken in that chaos of Piccadilly Circus I described above, but here I am with Emma in the heart of London in April 2011, with Big Ben in the background. Both of us were a lot more confident by now than we were on our first extraordinary night out in London ten months earlier (My baptism of fire). 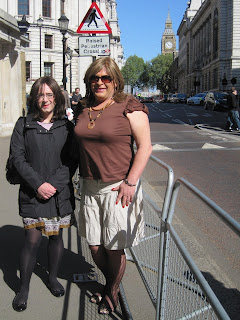 Email ThisBlogThis!Share to TwitterShare to FacebookShare to Pinterest
Labels: Being trans, Out and about, Social conformity