The joy of sox, or hosiery tips and treats 2: tights/pantyhose

I'm continuing this series on my favourite clothing items, hosiery, by looking specifically at tights or pantyhose.

For the purposes of this post I will call these garments pantyhose. The word tights describes many articles of clothing over the centuries usually for men, whereas I'm describing the modern legwear for women. Pantyhose, (i.e. stockings with attached panty) cannot be confused with these:


As for modern days sports tights for men, well they aren't part of this picture either.

I guess I have always liked pantyhose for three reasons. The light material and clear emphasis on the female market always made them seem ultra-feminine to me, and that's often the emphasis when you're trans (hence the whole miniskirt and killer heels look so beloved of many MtF trans people). The other reasons were that they were cheap - within pocket money range - when I first started buying as a kid, and that they could easily be hidden since they fold up into a tiny ball that can be secreted into small hidey-holes. My secret feminine world in a matchbox! Nowadays, I appreciate them for their warmth and comfort and the smooth, smart look they give my legs.

My last post about stockings gave some comparisons in terms of practicality. Generally I find pantyhose easier to put on and take off and they stay in place better. But that doesn't mean they don't have their own annoyances, such as slipping down, wrinkling at joints, having less uniform appearance and - my bugbear - not going on straight. I can feel a twisted pantyhose leg on my thigh and nothing irritates me more!

Sizing stockings, especially fully-fitted ones, is important but pantyhose sizing is vital. Too small or too big and they really won't fit well. Unlike stockings where it's the leg measurements that count, with pantyhose you need to take account of height, hips and buttocks too, so you need to know your female measurements, and they aren't so easy to take yourself, which is a problem for those who aren't out yet. Online shopping and communication has revolutionised the world for trans people and made things very much easier, but that has been at the expense of face-to-face shopping at a trans retail specialist who would be able to take your measurements for you.

The other preference for pantyhose I have is that most stockings are sheer with a few opaque styles, whereas I have pantyhose ranging from gossamer-thin 5 denier to winter-warming 200 denier and a far vaster choice of colours, styles and patterns. Remember they are now 97% of the hosiery market, so manufacturers will stick with a few tried and tested types of stockings only rather than take a business risk in developing a fancy style only in stockings.

More detail on sizing and weight in a later post.

I myself have so many pairs of pantyhose, from cheap multipack sheers and opaques from supermarkets to expensive (and more fitted) single items from quality suppliers like Wolford, Tabio, Elbeo and Calzedonia. And, of course, pantyhose for parties or special occasions. 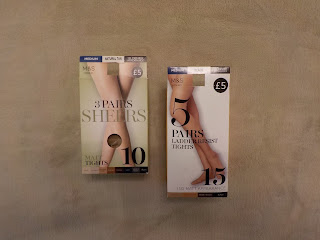 My two photos above show, firstly, cheap multipacks of sheer pantyhose, from Marks & Spencer (M&S), that are perfectly acceptable for everyday use at home or outdoors and should be a staple in everyone's wardrobe. Normal knit 10 denier in tan and 15 denier ladder resist in black that are not so elegant with their complex weave but are more durable. Below them are two pairs of quality pantyhose I have had for a good 20 years, have been worn innumerable times and - incredibly - are still going strong with only slight pilling on the feet. Everyone should invest in quality, too, especially when it comes to opaques. These are Falke 70 denier black opaques and Aristoc diamond pattern tights both bought at Selfridges for about £12 and £8 around the year 2000. Best investment ever!

My next post will be about styles, patterns, colours, etc. But for now I'll also mention some variants on the standard pantyhose.

With a band between big toe and the others or just open, these are ideal with your summer sandals or open-toed shoes.

These were all the rage 10-15 years ago and are often sold as leggings, even though some of these leggings are lighter than pantyhose that's described as footless! So where footless pantyhose end is not where leggings begin!

These can be quite useful both for shaping your tum and helping with your tuck. They range from a bit thicker in the panty to a serious squeeze that can be pretty tough to get into. Some have such a high panty that you can hold it up with your bra! Though that's not a good idea if you are likely to be outside a long time and may need a comfort break. Obviously, some manufacturers like Spanx specialise in this sort of thing (link: Spanx shapewear hosiery), many other manufacturers have a shapewear range.

Support pantyhose that give extra support and lift to your legs are, in my opinion, really only for those to whom medical recommendations apply, or who actually spend much of their day on their feet. If neither apply, I wouldn't go for it as the feel on your legs is bulkier and the look is sometimes less attractive than ordinary pantyhose.

These were all the rage about ten years ago but are less common now. They are pantyhose with a pattern that resembles stockings and suspenders. The intention is for the suspender to show. It's a reasonable compromise between stockings and pantyhose. I like them: fun, fashionable, sexy. A good pair should be comfortable and feel much the same as wearing full pantyhose. The Charnos pair below with flat surface all through are wonderful, the M&S pair beneath with raised suspenders are not so good, despite costing more (not so stretchy and a bit scratchy).

Sometimes also called suspender pantyhose, these are stockings attached to a waistband by broad bands of material that leave the gusset and hips open. A compromise between pantyhose and stockings with suspenders, these are good for women who prefer or need an open panty area and are ideal for men, or for TGirls who like to 'underdress' when they cannot be fully femme, as they make going to the toilet very easy.

Not all manufacturers quite got the concept. Charnos, for instance, a very good brand in so many ways, never in my experience produced good bodyfree pantyhose, either in their bridal range with, for example, a lace waistband, lace suspenders attached and lace-top stockings, or their official bodyfree range that I confess has been the only pair of hosiery that I was actually unable to get on because of the overly fiddly bands from the waistband to the stocking. But a very cheap range from BHS department stores (now no more) were excellent and I invested in many packs and colours. 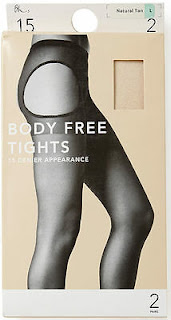 You can't go too wrong with pantyhose. If you are going to wear them with skimpy shorts, wear pantyhose with no visible panty band. Personally, I hate when the contrast between stocking and panty band shows below your shorts. Maybe it's just me. (Or cover your buttocks like your mother said you should!)

In 2006/7 when the film Factory Girl came out, Sienna Miller (who played Andy Warhol's muse Edie Sedgewick) adopted a Sixties style that only very few women (e.g. Jane Fonda), have ever been able to pull off, which is pantyhose apparently on their own (she actually had a leotard but it was very subtle). Lots of women then went around in nothing but tights (thankfully with panties on) and it was the ultimate fashion nightmare that ended pretty quickly when they realsied they looked awful. Leggings are not trousers and neither are tights. You need to cover that panty area.

I'll be giving tips in a later post about problems like runs and holes. But once you have a ladder or hole, change your pantyhose as soon as you can (unless you are a punk or in rebel style of some kind).

So having enthused about pantyhose, what is my all-time favourite pair?

That would have to be John Lewis glossy 15 denier run-resist in black, that came in packs of 3 at about £6 but were a fine, well-fitting, stylish, glossy yet incredibly durable pantyhose that have, alas! been discontinued, presumably because they sold one pack to every customer and she never needed to return for more! Damaging them took some doing - once I destroyed a pair but only after I had dropped a pyrex dish from the oven that shattered and cut my legs.

Here's a favourite photo that shows them off well.

They came in other shades: tan and barely black, but plain black have always been my favourites.

That wraps up my tour of pantyhose, the second 'leg' on my overview of hosiery. In subsequent posts I'll be looking at styles (colours, sheen, patterns, etc.) and combinations (e.g. layering), and then all the advice I can offer on sizing, weight, costs, care, good brands, online stores, reviews and so on. Yes, I love my hosiery!

Well, here's me in my old home, after one of the many dressing sessions I offered to other TGirls. Those winning pantyhose are here again. I think they make my legs look fabulous. 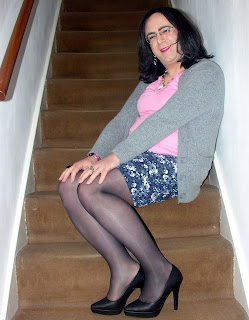