Day Trips in the Vax Era

Yesterday was a beautiful day and I decided to take a day trip to try to get used to the idea of shopping, travelling and eating out again - it seems like a lifetime ago that this was last possible. Armed with my post-vax Green Pass and my face mask, I went to Ventimiglia, the town on the Italian border with France.

I confess I felt odd doing something that once was so normal but has been difficult or even forbidden since early last year. Like I was treading new ground. You may feel the same about the strange way life is going on (or not) where you are.

Ventimiglia is a curious place. It's part ancient settlement (and I mean ancient: humans have lived in caves here for maybe half a million years), part border crossing with a large community of refugees and of migrants from former French colonies all trying to get to France, and part market town with a lively atmosphere. This year they've completed a  circular harbour 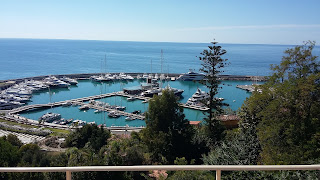 as well as erected a statue to the most famous Ventimiglian, the Black Corsair, "Lord of Ventimiglia", who is actually a fictional character from the works of Emilio Salgari, prolific Victorian writer of swashbuckling yarns that so influenced Hollywood. I can tell you that his novels are exhausting reading, being relentless adventure and action! 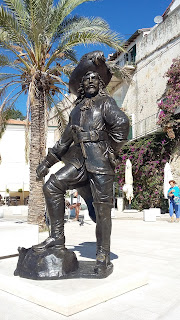 The old city is interesting with its steep, winding streets, city walls and gates, faded stucco and unusual churches. A very creepy experience was this church, the Oratory of the Black Confraternity, which is dedicated to funerals. The only light filters in through a single window, there is no seating, just a black and white (mainly black) floor and decoration in jet-black and bone-white marble. Skull motifs are everywhere, in the lace of the altar cloth, in the skull-and-crossbones reliefs on the base of the black altar columns, in the altar rail. Even the spindly coats of arms seem skeletal. The dead, crucified Christ has been taken down from the cross and is laid on a shimmering silk cloth in front of the altar. 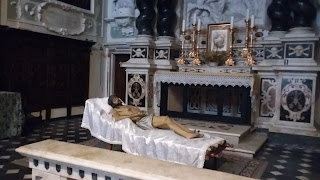 This is the one photo I took before getting out of this place. Zoinks, Scoob! Sure is creepy!

Back in the sunshine here's one more picture just to illustrate how the old town sits on a rocky crag overlooking the sea with heavy masonry shoring it up. 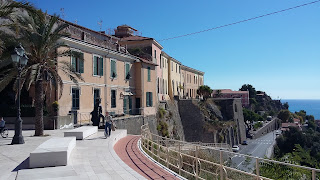 I didn't have time to visit the Roman remains such as the theatre, the Balzi Rossi caves where cavemen lived or the Hanbury botanic gardens, but there'll be other occasions for those.

It was good to do things that were once normal again.

Where shall I go next week, I wonder?

Last time I wrote about the Nottingham Invasion that has just celebrated 100 outings since it began. I have just come across this official photo from the Oceana nightclub there, which I remember them taking on my first trip to Nottingham but then forgot about.

And also this lovely group shot in the Queen of Clubs on my third trip. 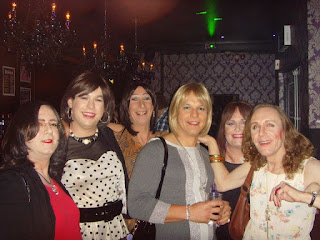 It's always fun to come across these old reminders of days out and about.