A bit of nostalgia. It was ten years ago that 30 or so trans girls acted as barmaids at the Olympia Exhibition Centre in London. We had been invited to man (if that's the right word) a new feature, the TGirl bar at the Erotica Show, an annual trade show. (Before anyone throws their hands up in horror at the thought that trans women might be associated with the sex trade, I'd point out that the Erotica show was just another trade fair and about as erotic as your grandad's undershorts. "Erotica" was just a marketing tool: I bought jewellery, jeggings and a hairclip there, but declined the cavity wall insulation and toffee-flavoured vodka also on offer!)

For us, it was an outreach opportunity, a chance to educate the public and show that we trans women are decent, approchable and friendly. 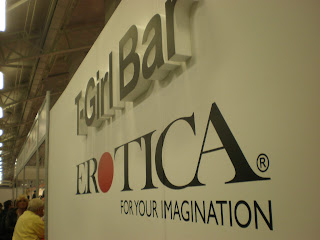 We were so popular that they unhesitatingly invited us back for the next show, in a different venue in 2013.

The 2011 show had us all dressed in plain outfits: white shirt, black skirt, just what any smart waitress or barmaid would wear. In 2013 we left uniformity and went a bit more fetish, but with a loss of charm in my opinion.

It was hard work. I had two girls to stay on each occasion, which is tiring even if fun, and the rota was serious. Pouring drinks for several hours whilst standing on very high heels takes stamina. But we were highly praised by managers and visitors alike and I think we got the message across that TGirls are personable, hardworking and, actually, very normal, sociable people. We answered visitors' questions about trans life and that's always good as those newly educated folks then pass the info on.

Altogether a success, in my view. It's a pity this event ended after that for financial and organisational reasons. But the trans community being promoted in London's top exhibition venues was an honour and a big win. I'm proud to have been part of it.

(NB The latter has always been the most popular post on my blog with lots of photos and many links to more photos, blogs, performers and suppliers.) 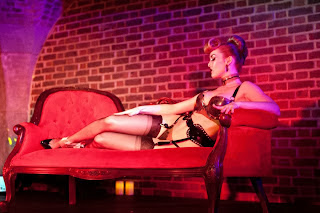 Email ThisBlogThis!Share to TwitterShare to FacebookShare to Pinterest
Labels: Erotica Fair, Events, Out and about