I hate housework and so does my maid

Sometimes I feel like a fraud, that I'm somehow not an authentic trans woman. The reason is that I've never owned a French maid uniform. (You know me, there couldn't be a serious reason!) Being a French maid seems to be a rite of passage in so many trans lives and is a stage I've missed out on.

Here I am today doing the housework in what for me seems an ideal outfit of old leggings and a T-shirt, which is pretty much what any cleaner these days actually wears, and I barely even thought about what I was going to wear. 25 years after finally accepting I was trans it's no longer a case of "shall I dress today?" but "what am I doing today and what clothes would suit?" I feel naturally drawn to wear what other women are actually wearing. I've arrived at the trans terminus!

But there's a niggle that somehow I haven't done the development to trans living quite correctly as I've missed out on the phases that so many seem to go through. The French maid is just the classic example of such a thing. Would doing my housework in a short dress, apron, heels and stockings enhance my cleaning? I can't see cleaning the shower or standing on a stool in heels like a very good idea and the risk of laddering stockings or dirtying the dress is very high. Am I just being really boring and practical? Or maybe I just hate housework and want it done quickly so never mind the flouncing about in an impractical outfit. Maybe working in a silly dress would make it more enjoyable but, truth be told, I dress as a woman not for the sake of the dresses or to look ultra feminine but because I live essentially as a woman and therefore it seems logical to look the part. I appreciate that the fetishy or submissive or ultra-feminising aspects of the maid role is a big part of the appeal to many, as it is for many such roles, but I guess my femininity has been so strong that that aspect of dressing has never come to the fore. Maybe I'm just dull but I don't see being feminine as a game. Don't get me wrong, being a TGirl can be a lot of fun, but I don't see it as roleplay. So I guess I'll just get on with my boring cleaning in my boring if practical weekend clothes. I still feel feminine, though, and how you manage to do so is up to you.

I am still on a high after Roz's visit last weekend, which was wonderful fun, if bad for the waistline. Yesterday I had things to do and buy and I revisted some of the haunts that Roz and I had been to, only this time on a dry day. On Saturdays there's a general market in Sanremo, and an antiques fair outside the cathedral. Although I think the word 'antiques' is a generous term for 'old stuff'. Some jewellery did appeal but I've decided to think about it. They'll still be there next Saturday. 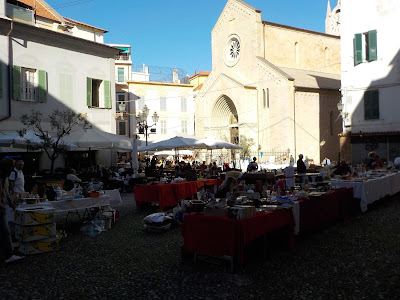 I also saw a handbag in a shop that might pass muster, at last. But the price tag is something to think about also!