I have a few social media accounts, opened 10-12 years ago. I guess this Blogger account counts as one, too. Like many, I felt a lot of pressure to communicate via these new tools. But I've always felt uncomfortable for various reasons. The first is a loss of privacy - not just by sharing your life with the 'online community' (i.e. almost anyone) but, more insidiously, by the manner in which the hosting companies trawl through your emails, browsing history and who knows what else to find your connections, interests, choices and so on. The Cambridge Analytica Facebook scandal that broke in 2018 should alert anyone to the dangers of these sites. Several friends (older ones, as it happens) have recently asked me to install WhatsApp on my phone. I looked at WhatsApp's terms and conditions and didn't like them so I haven't installed it. If that somehow curtails their friendship for me then maybe their values are slipping! I have never used Facebook on my phone for similar reasons.

This is the problem. The whole social media revolution is a haven for narcissism. The extroverts and exhibitionists love it as they get to show off their selected and carefully crafted public persona and obtain those necessary Likes and comments; the insecure need validation and those same Likes and comments. And, of course, the same extroversion and insecurities have their dark side: the relative anonymity and lack of direct contact with others creates a perfect environment for trolls and abusers to spout hate in a way that they would never be able to do when in the same physical space as those they are attacking. It is thus a coward's paradise, too.

Controversial topics were once discussed in debates and by panels - we had debating clubs at school and university. These are the best way of airing thoughts in a controlled environment with a chairman guiding and guarding the process and civility of the discussion: point, counter point, summation, questions from the floor, vote. Controversy and difference can be civilized. Not some polemicist staring maniacally into camera on YouTube aggressively spouting his beliefs with no counterweight other than a comments section that can be controlled by the account holder. There is moderation, albeit imperfect and ill-considered, from hosting platforms; but since it is largely algorithms making the decisions, the right of appeal is limited.

The banning of Donald Trump by Twitter (very late in the day) of course opens up a whole polemic on the power of these platforms. Their acceptance or rejection of users or their posts may be entirely arbitrary. The refusal to contain fake news, falsehoods, libel and malicious posting in any effective or consistent manner is very detrimental to society. The case of politicians who are elected being overridden by a company that is privately or shareholder owned and is answerable to no-one is not acceptable as it stands. These companies, as we have been becoming only too aware of during this pandemic, have become very potent supranational powers controlling public discussion, gathering data far better than governments do, and yet dodging taxes very effectively.

Of course, the polarisation of people is becoming more acute as you yourself weed out the people you dislike and the algorithms select people, services, posts, advertising and groups that are already attuned to you. A recent article in Le Scienze (the Italian edition of Scientific American) had a graphic of the polarisation of people on the main social media platforms. We have come to expect toxic exchanges and violent differences of view on Twitter, but the even more severe breaks between people with differing viewpoints on Facebook was alarming.

I don't like the gathering of data on myself. I opened a Flickr account not because I wanted to show off my photos (indeed, my favourite photos have never been put online) but to monitor what other people were putting out there with me in. More seriously, YouTube recently stopped me from viewing some videos by trans people on the grounds that they were age-limited and I would (after how many years with them?) have to prove that I was over 18. This was to be done by sending them my passport details or a credit card. Nice try, guys... I don't think so. Neither item being in my girl name is one point, no certainty or security about what they'll do with the info is another. This sort of increasing limitation on use until more personal data is supplied is becoming commonplace. And don't get me started on all those sites that tell you they use cookies and select which you agree to ... some days I wade through dozens of these. You select what you disagree with, then find you can't proceed unless you accept the whole gamut in the first place. Legitimate interest? It's just a legal override.

As far as Facebook goes, with just a couple of exceptions, I have no Facebook friends who are not friends in real life, for whom I do not also have a phone number and/or email or home address or other physical means of communication. So Facebook just becomes a tool for keeping up to date with real friends. I've never filled in the stuff about school, job, favourite films, etc., not even comedically. I have a Facebook filter on my browser which is intended to reduce their snooping. I am wondering, though, if I am going to use it much longer. One thing lockdown has given me is a renewed interest in what I used to do previously in down time alone: read, listen to music, watch good movies, do creative things like paint, write and cook. It's nice to read the stuff my friends post on Facebook - like a slightly zany news magazine edited by people I know - but the sort of desperate need to include validation for everything is not doing anyone's self-esteem any good.

Social media pose serious social cohesion problems and lack of accountability that democratic governments must now get to grips with urgently. We're losing the ability to communicate and socialise naturally, encouraging narcissism and abuse and being spied on in a way that Orwell never dreamed of. To anyone with some social media account - and that's pretty certainly everyone reading this - please be responsible with the technology and don't give up on real encounters with people now that we gradually move on from this pandemic.

This time last year I posted a link to two articles about TGirls in the 1960s in Genoa and Paris. I was looking through them again today and was again struck by how beautiful so many of them were, as art, as fashion, as history, as human life. 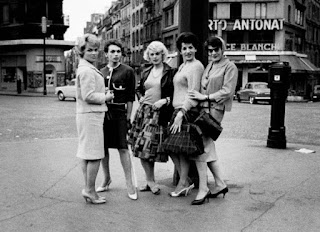 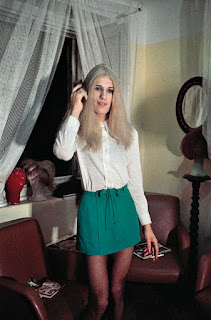