Hi, it's my girl birthday so I've taken the day off and am treating myself.

It's been a mild sunny day, about 19°C (66°F), which is nice for the time of year, so first I went to Sanremo town. There's a lovely promenade by the sea with beautiful palms planted 150 years ago, a gift from the Tsarina of Russia who enjoyed a holiday there. It's still called the Empress's Boulevard and it's a pretty spot on a bright day. 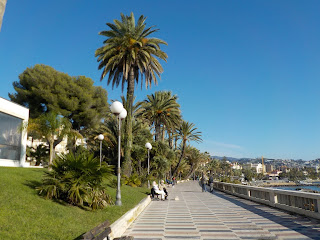 In Sanremo there is my favourite restaurant (Le Quattro Stagioni - The Four Seasons) and I treated myself to a long, lazy lunch. The fish is landed every morning and is as fresh as you can get.

And now at home I have done my makeup nicely and, as I write, I am having not a cake but an apricot lattice tart, which I prefer. I own some dragons so I squeezed one to light the candle with its fiery snout! 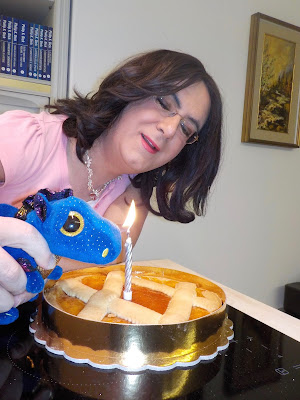 And he and his brood made a party of sorts. 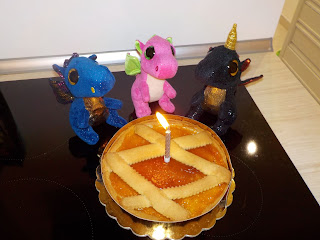 Well, normally I'd have had friends round but you have to make do in these crazy times when travel is difficult. Besides - a little secret, sshhh! - it's not my actual birthday, it's just a date I chose years ago to celebrate my girl life, which falls during Trans Awareness Week. I'm determined, with so much strife going on generally and so many attacks on trans folks, to find the positives. So celebrating my girl birthday is one.

Here are some other positives, gleaned just these last few days.

- The Sunday newspaper supplement for titles published in North-West Italy devoted its main feature to transgender lives and realities, a good neutral guide for laymen. They interviewed 5 trans people, 2 MtF and 3 FtM, a good ratio as not so much is heard about transmen and I think they gather less opposition. For improving public awareness, I thought this feature was good.

- In Hungary, there was massive support shown for the LGBT community from bands attending at the MTV Europe Music Awards, in defiance of that country's current repressive policies.

- In the UK, singer-songwriter Billy Bragg has defied criticism to make some of his earlier lyrics more trans inclusive.

A gay friend of mine reasured me the other day that, despite what some governments and a lot of nasty groups want, public opinion has very much come round in favour of the LGBT community in the last few years, as many referendums and polls show. For instance, just this autumn, Switzerland voted clearly for gay mariage with not a single canton dissenting. I wonder if our opponents aren't getting a bit desperate.

Femulate and the opposition

Thank you to Stana of Femulate for featuring one of my favourite pics the other day. I link to her post here not from vanity but because the main point, from Diana (her original post, Fluff), is that there is a lot of pressure on trans lives from a variety of nasty sources but resistance doesn't seem to gain much traction online. I know readers are already exhausted with bad news and go online to relax ... which is why I try to point up the positives, as above, but trans poeple and allies need to be alert to the ever-increasing restrictions being imposed on us in many places. I'm sorry, but despite the good stuff, we still have a problem.

I was also reminded this week of multiple grammy award winning composer Wendy Carlos, a trans woman, whose scores include Clockwork Orange, The Shining and Tron and who was an early developer and player of the Moog sythesizer.

I like this brief article about her, with a short BBC interview (from 1989) as she goes about her work.

It's amazing what trans people can do if you just let them get on with their lives.