Authority, luck and us

I've been away this week to try to complete the last things required to settle in what unexpectedly became my new home, in Italy. Considering I first moved here in 2018, it's been a ridiculously long time dealing with this. Yes, Covid is partly to blame but also both the notoriously draining and stupid bureaucratic systems there are in Italy and the shambolic, abusive way the UK left the European Union and most other European organisations. Let me be blunt: I hate government and its ways. In the same way that you are of a nationality if a government decides you are, you are M, F or trans if a government acknowledges you to be, never mind what nature chooses. The false narratives of nationalism and statecraft make me sick.

There are some nice photos of Milan below to show my trip had highlights, too. But just to summarise, I first went to the forbidding, fascist-built courthouse to get a birth certificate created as my one is unsuitable for registration with the local council. Go figure. The court staff were lazy and abusive and tried to give me the runaround. The more I insisted that they were to do what was requested in their very own instruction book, the more abusive they became but I managed to get them to accept all the required forms in the end. They really don't want to do the work, do they? But that's what happens when you give someone a guaranteed job for life. They were abusive to all the other members of the public there, too.

What a contrast with my bank who were more than helpful with various changes I needed making.

The next day I went to apply for a passport. This is done at specialist police stations and, again in complete contrast, the police were smiling and jovial and cracked jokes with the applicants and even called them by their first names. It looks like it's fun being a cop! Who knew? Well, maybe it's fun if you can sit in an office chatting with the public rather than chasing gunmen or clearing up murders, so maybe that's why they were all smiley. Anyway, a much better experience. I might even get a passport out of it. I say might as nothing ever seems certain these days.

Here are your classic tourist highlights of Milan. A huge medieval cathedral with 4000 statues, 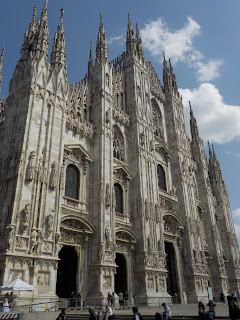 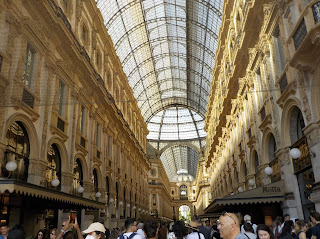 the world's leading opera house (La Scala). And perhaps most amazing of all are the trams, nearly 100 years old now, which have plied the streets every day since 1928. Here's one in front of La Scala: 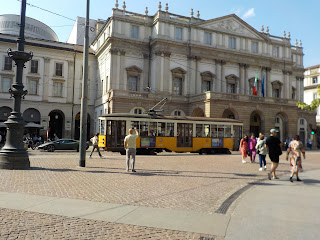 Going back to the arcades that link the cathedral square to the opera house square, two little known cultural facts are that the glass dome had a "gas rat" and the mosaic floor beneath has some lucky testicles. Yes, you read both those right.

The arcades were originally lit by gaslight at night, which required a team of lamplighters to go round in the evening to light the gas burners. But sending men to light the burners in the dome would have been difficult so the architect designed a little mechanical lighter on wheels that would trundle round the base of the dome lighting each lamp in turn. People would turn up just before dusk for the pleasure of watching the "little rat" do its round to illuminate the dome.

On the floor there are mosaics symbolising cities of Italy: a white cross for Milan itself, a wolf for Rome, a winged lion for Venice and a bull for Turin. 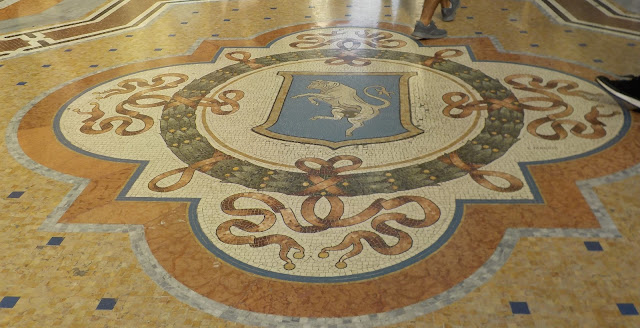 When in Rome there's a custom that if you toss a coin over your shoulder into the Trevi fountain, then you will return to Rome. (Or you could just set yourself a reminder on Booking.com). Here the tourists stand on the bull's testicles and spin three times. This is said to bring good luck. So this is what these tourists are doing: 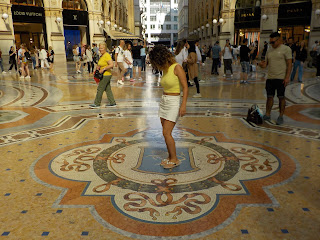 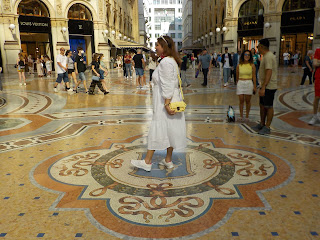 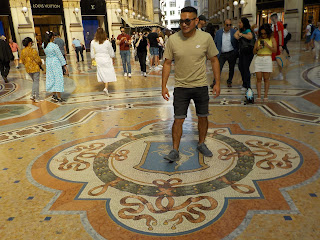 It may bring luck here but, elsewhere in the world, treading on a bull's particulars is considered inadvisable. I have no idea how these mad notions arise, but I post this here for you to muse on any truths and cultural indications that may come to mind.

I have a feeling that people's beliefs in magic and luck and invocation and prayer over the ages represent means of dealing with impotence at the encroachment on our lives of the rulers of the world. You get a passport to travel if officials say you do; whereas our ancient ancestors wandered where they pleased and any bad places or events could be walked away from. As humans settled, kings and priests demanded taxes, tithes and tribute, and bureaucracy took hold. How to combat their encroachment? By getting some gods or spirits to intervene on your behalf. So, frankly, gyrating on a mosaic bull's testicles is as good a method as any of trying to have things go better for you.

As usual, my passport and birth certificate will have a big fat M for male on them. Yet these state entities demand my respect and my taxes.