I am pleased to hear that the new man in Washington acted immediately to end discrimination against LGBT people and that the White House website has reinstated its LGBT pages that were wiped as soon as Trump came to power. It seems the new president will also end the ban on trans people in the US military any day now. This can only be good news for the trans community in the USA and help influence other governments too. This time four years ago I expressed forebodings about Trump's regime (Farewell Mr Obama) but it turned out worse than I (or anyone else) expected. Trans people deserve a break from the hate and need time to recover and build. I am optimistic.

I used to work in government, until it dawned on me that the main purpose of government is to brutalise. Authority is an imposition that plays on fear and hope in similar measure. It's bullying by another name. Who you are or what you do is usually subject to approval from callous officials and narcissistic politicians who change outlook and attitude in pursuit of their careers. I have some sickening stories involving some pretty evil people from my days in the ministries in London. Next hallowe'en I might sit you down by the fire and tell you them. Brrr!

I am trans because that is how nature made me, yet getting professional help or public recognition or avoiding discrimintion involves the intervention of government that will either help or harm depending on the prejudices of its members, its staff and its voters. In 2018 I wrote this post explaining why I won't approach doctors or clinics about being trans (Why I won't ask my doctor ... ). Following the Trump experience, and Britain's chaos and discrimination in the last 5 years, and the genuine possibility of fascism returning to Italy, one has to be cautious and not hope, assume or rely on governments to act or continue to act in our interests. In relative terms, news from Washington is good, at least for another four years.

What makes me most hopeful for the trans future, though, is that a young generation has been growing up with far fewer prejudices about gender and sexuality than there used to be. And simply making our presence known by being out, by being visible, makes people aware that we are just trying to get on in life like anyone else. We haven't yet reached critical mass to ensure that being trans is no longer something to discuss but is just accepted, but slowly we'll get there. So the shift in US government policy is another small step in the right direction.

This illustrated article from The Paris Review about a short-lived trans magazine in Weimar Germany, The Third Sex, is worth reading. It also shows how some found their true selves under one regime ... only to lose that opportunity under another.

A Lost Piece of Trans History 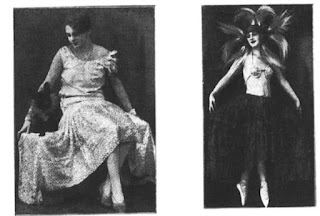 Email ThisBlogThis!Share to TwitterShare to FacebookShare to Pinterest
Labels: Being trans, Politics